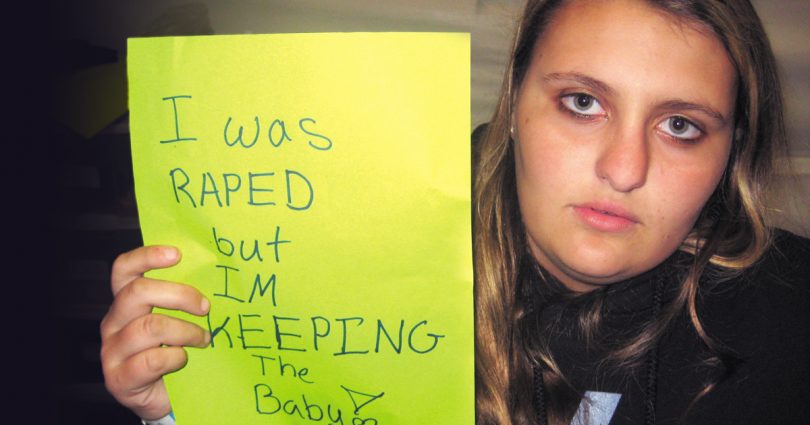 Last August, while running a Rock for Life booth at the Spirit West Coast music festival in Monterey, California, I had the honor of meeting Mandi, a remarkable young woman with a heart for pro-life work. For three days, her joyous personality uplifted our spirits as we sought to change the hearts and minds of young passersby. With literature in her hand and a baby six and a half months of age in her womb, Mandi taught everyone around her, bringing many to a greater respect for life and some even to tears. Aside from her wealth of knowledge, she carried a powerful weapon—her own true story. After all, the child inside of her had been conceived during rape.

Mandi grew up with her dad. At age 17, she was in Sacramento, California finishing her senior year in public high school, where she was valedictorian and one of the most popular girls among her peers as well as the faculty.

A few nights before Christmas last year, Mandi went to her best friend Brandon’s house. They had known each other for seven years. Brandon mixed cocktails and the next thing Mandi knew, she awoke on the couch. Thinking nothing of it, she was shocked to see what Brandon’s brother Corey discovered two weeks later.

Brandon had drugged Mandi, raped her and videotaped everything. Horrified and fearing that others would see it, Mandi destroyed the tape.

“When I found out that I had been raped, it hurt a lot because I was a virgin and I was waiting for marriage. My boyfriend Daniel and I had been dating since he was 19 and I was 13, but he never pressured me,” Mandi said. “It was really hard to think that someone could take my virginity from me so fast.”

At her mother’s insistence, Mandi was on the pill, but it failed. After destroying the tape, Mandi found that she was pregnant. As weeks turned to months and the new person growing inside of her began to show, Mandi told her father. Afraid that he would be too upset about the rape, Mandi withheld that fact from him and almost everyone else.

Mandi’s father, a Christian pastor, was embarrassed about his pregnant unwed daughter, so he forbade her from attending his church. “He said that if I didn’t get an abortion, he would kick me out,” she recalled. Mandi had always been pro-life, but she was terrified of being thrown out onto the streets. Confused and feeling alone, nine weeks into the pregnancy, Mandi scheduled an abortion. “I didn’t want to do it,” Mandi told me, “but it was just the only option I thought I had.”

With only two days left until the dreadful appointment, Mandi finally told Daniel, who was away at college. He supported her and told her not to have the abortion. Then Mandi’s friend Megan said, “You can’t have an abortion!” Megan used the internet to show Mandi aborted babies, sonograms of preborn babies and facts about how abortion harms mothers, physically and mentally. That did it. Mandi decided against the abortion.

Despite being a model student and volunteer at school, Mandi’s principal threatened to expel her and teachers were disapproving too. Day after day, Mandi’s onetime friends injured her with presumptuous slurs. Worst of all, she had to face the rapist at school and he had no remorse. When Mandi asked Brandon why he did it, he said, “What’s the big deal? I only did it one time.”

By the end of the school year, the scorn was unbearable. Therefore, Mandi skipped her prom and graduation ceremonies, and moved to her mom’s house near Las Vegas.

Daniel to the rescue

When Mandi’s mom learned that her daughter would keep the baby rather than give him up for adoption, she kicked Mandi out of her house.

Daniel took Mandi into his home and kept their relationship chaste, while vowing to marry her and adopt the baby. When Mandi tells Daniel that he’s “amazing,” he denies it, saying that he simply knows what’s right, so he does it.

Mandi forgave Brandon, but obtained a lawyer and pressed criminal charges. She said, “It was really hard, because we were best friends for so long and I was just scared of facing him in court.” Corey came to Mandi’s aid and found a copy of the video on Brandon’s computer, so the trial and judgment were swift. Now Brandon has begun serving 28 years in prison.

Amid all the turmoil, on August 13, 18-year-old Mandi became Daniel’s wife. On August 20, Connor was born early. While his body was tiny and frail, Connor’s energy and innocence changed Mandi’s life. She and Daniel had Connor baptized. Then, after struggling in a hospital, little Connor’s heart gave out and he went home to his heavenly Father two months after birth.

Many things are still in flux. The pro-life friends Mandi met at Spirit West Coast, including Survivors of the Abortion Holocaust and Rock for Life, provide moral support. Relations with Mandi’s parents have improved and Daniel’s family is lovingly supportive. Now Mandi and Daniel are expecting another child.

There are many lessons in this story and I’ll leave them to you as I let Mandi have the last word. She said, “If I didn’t have Daniel and God, I wouldn’t be happy now. I never imagined that marriage could be so good and I can’t imagine what my life would’ve been without Connor.”

Phil Eddy is a former Chapter Program and Street Team director of Rock for Life.