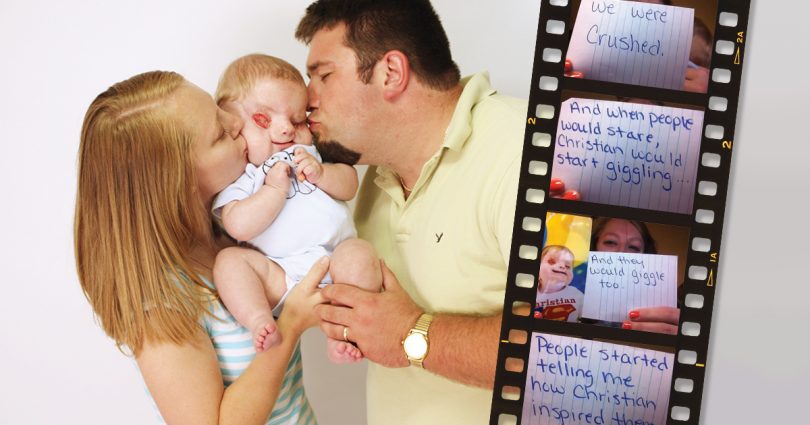 A mother’s love is more powerful than any force on earth. In March of this year, that love led Lacey Buchanan of Woodbury, Tennessee, to post a video of her son on the YouTube video website and GodTube (a Christian version of YouTube). OnYouTube,  Lacey’s caption for her video states, “This is my plea to anyone considering abortion. Rethink your decision, no matter the circumstances. I am so glad I chose life!” On GodTube, her video is titled The Right Choice and features this caption: “This video is about my son, Christian, and the decision I made to give him life, when others were telling me to abort him. He is an amazing little boy who has God all over him, and I want to share him with the world!”

Lacey’s video tells the story of Christian, who was born on February 18, 2011, with a Tessier cleft, which resulted in a cleft lip and palate, as well as microphthalmia or “small eyes.” He is one of only about 50 people in the world with this condition. To correct his disability, Christian has already had several surgeries and will probably have to undergo over 40 more, as well as the placement of prosthetic eyes.

The roughly seven-minute video shows Lacey holding Christian with his head turned away from the camera. She holds up note cards that tell the story of Christian’s birth, and the feelings she and her husband, Christopher, felt both during and after her pregnancy. Lacey’s face also tells her son’s story, through smiles and tears, and at the end of the video, she proudly turns her little boy’s face to the screen.

Within days, tens of thousands of people had watched The Right Choice, and within a few months, it had attracted high-profile national and international media attention, as well as 11 million viewers. http://christianbuchanan.blogspot.com/

In an interview with Celebrate Life, Lacey explained that she got the idea to post a video from Lizzie Velasquez. This courageous young woman posted a video on YouTube in which she holds up note cards in front of her face to describe the extremely rare syndrome she suffers from. At the very end, she reveals her face.

“Some of the comments on this woman’s video were just awful; one of them actually told her to do the world a favor and put a gun to her head, just because of the way she looks,” Lacey said. “That broke my heart and had me mentally replay some of the ugly comments we’ve gotten about Christian. No one has ever told me something that extreme, but I began to wonder what I would do if someone said something like that to Christian, if he was old enough to understand it, and how I would explain it to him.

“How do I make sure he knows that’s not the truth? It hit me that I have a story to tell, and I can make people aware of Christian and of my love for him, so maybe other people will grasp and understand that they see something deformed, but every time I look at Christian, I see my son.”

Lacey now regularly posts videos of Christian on her YouTube channel, where viewers can watch Christian in his music therapy sessions, playing, and engaged in other activities typical for a toddler. She also maintains a fan page on Facebook, the popular social networking website, where she connects with people from all over the world, and discusses children with special needs and their rights. And she blogs about the family’s life with Christian at Leading the Blind.

Every child is a gift

Lacey recalled that before she posted the video about Christian, people would react strongly upon seeing him for the first time, gasping out loud or even asking her directly what was wrong with her baby. One comment she received was particularly upsetting, because she and her husband, Christopher, had tried very hard to have children before Christian was born.

“A girl (through Facebook) told me I was a horrible, selfish person for not aborting Christian before he was born, because [according to her] he will live a horrible, miserable life, and that I should be ashamed of myself,” she said. “This girl knew nothing about how long and how hard we prayed for him to live, and how we prayed for him to be okay and how we fought for him. She had no idea what battle we had been through even before he was born. For her to say that was pure ignorance.”

She added, “Every child is a gift and not meant to be a burden. There was a time I thought I was burdened with the special needs, but it isn’t true. You are given a gift, but it is in a different package. If you terminate a special needs pregnancy, you’re throwing away a gift. If we had aborted—there is nothing wrong with him mentally or internally; he has a physical abnormality—that’s like aborting a baby because he is missing a hand. That child is still functionally perfect. … At first I thought it was the end of the world because he does have these problems, but it turned out to be a huge blessing—not the fact that he has problems, but the fact that I get the privilege of raising such a special and amazing kid.”

The cause of Christian’s condition is a mystery, since Lacey and Christopher both underwent genetic testing and the results were normal. The only possible explanation for what happened to Christian is that it could have resulted from the miscarriage Lacey almost suffered in the first weeks of her pregnancy. “He held on, because he’s a little fighter,” she observed.

“Christian’s story can inspire people in so many ways,” she continued. “Parents should never give up their hopes and dreams for their kids just because they are different and they have a special need. I know so many special needs families that keep their kids hidden to protect them, because the world is nasty. I refuse to do that. I refuse to hide Christian’s face, and I refuse to keep him from living a normal, active life. I hope that our story gives other families like ours the courage and strength to do that. I hope our story also encourages non-special needs families to be more accepting.”

While Lacey’s refusal to hide her son from the world shows remarkable strength, she readily admits that her own resolve comes from above: “From before I ever got pregnant until now, I can … see how God was preparing my heart and my trust in Him, to be able to face this challenge. Throughout the pregnancy, He gave me peace that passes understanding and unspeakable joy in the face of heartache. Since Christian’s birth, He has protected me from hate, jealousy, depression, anger, bitterness, and a million other things that could so easily ensnare me in the challenges I face. He has strengthened my trust in Him even more and put His love for me on display through my son.”

The strong faith of little Christian’s parents has paid off in other ways as well. “The Buchanans received ample support from friends and family, and from their local Baptist church, which has held multiple fundraisers for Christian’s medical care and constantly checks in with the couple to inquire how their son is doing,” ABC Newsreported on May 12.

Lacey is now enrolled in law school and plans to focus her future law practice on disability advocacy, social security law, and special education law. She wants to share her love for Christian with the world and spread it to other families: “I am excited to be able to help other people like my own family. I think people who have kids with special needs get this extra measure of love that they get to use, because it changes your whole perspective on life. All of your problems seem petty, because it teaches you so much about life. The hardest things in life produce the greatest joys, at least in this case. We’ve had our share of hard times but we’ve also had a lot of joys that a lot of people never would have gotten to experience.”