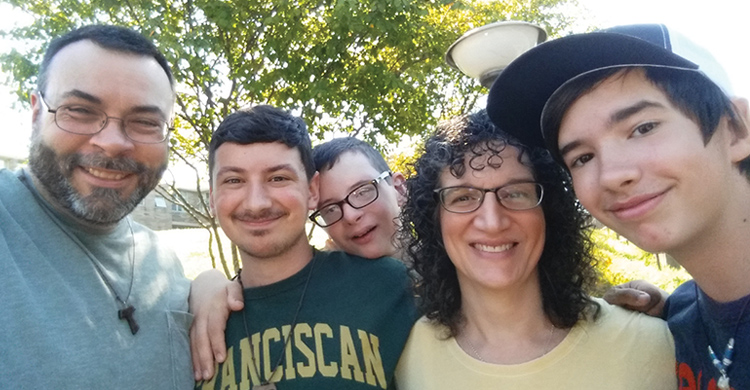 Sam Crean, a teenager with Down syndrome, has a great family and a great life

Fourteen-year-old Sam Crean thought patiently before happily choosing his father, Mark, to lead their group of family and friends, who gather weekly for Thursday night Holy Hour, in the First Joyful Mystery of the Rosary.

Along with their loved ones, Sam’s parents sat together in prayer, much as they did 14 years earlier after a concerning ultrasound discovery left them seeking God’s guidance.

“They had noticed something abnormal in one of my routine ultrasounds,” Denise, Sam’s mother, said explaining that a follow-up ultrasound revealed a list of potential medical issues, including Down syndrome, which their preborn son might have had. “The doctor started telling me I needed to decide quickly what I wanted to do and [for me] to know all my options.

The gift of life is so precious

The Long Island couple—who had two small children and had already suffered a miscarriage—quickly sought out new physicians after being pressured by their doctor to consider an abortion in light of their preborn child’s medical situation.

“I didn’t know why God was choosing us for this, but there was no way we were going to be talked into terminating the pregnancy,” said Denise, a special education teacher who currently works as an early intervention provider. “The gift of life is so precious.”

Pressure from the medical community, society’s obsession for perfection, and the worship of “self” has fostered a culture that promotes and encourages abortion instead of a culture that prioritizes life and respect for all human beings.

Maaike Rosendal, a speaker for the Canadian Centre for Bio-Ethical Reform, pointed out that the way to end abortion is to advocate on behalf of the preborn from the moment of creation.

“Abortion is widespread because, as a society, we’ve dehumanized the victims and don’t have to look at the result,” Rosendal said. “Each child deserves human rights from the moment (s)he comes into existence.”

Trusting in God and accepting His will, Denise and Mark also prayed over the decision of whether to undergo prenatal testing to confirm the results of a special ultrasound, which had indicated that Sam most likely had Down syndrome.

“I know some people would question why we would want amniocentesis,” Mark said, explaining that genetic testing was the only definitive way to tell whether Sam had Down syndrome. “Because, let’s get over the uncertainty and let’s focus on what we could do. God was going to ask this of us and we were going to try being the best parents we could be.”

Now—with full knowledge of Sam’s disability as Trisomy 21, also known as Down syndrome—Mark and Denise could ensure that early intervention therapy, feeding therapy, and physical therapy were set up in preparation for Sam’s homecoming. Both parents also began to learn sign language, since Sam’s cognitive ability was advancing faster than his verbal.

A prenatal diagnosis can provide benefits

“Prenatal diagnosis already provides a medical benefit by identifying high risk pregnancies that may require more aggressive prenatal care and to better prepare [parents] to receive a child with a disability into their family,” Bradford said. “A positive prenatal diagnosis doesn’t have to be a death sentence.”

Rosendal agrees that prenatal testing can lead either to harm or good and that we must communicate to our culture that abortion is wrong and that each child deserves the right to live.

“An extra chromosome only heightens, not lessens, our responsibility,” Rosendal said. “Everyone who believes that all human beings have human rights should deeply care about the fact that many human beings are denied their most basic human right—the right to life—simply because they’re different.”

In countries such as Iceland and Denmark, the denial of that basic right is only rising for preborn babies diagnosed with Down syndrome.

As the Copenhagen Post reported, “If current health policies and trends continue, Denmark could be a country without a single citizen with Down syndrome in the not too distant future.”

In the United States alone, the number of individuals living with Down syndrome has decreased by 30% since the early 1970s—Bradford said, referring to a paper published in 2015 by Gert de Graaf, Frank Buckley, and Brian G. Skotko.1 There are growing concerns that the percentage of abortions for preborn children diagnosed with Down syndrome will only continue to rise.

“Since 2011 in the United States and [with] the arrival of so-called noninvasive prenatal screening, that fear has escalated because the tests are so simple and so accurate,” Bradford said. “It is important to remember, though, that while it is true that prenatal testing facilitates abortion, there are families who receive a prenatal diagnosis of Down Syndrome, or another disability, and still choose to have their babies.”

For Denise and Mark, when Sam was born on September 20, 2002, they remember only perfection.

Growing up, Sam was raised in a loving, Catholic environment that provided him with the resources he needed to reach his full potential.

“We had to decide very early that we had to learn to let Sam lead us and not pre-judge what he can and can’t do,” said Mark, who works as the director of care coordination at United Cerebral Palsy of Long Island. “We were going to try to follow his capability and continue to promote his independence and growth, but we had to learn how to listen to him in terms of his development.”

He also pointed out that it is a disservice to stereotype people with Down syndrome and claim them to be any certain way.

Shannon French, the president of the board of directors for the International Down Syndrome Coalition, also believes it pertinent to address the myths and stereotypes placed on people with Down syndrome.

And just like anybody else, Sam is developing into himself and is bringing his own unique abilities and interests to the table. He especially enjoys listening to affirming music from artists such as Matt Maher, Chris Tomlin, and Third Day, and all while keeping busy with his two older brothers, Max and Jason.

“All three of us love to play video games together,” said Max, who is in his second year at Franciscan University of Steubenville. “Sam also loves to play the board games Sorry and Uno, and sometimes we’ll just sit, talk, and spend time together.”

But for the brothers, the numbing fear that they might not always be around to protect Sam from a society that glorifies perfection haunts Jason.

“I’m very grateful to have Sam just the way he is. I wouldn’t want to change anything about him,” Jason said, explaining that he’s already defended Sam in the past from the cruelty of other kids, including his own friend. “I do get very worried about him. When he gets home from school, I try to see if the kids were nice to him. I wasn’t sure if he would be able to understand if kids weren’t being nice.”

Every human being has a purpose

Donna Crean, Sam’s aunt and the center director for the Life Center of Long Island in Deer Park, New York, believes that God has a purpose for all His people and that all should be celebrated for who they are . . . not just what they can do.

“Our disabilities don’t define us, so who are we to judge or look down upon someone with ridicule?” Donna asked. “My hope is that society will stop focusing so much on the disability of the person, rather they will focus on their personalities.”

Besides working in the school store or playing on the basketball court, Sam makes sure to take his God-given talents back to the church where he serves at the altar alongside his brother, Jason.

Although not particularly fond of early mornings, the Creans have all made the sacrifice to support Sam and attend the 7 am Mass regularly, which was the best Mass for Sam to learn how to serve as an altar boy.

“We’re the only ones in the parish who will serve the 7 am Mass, whether we wanted it or not,” Mark said, laughing along with his wife. “We’ve been very blessed that our children have been open to God’s grace. Sam loves the Lord, he loves the Rosary, and he loves the Mass.”

Denise Makowski lives in New York with her husband. She earned her BA in journalism from Stony Brook University, where she founded the SBU Students for Life, and is currently pursuing a Master’s Degree at Queens College. She is a pro-life journalist and has written articles tackling the lies of Planned Parenthood, the beauty of life, and the work of pregnancy resource centers.