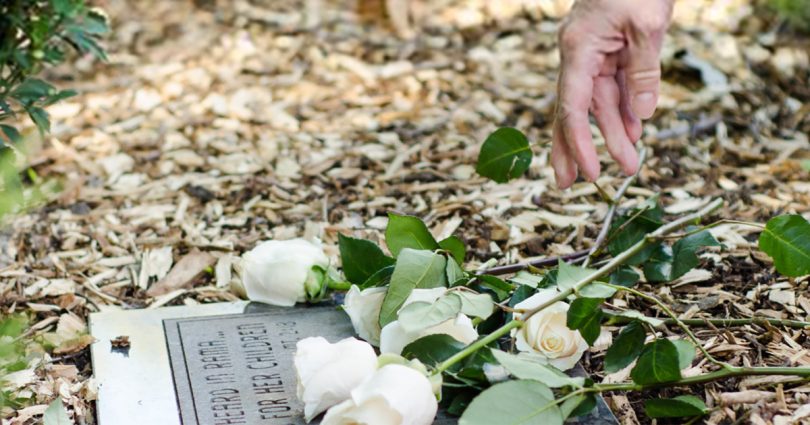 It has been said that you are truly forgotten after the last time someone speaks your name aloud. It’s a sad fact of life, one nobody really likes to think about. In fact, being forgotten ranks high on the list of some of the greatest fears we face as human beings. That’s why it’s so important to keep alive the memories of our loved ones—to share stories, to pass along wisdom, to tell future generations of the ones who have gone before us, and to honor their memories.

But what about those who never even had a name to remember? What about those who were forgotten or discarded before they had a chance to breathe air? This is the cruel reality of abortion. And so it is up to us as pro-life people to not only give these dead children names but to keep their memories alive, to tell others about them, and to share their stories in the hopes that the brutality of their deaths will help others understand the evil of abortion.

The day of remembrance began on the 25th anniversary of the burial of 1,500 abortion victims in Milwaukee, Wisconsin, as a joint project of Citizens for a Pro-Life Society, Priests for Life, and the Pro-Life Action League. In conjunction with this burial service, over 100 memorial services were held in other states across the nation. The idea was then born that this event should occur annually.

According to the National Day of Remembrance website, “Tens of thousands of [aborted babies] have been retrieved and buried at gravesites across our country. The stories of how they were killed, how they were found, and how they were buried, along with the pictures and videos that document those events, are powerful tools to awaken the consciences of our fellow citizens.”1

The website (nationaldayofremembrance.org) provides a list of these burial places in each state, but even if there isn’t one in your city that you can visit, you can participate by offering a Mass, saying a Rosary, praying in front of an abortion clinic, or doing something to show that you remember these nameless children.

As we think about these tiny children and the lives cut short too soon, we must never forget that there are over 3,000 abortions per day in the US alone. This tragic loss of life leaves us with thousands of dead and nameless babies.

Our Lord and Creator has not forgotten them, so we must not either.

While thousands of abortions occur every day, two especially heinous events have made the news over the past few years. One involves an Indiana abortionist named Ulrich Klopfer, who was considered one of Indiana’s “most prolific” abortion providers and who performed “tens of thousands” of abortions during his career.2

Klopfer died in 2019 at the age of 79, and after his death, his family made a grizzly discovery. In his home, the family found the decaying remains of 2,246 aborted babies. They found the remains of an additional 165 babies in the trunk of one of his cars. All were thought to have been from the early 2000s.

In February 2020, these babies were all placed in a mass grave in Indiana, and a funeral service was held. According to ALL supporter Stephen Kappes, hundreds of pro-life people attended, assuring those babies and the world that they would not be forgotten. Though their sexes were not all known, names were given to each of the children. Mourners wept their senseless deaths and the manner in which their tiny bodies were held, rotting for so many years. To this day, those involved in the finding of these babies, in the research into Klopfer’s life and actions, and in the planning of the funeral service ache when they think about the cruel and inhumane manner in which these babies were treated.

Recently we witnessed another example of discarded babies when in March of this year pro-life activists standing in front of a Washington, DC, abortion clinic stopped a man carrying medical waste and asked to see inside the container. They had a suspicion that they would find the remains of aborted babies, and they had hoped to honor those babies by giving them funerals. What they found shocked and disgusted them. Inside that container were the bodies of 115 aborted babies—five of whom looked so large that they were thought to have been late-term abortions.

DC officials took the bodies of the five late-term babies and released the other 110 so they could be buried. Fr. Bill Kuchinsky, American Life League’s spiritual director, presided over the funeral Mass and burial of these babies, showing them and the world that these babies mattered. Fr. Kuchinsky said that a gravestone will be designed for these children, but for now a nearby statue of the Immaculate Heart of Mary watches over them.3

These graves in Indiana and in Washington, DC, are just two of the sites people can visit on September 10, 2022—this year’s National Day of Remembrance—to honor and remember these victims of abortion.

We live in a world where many call the murder of preborn babies a “choice,” where people skim stories about the deaths of tiny babies and dismissively click to another story, and where organizations like Planned Parenthood tweet that having multiple abortions is okay. But the murder of innocent children is never okay; preborn babies deserve better. They deserve life. And the ones who have already died deserve to be remembered. So let us set aside time this September to tell these babies—and the world—that we have not forgotten them.

To find your local memorial and learn more about the National Day of Remembrance for Aborted Children, visit nationaldayofremembrance.org.