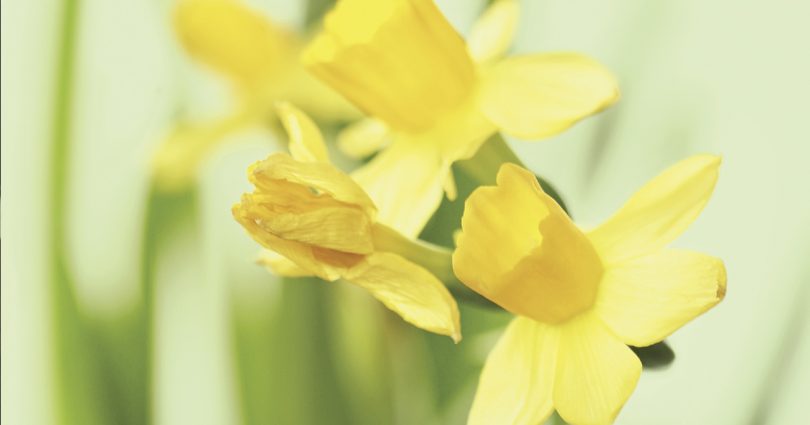 Daffodils trumpeted, white lilies sang with spotted tongues, and the church vibrated with resurrection and redemption—of all humankind and all creation. But it was hard for me to join the Easter celebration. The joy of new life was palpable yet unbearable, because I was mired in a Good Friday sense of loss I couldn’t shake.

A few weeks earlier, my first pregnancy ultrasound had cast doubts on the health of the baby I was carrying. We were told that if the baby survived, he or she would probably be very disabled. We were then given a week of waiting for another ultrasound appointment.

During the second ultrasound, the technician was silent. I watched the white fuzz of the screen, looking feverishly for movement telling of a heartbeat. The obstetrician used the clinical term “fetal demise.” He recommended surgical removal, “to avoid hemorrhage.” But I’d come to the appointment alone and wanted to talk with my husband before scheduling.

The miscarriage started mere hours later. I knew what to expect, as I’d miscarried before. And I’d spent the last week reading every article I could find on miscarriage, none of them telling me anything new or contrary to my prior experience. It all began very familiarly: cramps and bleeding. But I wasn’t prepared for what happened afterward.

Hard labor for a loss

After being awake for eight hours through the night, my main concern was pain relief. The pain kept building, building, building. When the OB’s office opened, I left messages telling the staff I was miscarrying already and didn’t need the surgery, and I asked if it was okay to take pain relievers.

After hours of no response, I began worrying that something was going very wrong—a rupture, a complication? Nothing in my life, not even appendicitis, had brought this much pain. Finally, a nurse suggested I come into the office, and I called my husband at work. Nick found me lying on the floor, pinned to the carpet by what felt like heavy machinery bearing down on my pelvis.

As he drove, I lay across the backseat, clutching the seatbelt, and starting to notice that the pain was coming in predictable waves. After sitting in the waiting room, gripping the arms of the chairs, white-knuckled, I couldn’t sit any longer. Between the waves of pain, I walked back to the nurse’s station. I saw the OB approach as I doubled over the side of a chair, gasping, “It’s like—” I had to stop speaking. “Like I’m in labor!” I finished when I could grasp a new breath. It was a revelation to me that labor could be the way to miscarry a 10-week baby. The OB scoffed at me for not knowing that already and not getting myself to the hospital.

Nick careened around street corners as he drove me to the hospital emergency room. While I was expected to sit and provide information needed for the paperwork, I doubled over, unable to speak for minutes at a time. I’d grown accustomed to breaks in the pain, so I waited and waited for even a few seconds of letup, but it just didn’t come. I felt wild, out of my head, not knowing what to do or how I could possibly survive the unrelenting, searing pain. I ceased to be aware of others in the waiting room or even my own actions.

Then suddenly, the sensation of pain ebbed away, like ocean water receding. Realizing I was free of its grip, I unfolded my torso and regained a seated position, breathing like a woman who had just escaped drowning. Warmth flooded my abdomen and settled between my thighs. Minutes later, I was wheeled into a room. There I found the source of the warmth: my baby—encapsulated entirely in the amniotic sac, the size and shape of a pear. My husband and I waited in the empty room.

When medical personnel entered, they spoke as little as possible—and in a subdued tone and clinical language, with no attempt at explanation. I left a few hours later, the remains of my baby having been locked away in a biohazardous waste bin and the remains of my shredded heart trembling as they pumped blood to my shaking limbs.

The next day, when I went to my OB’s office for the follow-up appointment, he assured me the ultrasound taken after the miscarriage confirmed that I’d cleanly passed everything I should have, and there was now no risk of infection or complication. I listened plaintively, saying very little, knowing I had to choose my words carefully, because the first few I said would be the only ones to break free before my lips wobbled uncontrollably.

The OB didn’t hide his irritation very well. “Why didn’t you go to Labor and Delivery, instead of the ER?” I stared, dumbfounded. How was I to know I was supposed to do that?  “And if you’d gotten the surgery I recommended, you could’ve avoided all this.”

I wanted to remind him that the day he’d suggested would have been too late. I tried to control my lower lip.  I finally spoke. “Why didn’t you tell me?”

“That it could go like that—that I could go into labor?” I wondered if he could understand my words compromised by sobs. “I thought miscarriage at this point was just a heavy period.” Every piece of literature I’d found said as much. I’d heard that second-trimester miscarriages were different, but nothing unexpected was described for a loss in the third month.

“What else did you think would happen?” he responded, with something much closer to contempt than compassion.

I walked back to my car with only more scar tissue.

I continued to let my shadow live in the world that didn’t understand or recognize the reality of what had happened: the loss of a real baby (whose body was then lost by being dumped as medical “waste”) and the terrifying ordeal of my unexpected labor to deliver her. Later on, at an appointment with a different OB, when I expressed my concern about all of this happening again, she said with a condescending smile, “That wasn’t labor—just bad cramps.” My sorrow over losing my baby was compounded by how little regard there was for both experiences.

The utter dismissal, by my OB and the hospital staff, of the power of the life that started within me—and the power of my child’s exit and death—made me doubt myself. One OB blamed me and told me my hardship was the fault of my ignorant choices, and another suggested I was melodramatic and had a low pain tolerance. What if they were right?

I also felt supremely disrespected by the way I was handled. It was clear that, for them, medical “care” of a pregnant woman stops once the baby dies, because the woman is only as important as the status of  “the fetus,” and “the fetus” is nothing without his or her potential to be born alive.

I now know that that labor for loss was, indeed, 90 percent as challenging as my later live births, but because my baby was already deceased, my expected miscarriage didn’t warrant my education or preparation—let alone assistance and support as I delivered in a roomful of staring strangers.

That Easter, in 2006, was lost to me, even as I clung to Jesus. I was curled up in my bed, and my husband brought me our cat for comfort as I stared through the wall as if I could see the yard, imagining where the place where tiger lilies grew. That was where I wished my baby had been buried.

But the next Easter was very different. I stood enraptured in the sunlit church sanctuary, which was exploding with joyous singing, while my hand rested protectively on my rounded belly, carrying our healthy seven-month son. Jesus had healed me from the inside out, with not only a new baby growing inside me, but also the grace of finding a midwife who, upon hearing my story, nodded her head and shared with me the similar story of her own miscarriage.

Somehow, among the midwives serving mostly Amish mothers in non-hospital settings, knowledge lived on that had eluded many in the medical community. The midwives told me it was typical for a third-month miscarriage to necessitate going through labor—sometimes labor that experienced mothers described as harder than a live birth. I could trust the care of my baby and myself to these women, who could recognize the reality of both my experience and my daughter, who had returned to God, her Creator. They understood that my labor for her made her that much more real to me. She didn’t creep away quietly.

Soon after losing my baby, I dreamed I was carrying an infant on my hip. She had curly blonde hair rising around her head and ruddy cheeks blooming on her tiny face. Her name was Grace. I awoke feeling very strongly she was the girl I’d lost, even though my baby’s sex was unknown and, based on my looks and my husband’s, I never expected to have a towhead baby with those features.

My son Eli grew to look like her twin, and his younger brother, Levi, also bears a strong resemblance. Their three faces make a beautiful tessellation of echoed features and expressions. As I’ve watched my two little blonde boys grow, I’ve become even more convinced that my dream was true and gave me a glimpse of my daughter, who blazed her way out of this world and seared me with the indelible memory of her existence.

Resources for couples coping with miscarriage

As Renee’s story illustrates, miscarriage can be a harrowing ordeal on many levels. But the good news is that caring people stand ready to help. Organizations such as Elizabeth Ministry (see the article in our January-February issue) can provide peer counselors, relevant information, and many resources, ranging from moral and spiritual support to burial vessels. If you or someone you know is suffering from a miscarriage, or if you have had a miscarriage and would like to ease the suffering of others now experiencing this loss, please visit www.ElizabethMinistry.com or call 920-766-9380.

Renee Lannan is a freelance writer from York, Pennsylvania. She and her husband, Nick, have two living children—Grace’s brothers, Eli and Levi. Renee enjoys spending her days with her sons, and as she works toward finishing a novel, she’s constantly reminded that the greatest stories she’ll ever be involved in are the lives of her children.