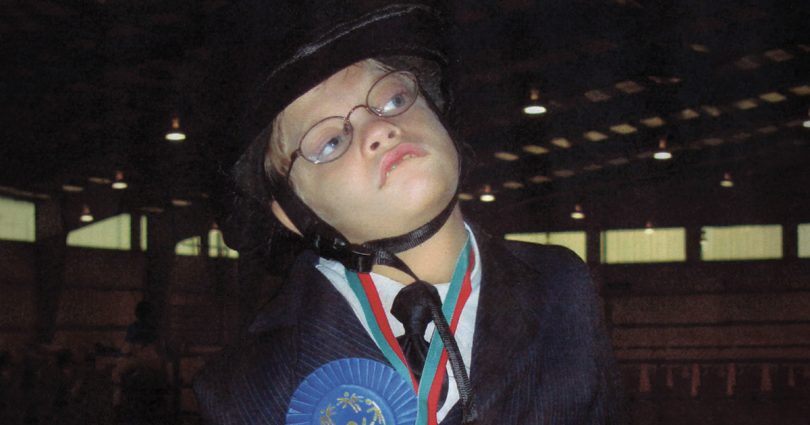 My husband and I walked into the hospital’s neonatal intensive care unit with only one thing on our minds: our 12-day-old son, Joseph. Nine days earlier, we’d been told that our dreams of watching our only child take his first steps, hearing him call us Mommy and Daddy, and cheering him when he hit a baseball would never be realized. He’d been diagnosed with Wolf-Hirschhorn syndrome, a disorder occurring worldwide in less than 2,800 births per year. It’s caused by part of the fourth chromosome breaking off, but since neither heredity nor environment had caused this, we wondered why we’d given birth to a child with an illness so rare that doctors described it as akin to being “struck by lightning.”

Reaching for the surgical robes lined up in assorted boxes at the neonatal unit’s doorway, we paid little attention to the signs displaying their sizes. We slipped them around our bodies like protective cocoons, just as we had done three times daily each day since his birth. We then navigated our way through a maze of more than 50 seriously ill babies, to each of whom were attached numerous plastic tubes larger than a baby’s tiny arms. The whooshing sounds of the breathing machines marked tiny breaths and were interrupted only by alarms warning that a moment of terror was near for another child of God.

After many days in this room, we had learned to walk—almost run, really—from these sounds, fearing one of them would mean the final moment for our son. I wiped the familiar moistness from my eyes and replayed in my mind the reports we had received from each of the 13 hospital specialists who had been called in for consultations.

Attempted destruction of life and hope

Without emotion, each had provided us with a long list of dire predictions for Joseph, such as “He will only eat through a tube and won’t be able to breathe on his own,” and “Oh yes, Mrs. Pierce, did I mention he probably will be blind, deaf, unable to communicate, and severely retarded?”

The geneticist had handed us information from a medical book that was 25 years out of date. Its description of the syndrome was accompanied by a picture of a wild-eyed, severely disfigured child. My obstetrician had encouraged us to institutionalize Joseph before we “bonded” with him. She was annoyed at any contact I had with him and believed he was an “inappropriate” child for us; she called him a “freak of nature.”

As I approached my son’s crib, I immediately checked all of his monitors, a skill I had learned in this world of fear. I turned toward my husband, Chris, and watched him stare at Joseph, his face full of pain, yet unwavering in the love he held for his son. The doctor’s words confused me as our little boy reached out his hand and wrapped it tightly around his father’s finger. I walked over to join them and placed my hands over theirs. At that moment, I felt we were united as a family and strengthened by love.

On this day, one of Joseph’s hospital doctors made an unscheduled visit. The hospital nursery, though crowded, was no deterrent for him. He walked straight over to us like someone on an important mission. Though my heart urged me to be silent, I confronted my fears. I released my grasp and approached the doctor.

“Excuse me, doctor,” I said loudly, fearing that my pounding heart would drown out the sound. “How would you compare Joseph’s condition with the other babies born with special needs?” I looked toward the other babies in the room, all holding on for their lives. I searched for something positive in the doctor’s demeanor, but my search was futile. He turned to me and said, matter-of-factly, “I’m glad you asked, Mrs. Pierce. I came to let you know that I have determined that Joseph’s condition is the next step up from death. You can choose to shut off his oxygen. As his parents, you have that right.”

I looked at him in shock. “Does that answer your question?” he said. My heart and mind burned in anger and horror. He’d essentially said, “Your child is a mistake that needs to be erased.” “Perhaps you should kill yourself for giving birth to a child like this” might have been a better choice of words for him.

All the fear and anger I’d stored up since Joseph’s birth surrounded me. In an attempt to hold back the flood of tears, my body trembled. I opened my mouth to speak, but no words came out. The scream I released inwardly only God could hear.

I turned toward Joseph, cooing and smiling, his hand still wrapped tightly around his father’s finger. Chris’ lips trembled at hearing the doctor and my heart ached for him. He gently released Joseph’s hand and walked up to the doctor. Looking directly into his eyes, Chris told him, “Murdering my son is not an option.”

His face turned pale as he walked back to Joseph and stared into the glass-encased crib. The doctor shrugged his shoulders and retreated to another couple huddled near a small crib at the far end of the room.

I felt as if all hope had left me, like air escaping from a balloon, and that everything that made up my life, heart, and soul was gone. I wanted to die, since I felt halfway dead already. It seemed my only son was going to experience a slow, painful death that we, his parents, had been chosen to witness.

Angels to the rescue

Though my vision was blurred, I noticed three nurses standing a few feet from Joseph’s crib. Had they been there all this while? Hands touched my shoulder as they surrounded us in a protective circle. Gently, they guided us to chairs a few feet away. Though we were unable to speak and barely aware of their arms around us, they spoke to us. I don’t recall their words, but I clearly recall that their arms felt comforting and secure. Their voices, like angels, touched us; it seemed they had gathered to put the pieces of our hearts back together.

As one pair of these loving arms came closer, I realized they held Joseph. I gathered him in my arms and was overwhelmed by a feeling of peace. Looking into his eyes, I saw a deep and compassionate love that was unmistakably familiar. “They’re God’s eyes,” I observed. The nurses smiled knowingly and walked away.

My husband looked at me, surprised by my words. Something inside of me knew those eyes held the promise of God’s encouragement and love for that day, and the many days and years after that. I remembered Christ’s assurance, which I had heard many times over the years: “I will be with you always, even to the end of the world” (Matthew 28:20). Joseph reached out his tiny hand and I held his fingers tightly. What man had attempted to destroy through words, God had saved with His love and grace.

We settled comfortably in our new lives, content at having been assigned the care of one of God’s most precious gifts. Today, 14 years later, we cherish our life with our son, from the joy of seeing him take his first steps to cheering him as he won his first gold medal in the equestrian division of the New Jersey Special Olympics in 2007. More recently Joseph has been a member of the Challengers, a baseball team for special-needs children that also participates in a winter bowling league. We were thrilled when Joseph received his first bowling trophy on January 29 of this year.

I look back on those days in the hospital and realize the doctors unknowingly gave us a valuable gift: the realization that a life without hope can be the next step up from death, but for the God of hope—Who fills us with all joy and peace through the power of the Holy Spirit (Romans 15:13).

Diane Pierce is a freelance writer and faith-driven pro-life advocate. She writes from Verona, New Jersey, where she lives with her husband, Christopher, and son, Joseph.

Hope and help for raising children with WHS

Many parents faced with raising a child diagnosed with Wolf-Hirschhorn syndrome are plagued with fear and hopelessness, because it can seem as if little help is available. But if you’re such a parent, you’ll soon discover that our children have many wonderful characteristics, including a sweet, loving, and gentle nature—and that God has blessed you with a wonderful gift!

I recommend these two websites, which allow you to communicate directly with other parents of WHS children: www.4p-SupportGroup.org and www.WolfHirschhorn.org.

Through these sites, you’ll find the information, inspiration, and compassion you’re seeking, as well as resources such as a WHS growth chart you can share with your child’s pediatrician.

The first parents I contacted (through these sites) had a 43-year-old son with WHS who had recently written a book on poetry. Another parent had a WHS child who rode a bike and learned to climb the backyard tree. My most hopeful moment was when an eight-year-old boy with WHS answered the phone and told me he was “busy watching Barney.”

Always remember there is hope and help. As He promises in His word (Hebrews 13:5), God will never leave you or forsake you!

Diane Pierce is a freelance writer and faith-driven pro-life advocate. She writes from Verona, New Jersey, where she lives with her husband, Christopher, and son, Joseph.