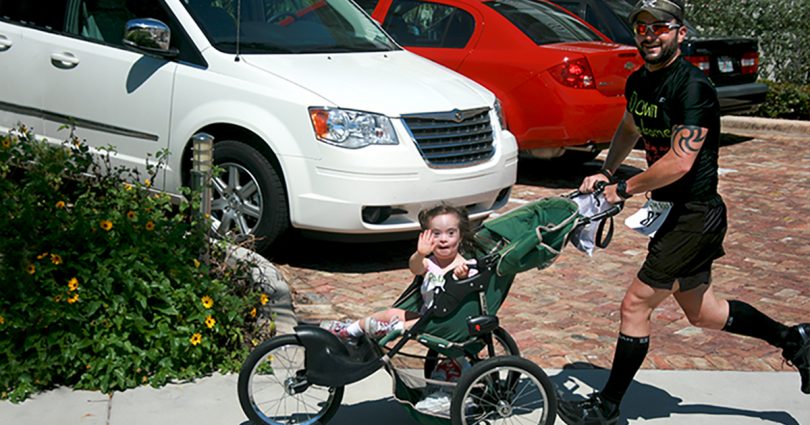 “You tell Cory I love him,” Heath said. There. He’d done it. What was so hard about that?

Heath White had just returned home from Sioux Falls, South Dakota, where he’d run a marathon with a new friend named Cory. Before saying goodbye, Cory had said, “I love you.” And all Heath had managed to get out in response was, “No, man; this is all aboutyou.” But as sincere as he had been—it had been all about Cory at that moment—it had bothered him all the way home. Why can Cory say, “I love you” and I can’t say it back? he wondered. So he’d done the next best thing. As soon as he got home, he fired up his computer and dispatched an e-mail to Pastor Keith Loy back in Sioux Falls, who had facilitated the tandem. “The next time you see Cory,” he wrote, “you tell him I love him.”

He meant it too. This is what he had learned from Cory: not only that he loved him and other kids like him, but also how to say so. It never failed. Whenever Heath got outside himself and gave to someone else, he ended up receiving even more. Funny. If he’d gotten his most vehement wish a few years ago, it would’ve never happened.

Heath’s résumé boasted a veritable constellation of successes. Seven years ago, they were his favorite topic of conversation. A top student and high school athlete, he’d attended college on scholarship and graduated with a 4.0 grade point average. He started law school, also on scholarship, but withdrew when he was accepted into the US Air Force pilot training program, where he graduated at the top of his class. While in the Air Force, he earned a master’s degree in aeronautical science (with another 4.0), flew 16 combat missions over Afghanistan, and logged 275 combat hours. After college, he had started running competitively, once finishing the Boston Marathon in under three hours. As for family life, he married his high school sweetheart, Jennifer, in 2000, and their first child, a healthy baby girl named Pepper, was born in 2005. His standard for life was perfection, and he intended to live up to it until his dying day.

Then came news that threatened to upset all his plans. Jennifer was pregnant again, and prenatal screening indicated this child might have Down syndrome, a chromosomal abnormality that would affect physical and mental development throughout life. Heath was beyond stunned. As an Air Force pilot, he had been screened for nearly every abnormality known to man. He was a winner with winner’s blood, and there was no room for a child with a disability in his plan for life. For other people, sure, if they incorporated a child with Down syndrome into their family, that was admirable and noble (he himself had even volunteered to help with the Special Olympics), but it wasn’t for him. And so Heath did everything he could to coerce Jennifer into terminating the pregnancy.

But she would have none of it, and Heath was left with the choice to either get on board or not. At first he prayed for a miracle, but when amniocentesis confirmed the diagnosis, his prayers degenerated into anger and resentment. Why me, Lord? Why, when I’ve lived right all my life, do I have to get a broken baby? It was his personalized version of why do bad things happen to good people?

Answers were not forthcoming. Still, disciplined stoic that he was, Heath attempted to cope with this wholly unwelcome diagnosis. And when some people told him a child with Down syndrome could be a joy, to put it politely, he called this baloney—except for one chance encounter that would leave a lasting mark. Heath was reading What to Expect When You’re Expecting a Baby with Down Syndrome in the flight crew lounge one day, when in walked a fellow Air Force Reserve captain whom Heath knew to be a big, “take no bull” man of conviction. “That’s awesome!” he said when he saw the book title. “I grew up with a guy that had Down syndrome. We were buddies. We fought all the time, palled around, and everything. Man, it’s going to work out. You’re gonna like that.” And then he just kept on walking, leaving behind an unexpected question for Heath to ponder. If this guy thinks this way about Down syndrome, why am I looking at it so differently? It was a good question

By the time Paisley was born, in March 2007, Heath had gone through all the five stages of grief that accompany a death: denial; anger—at pretty much everyone; bargaining—with no success; depression—mainly in the form of withdrawal; and finally, begrudging acceptance. But unlike a physical death, there was a sixth stage.

It blindsided him. Paisley was lying on her back as babies are wont to do, and Heath leaned down and tickled her. She laughed. She smiled. She tried to push him away, like any playful baby would. And his heart melted. She’s just like any other kid, he thought. Moreover, she’s my kid. All the anger and disappointment evaporated, never to return. Heath had never expected that the mourning would give way to joy, but in that simple epiphany moment, she stole his heart and he’s never recovered it.
She also began to redirect his thinking. All this time, he had been viewing Down syndrome as the enemy. As a military man, he was used to studying an enemy. But Down syndrome is not a disease to be fought and cured, like cancer. It was just a condition, a situation before him, waiting to be dealt with. And the more he studied and reflected, the more he began to view not Down syndrome, but ill-formed perceptions about Down syndrome, as an enemy to be confronted.

A few months later, guilt began to weigh on him: guilt for pressuring Jennifer to abort and guilt for not wanting this precious gift named Paisley in his life. So he decided to run a marathon with her, to let people see “just how beautiful she is.” There was an element of self-punishment that figured into it too, but in March 2008, just two weeks before Paisley’s first birthday, they ran their first marathon together in Little Rock, Arkansas, and for the full 26 miles, Heath didn’t feel anything but joy and pride. He actually found himself looking forward to rounding every corner and cresting every hill “just so everybody could see how beautiful she really is, to let everybody see that I was proud of her.” The sixth stage, joy, had overtaken and outshone all the darkness.

The paradox of love and joy

Heath and Paisley ran more races together, including 15 marathons. During their last race as a duo, just before Paisley’s fifth birthday, they passed their 321st mile together, a significant number because Down syndrome is the third replication of the 21st chromosome. By this time, Heath was so committed to identifying with, rather than distancing himself from, Down syndrome, that he’d had “Down syndrome” tattooed across his chest. He knew that when people looked at Paisley, they saw Down syndrome. Now, when they look at him, they see it too.

If they see him, that is. He’s fine if they don’t pay him any attention at all. He prefers to be the guy giving the limelight to someone else. The following year, he entered the Little Rock marathon again, but this time he pushed five adolescents and young adults from a nearby assisted living facility. The riders switched in and out of an advanced mobility stroller at prearranged relay points, and everyone got a medal. A few months after that, in September 2013, the members of Celebrate Community Church in Sioux Falls presented him with a customized racing stroller. And on the following day, he gave a joyride to three young people in the Sioux Falls marathon. The third rider that day, grinning from ear to ear as they crossed the finish line together, was Cory.

Like joy, love multiplies when you give it away

The power of one

Father Roman Braga (see the Fall 2013 issue of Salvo), who spent 11 years in prison for teaching religion and the Romanian language to high school students in Communist Romania, commented on a rising globalism, both in Europe and around the world, built on the same philosophical foundations as Communism. In Marxist thought, individuals don’t really matter. “Society” is what’s important. “In so-called globalism,” Father Braga said, “the individual will not have anything to do other than to be just like bricks in a building. I’m afraid of that.”

“No,” he continued, each individual is unique. God fashioned each one in His own way, and God never repeats Himself in creation. “Each [individual] is a universe. . . . That is the beauty of creation, of society, of the person.”

Becoming father to one individual—Paisley—ushered Heath into a whole new realm of living, partly because of her uncomplicated, sunny disposition. “She lives in the moment,” he told Celebrate Life Magazine, “whereas I live in the past and then the future, and most of the time, miss the present.” But there’s more to the joy of Paisley than just Paisley. That sweet, generous, loving nature of hers calls forth noble qualities in him that he never even knew were there until the universe named Paisley entered his world. That is the eternal, creative power of one individual.In an Easter message he was invited to deliver at Celebrate Community Church, Heath compared himself to Saul of Tarsus, who had persecuted Christians greatly before God intervened and made him a great leader. Except that, “in my case, it’s taken the daughter to resurrect the father. Before she was born, I only worried about how her disability reflected on me. But I can tell you now that there’s no better mirror in the world. She can find the light in the darkest places of my soul, and reflect them with a light and warmth that rivals the sun. . . . She’s become my light in the dark, leading me back home to the Promised Land. It’s an honor and privilege to be her father.”

To learn more about Down syndrome and supportive resources, check out the Jerome Lejeune Foundation, Prenatal Partners for Life,  and  the International Down Syndrome Coalition.

Organizations connecting the disabled and the athletic