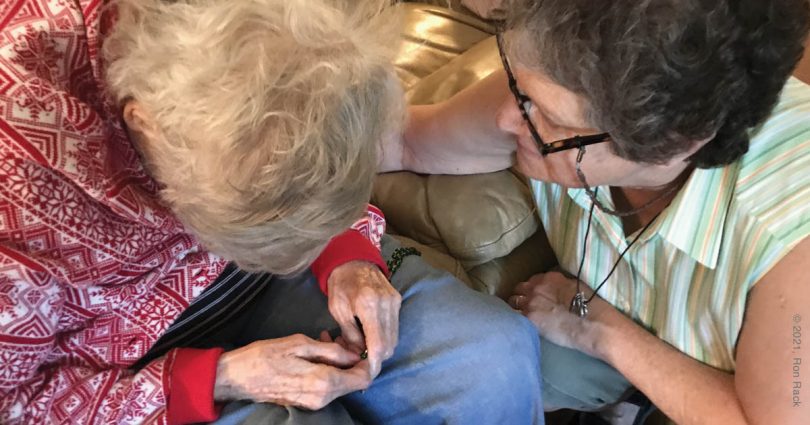 Occasionally, in my role as a caregiver for the elderly, I would do emergency fill-in shifts for people who called in sick. During one particular week, I met two “one-visit” clients who had amazing lessons to teach me. One of them was bedridden and seemed as beautiful and unique—and as frail—as a snowflake; the other was in the depths of dementia, to a point where the person “inside” could hardly communicate.

To know and to serve

My unique “snowflake” was an old man—bedridden, emaciated, and barely audible when he spoke. When I came in to take over from another caregiver, she showed me how to watch the TV with the headphones on, so I wouldn’t get bored. “WHAT?!” I thought to myself, “Forget that wasteful selfishness! I am here to be with this man, to serve him, and to know him as best I can in this short time that God has brought us together!”

Immediately after that young woman left, I wandered around the house looking for books. I selected two fairly good options, took them back to the bedroom, and read the titles to him. One was a compilation of classic literary passages, the other a biography of Mark Twain. I asked this sweet man if he would like me to read to him. His eyes lit up as he requested the book on Mark Twain. In his quiet, halting speech, he informed me that his middle name was Sawyer because he had grown up in northwestern Illinois, and his parents were big fans of Mark Twain. I had to wonder if any of his other caregivers knew this interesting tidbit.

I read to him until he decided that he needed to rest. As I walked away from the bed, he called out to me in a loud, clear voice: “You look like a librarian.” I turned back with a chuckle. Was this the same man I had been leaning over, with my ear right by his mouth, in the hopes of hearing enough words to catch his message?

Suddenly, this important thought had come to him, and he just belted it out. I managed to overcome my shock and replied that, while I was never a librarian, I did use the library a lot when I homeschooled my children. He looked at me with a serene smile and said these heartbreaking, yet oh, so flattering words: “My wife was a librarian.”

That was all it took! He reeled me in with those words. I was so honored that he had seen something in me that brought his wife to mind. I asked him to tell me more about her.

These are the moments when an elderly life shines bright, when recognition and memory come alive, and they reestablish their bearings by forming a connection with the one who has sought them out. You’re not going to be taught such skills while getting your nurse’s assistant training, and there’s no certification process for caring and compassion.

That’s too bad, really, because the medical stuff is just memorized caregiver tasks, and, while needed, I’m not absolutely sure that they are the most necessary requirements. Asking questions, truly listening, having sympathy and understanding, and recognizing that, as caregivers, we are entrusted with a great gift and the responsibility to accompany a soul near the end of his journey are all characteristics that form the mindset of a genuine caregiver. This kind of person will be able to reach into the depths of the suffering soul, find the buried nuggets of pure gold just waiting to shine forth, and ignite the heart.

My job is even more challenging when the souls I care for seem completely lost to this world. I’ve been with two clients whose dementia was so far advanced that they spent most of their time fretting and fidgeting and repeating the same actions over and over. They would struggle to talk, wander in search of they-did-not-know-what, and worry about responsibilities that were no longer theirs to undertake.

Finding the person inside

Later that same week, I encountered one such woman, my second “one-visit” client. Once again, I got creative in my efforts to “find” her. After spending the first 30 minutes following her in and out of rooms as she ambled aimlessly, I convinced her to lie on the couch. I found a pile of Reader’s Digest magazines and hoped that reading aloud to her would help calm her.

I proceeded to read a sentimental story about a grandmother and her granddaughter. When I finished, my client lay quietly for several seconds, the longest I’d seen her free from the nervous fidgeting since I’d arrived. Then she focused her eyes on my face and said something that told me I had “found” her. With a touch of awe in her voice, she said, “That was beautiful. Who are you?!” I went to the head of the couch and sat down on the floor, right next to her. I told her who I was and what a pleasure it was to meet her. She often felt lost, but having me there, reading and talking to her, was enough to calm her for a while and allow her to rest her tormented mind. It was a beautiful, awe-inspiring moment.

A witness to the faith

Even with these occasional successes, I still often felt incompetent with some of my clients. How does one enter into the daily lives of our elderly population with the right amount of charity, tenderness, mercy, and concern? How do we move among them with a sincere understanding of their dignity and worth? How can we love and revere what our culture often chooses to toss aside? The most heartbreaking thing is that the family members are often not very involved with the care of their parents. With these two once-in-a-lifetime clients, this was not the case. I felt blessed to meet the devoted daughters of both of these clients when my shift ended.

For me, these challenging care situations are where faith and hope must come into play—a time when I draw on a deep understanding of the gift and potential of all lives, no matter what limitations I might witness. I used to sit with another elderly man for hours doing word search puzzles, trying to help him in such a way that he thought he was actually finding the words. I would get so bored sometimes, but then I would think of Christ and what He suffered out of love for me. I was “suffering” on a comfy couch with a quiet old man who enjoyed every minute of our word search game.

I can only imagine that the eternal rewards of my sacrifices for these beloved and vulnerable souls will be immeasurable since I often incorporated several of the Spiritual and Corporal Works of Mercy into my daily work life.

As a caregiver, I was boldly Catholic in my work. I talked about my faith on a daily basis. A friend once asked me if I was afraid that I might get fired for that. “No,” I replied. “My clients love me! And if I visit someone just once, they’ll have their family call the office to see if I can be their regular caregiver. The office wants to clone me, not get rid of me!” That was when I coined the phrase “certified in compassion.”

I took my role so seriously that I helped lead one woman back to the faith after 40-plus years away from the Church. My parish priest visited her several times, heard her confession, began bringing her Holy Communion, and administered the sacrament of last rites after she suffered a debilitating stroke. This client became a dearly beloved friend of mine. When she died, her children agreed to have a funeral Mass and Catholic burial for her and asked me to read at the Mass!

I am so grateful for the time that I served and visited with the elderly in my daily work. I often find myself longing to have another caregiver position, but God has called me to a new place now—a new “job.” So I continue to serve the elderly by sharing these true stories, hoping that I will encourage others to give all they can to their own aging parents or to work as a caregiver with a licensed agency. It’s a job that takes all you’ve got, but one that has the potential to reciprocate with so much more than you could ever imagine!

Every day, I thank God for the gift of the elderly, who have so much wisdom, love, humor, insight, faith, and history to share with us and who long to offer their love to those who slow down enough to receive it—if only we choose to make them a priority in our lives and in our culture!

Charlene Rack grew up in the “heartland,” moved south to the big city of Cincinnati, and married a cute Catholic guy. She converted to the Catholic faith, had three daughters, and decided to homeschool. Along the way, she has influenced many young people via mission trips, youth groups, and trips to the March for Life—all carried out with her goofy sense of humor and her enthusiastic sense of adventure.