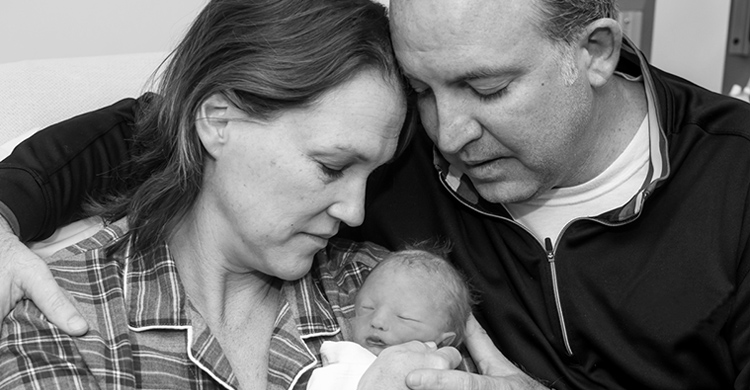 Whether on earth for 60 years or 60 seconds, every human being’s life has unique purpose

The young nurse at the appointment desk for high-risk ultrasounds held up five fingers and said to Mark and Ann DeLine, “Your son is extremely lucky to have parents like you. I can count on this hand how many people make the decision that you’ve made. Most parents leave and never come back because they have an abortion.”

However, the DeLines, from St. Louis, Missouri, didn’t feel like they were doing anything extraordinary. “He was our child, and we did what we should have done,” Ann says.

By choosing life for their son, John Paul, who had a genetic condition known as Trisomy 18, the DeLines received unexpected joy and what they call an “incredible gift.”

Ann and Mark were high school sweethearts; they met and fell in love their senior year of high school, and they married in their early 20s. Both from large Catholic families, they went on to have six healthy children. With their eldest son preparing for college and their youngest daughter going into second grade, Ann and Mark were entering a new phase in their life. They assumed they were done having children, so when Ann, 45, discovered on March 25, 2015 that she was pregnant again, the DeLines were in shock.

“Long ago the sippy cups and diapers had been put away,” says Mark. “The timing didn’t seem right; I had just started up a new company, and Ann was interviewing for jobs. We were open to God’s will, but we were also struggling.”

For Ann, that shock was mingled with a gut feeling that something was wrong with their preborn baby boy, so she had some blood work done.

Ann and the DeLine’s eldest son, Jack, were at college registration when she noticed several missed calls from her doctor. “I was in and out of meetings for my son, and there was no place for me to talk privately. I just knew that the news was bad.”

She quickly dialed Mark and asked him to call the doctor. “Later, I was walking through the parking lot when Mark called me back. He just burst into tears. I said, ‘Is everything okay?’ He said. ‘No, it’s not; he has Trisomy 18.’”

Trisomy 18, also referred to as Edwards’ syndrome, is a chromosomal disorder where the developing baby receives an extra chromosome 18, which can affect the heart and other major organs. Infants with Trisomy 18 are typically female; have a low birth-weight; a small, strawberry-shaped head; a small jaw and mouth; and deformities in feet and hands. The prognosis is bleak for babies with this diagnosis; only five to ten percent live past the first year after birth and most have an intellectual disability.

When Mark called Ann’s doctor, the doctor—who’s also a Catholic— went over the scenarios of possible outcomes for their son. He told Mark, “‘I think that you know one of the options, but I am not even going to go down the road with you guys.” The doctor knew that the DeLines were not going to abort.

Amazingly, throughout the whole pregnancy, all of Ann’s doctors and nurses were compassionate and supportive of her and Mark’s decision to give birth to their baby John Paul— named after Saint Pope John Paul the Great—affectionately dubbed “John Paul the Small.”

Mark and Ann were upfront with their six children, telling them that their baby brother probably wouldn’t make it.

“They all cried. I told them, ‘God picked our family for a reason, and we will get through it together as a family,’” Ann recalls.

Even though the prognosis was grim, they didn’t lose hope. Everyone in the family prayed for a miracle, “especially our 10-year-old daughter, Clare, who prayed every night,” Mark says.

Ann adds, “I told Clare we can pray for a miracle, but we cannot expect one. We can’t be mad at God; we have to pray to accept God’s will.”

Coping with the unknown

Every few weeks, Ann would have an ultrasound to monitor John Paul’s progress. “He kept passing hurdles. Typically, in babies with Trisomy 18, the major organs start to fade, but with John Paul, the ultrasounds showed that his heart kept getting stronger.”

However, the ultrasound tech, with great compassion, showed them that John Paul was missing his cerebellum, had clubfoot, Trisomy hands, and the typical strawberry-shaped head.

The power of prayer

During this time of so many unknowns, the DeLines felt wrapped in love and support from family, friends, and their parish and school communities. People they didn’t even know would come up to Mark and Ann to say they were praying for John Paul; hundreds of people wore green bracelets that said “John Paul” on one side and “Pray for Me” on the other. “This was the first time we felt the power of prayer. And those prayers really sustained us,” Ann says.   Another thing that bolstered them was a quote from St. Teresa of Avila, which became their family mantra: “Let nothing disturb you, let nothing frighten you. All things are passing. God never changes. He who has God wants nothing.”

God was allowing John Paul—a babe in the womb—to work a miracle for the DeLines. Mark and Ann both felt their oldest son, Jack, was falling away from the faith, but with Ann’s pregnancy, they witnessed spiritual and behavioral changes in Jack. “The fact that he saw Mark and I suffer and come through it with joy had a profound influence on him. He’s completely done a 180. I believe that it was John Paul because I continually prayed, ‘John Paul, you’ve got to help your big brother.’”

When Ann sent Jack a sonogram picture of John Paul, he hung it on his dorm room wall. Jack remembers how his brother changed him. “Each day, JP’s story and birth touched me in a new way. For instance, I received a letter from my aunt, and one of the things she said has stuck with me ever since: ‘John Paul’s life—however brief—is a blessing to us all.’ How true that became; his small ‘stone’ of existence has created such a massive ripple in the ‘pond’ of life. He took me off of a bad path . . . God knew what He was doing with John Paul’s life, and that is the same for every other life that comes into existence.”

On November 19, 2015, Ann was induced at 38 weeks. Mercy Hospital in St. Louis had been preparing for this day well in advance; they had a care team set up for Ann and John Paul, and they arranged an end suite with a large waiting room outside for friends and family. Ann was in labor for eight hours, and her children were doing everything they could to make her feel comfortable. “My oldest son was rubbing my feet, and my next oldest son was giving me a backrub, and one of my daughters was petting my head. We were all together, and it was a beautiful moment for our family.”

Through the pregnancy, the one thing they had desperately wanted was for John Paul to be born alive. “The nurses told me, ‘Dad, we’re not going to mince words. If he’s alive, we’re going to tell you he’s alive. If he’s not … we don’t want to give you false hope.’ At 11:30 pm John Paul came out, and they put him right on Ann’s chest. They had him hooked up to the oxygen, and they were trying to get his heart going. Nurse Maggie said, ‘Dad, we don’t have a heartbeat.’”

Crying as he remembers the day, Mark explains, “The moment was beautiful too because when I saw his face, I thought that he looked like our other kids; he was perfect.”

Ann recalls, “John Paul was very peaceful and warm to the touch. It just seemed like he was sleeping.”

Mark and Ann felt God was watching over their children since they have no fearful memories. “Throughout the whole pregnancy, we kept saying, ‘We hope that he will be born alive so that we can hold him.’ God knew better than we did,” Ann says.

Mark adds, “If he died after we brought him home, it would have been traumatic for them.”

Their priest, Fr. Richard Stoltz, had been waiting with the children outside Ann’s room when the nurse informed him and the family that John Paul had not made it. When he entered the room, he saw a sight that touched him deeply. “There he was—in his little knitted cap—so peaceful and beautiful, held by Ann,” Fr. Stoltz told Celebrate Life.

“The way Mark handled the whole event was deeply moving. After we had prayed for John Paul and the family, Mark had all the kids hold John Paul. Mark kept saying, ‘Isn’t he beautiful.’ It was heartbreaking, and at the same time, wonderful and beautiful. It was one of the moving experiences of my priesthood.”

John Paul the Small brought the community together

John Paul stayed with them the whole 24 hours that Ann was in the hospital; family and friends were welcomed to hold him. “We weren’t sure initially if we wanted to see people the next day. Then we thought, ‘Our friends and family have been with us on this journey, and we want them to meet John Paul.’”

Over 1000 people attended John Paul the Small’s funeral at St. Alban Roe Parish in Wildwood, Missouri. In the evening, after the funeral lunch, their friends planned a huge party at the DeLine’s home. “They planned this party; meals were brought to us for weeks, gifts, presents, and gift cards. It was truly unbelievable what people did for us.”

At the funeral lunch, Ann’s sister, Barb, summed up the experience. With emotion, she said, “Look at this joy, this incredible show of support! You would have never known it if you hadn’t had the suffering.”

The story of John Paul the Small is a beautiful witness to the value of every human being’s life and to the truth that it is not for us to decide who lives and who dies for any reason, including adverse prenatal diagnoses.

American Life League’s youth department, Life Defenders, has created a video related to this topic. It offers a positive message addressing the value of every human being’s life and thus the importance of defending the same. Go to LifeDefender.org/Resources to watch their video called “Who Makes the Cut.”