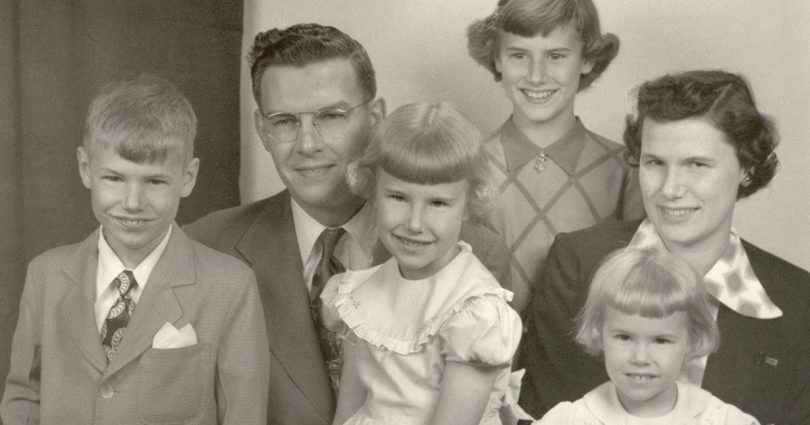 But if a widow has children or grandchildren, these should learn first of all to put their religion into practice by caring for their own family and so repaying their parents and grandparents, for this is pleasing to God. —1 Timothy 5:4

I’m the youngest of four children and the only one who has never married. Of course, my sweet parents continued to care for their “baby” until well into their 80s. I lived only a few blocks away, so they got tapped to open doors for workers, chase my escaped cats, fix toilets and doorbells, pick up prescriptions—you name it. My mom brought me meals when I was under the weather, and my dad rode with me to the veterinarian emergency room in the middle of the night whenever one of my cats was sick. He didn’t want me “out on the street alone” at that hour—though I was over 50 at the time! They were there for me in every kind of crisis. Did they spoil me? You bet!

Very gradually, almost imperceptibly at first, things began to skew. My mom, who suffered for many years from congestive heart failure, needed an occasional ride to the emergency room because my dad didn’t feel able. He was plagued with an extremely rare condition called Meige syndrome, which causes severe eye and jaw spasms. As he aged, that and his advancing macular degeneration kept him from driving at night. I became the designated driver for our family get-togethers and their extracurricular church functions. I also became a regular at their church picnics and ice-cream socials. It was fun and I enjoyed being with them. In spite of their physical challenges, they were good company and real troopers.

The occasional rides began to turn into frequent trips—to doctors’ appointments, the grocery store, the pharmacy, K-Mart. Then there came a day when my dad confessed (when my mom wasn’t present) that they weren’t eating proper meals anymore. That evening became the first of many when I mass-produced homemade meals for them. I also began to take them weekly to McDonald’s—one of their favorite spots.

A few years ago, in springtime, I received a panicky call from my mom, saying that my dad should go to the ER. His entire body was spasming. The ER doctors were at a loss as to what was causing all of his old symptoms to return and with such a vengeance. Only after a few severe falling incidents did we learn that their retirement community’s house doctor had replaced his crucial medications with something that wasn’t working. This damaged his central nervous system and his mind so much that even using the proper medications again didn’t solve his problems. He began to slip into the murky world of dementia.

My dad’s life changed abruptly at that point, and so did mine. Dad had been a mechanical engineer. He could make or fix absolutely anything, and invented many ingenious machines. He even became proficient on the computer at age 85. It was devastating to watch such a brilliant man begin losing his grip on reality. He was moved to a nursing environment several miles from their home. Having been married nearly 70 years and “joined at the hip” since they were teenagers, Mom wished to see Dad often. We went twice daily, frequently picking up fast food between trips and stops at my house to feed my many pets, including a number of rescued animals. Besides working full-time, I now spent every spare moment “being there” for my parents.

When Mom fell and broke her hip that summer, she handed her checkbook to me and asked me to take care of the bills from then on. Mom was placed in a different nursing facility than Dad, for physical therapy, which meant daily trips to two places on my lunch hour and after work. I laundered their clothes at my house, and decorated their rooms with familiar and cherished things from their home. My goal was to keep them comfortable, maintain their dignity, and keep them looking as great as they did when caring for themselves. All of the things my dear parents had done for me were being returned to them with sometimes overly busy hands, but a loving heart.

Just before Christmas of that year, my beloved mother passed away, having never fully recovered from the infections that ensued after her hip surgery. As difficult as it was to lose her, I felt relieved that the excruciating pain she had endured for many months had ended. I believe she was celebrating Christmas with her Lord, whole and happy. At Mom’s funeral, Dad could only grasp reality for a moment. After that, he would, at times, suddenly realize she was gone. Then the empty, painful place in his heart would open up all over again and the tears would flow.

Dad died a few weeks before Easter of the following year, in his sleep, probably from a broken heart. My parents had enjoyed an enduring relationship, marked by total commitment and unconditional love. After an unceremonious separation by the nursing facility for several months, I believe they were once again together—this time for an eternity.

The day after Dad passed away, I received the frightening news that I had cancer. How fervently I wished that the “shoes” could again be shifted to the feet of Mom and Dad—that they could once more be there to care for me and listen to my fears! It consoled me to imagine they were now among my guardian angels, helping to watch over me. I could feel God’s strength and my parents’ love holding me up through the ensuing days and years. I’m presently a five-year cancer survivor and am so thankful for God’s mercy in my life.

The Christmas holidays are coming up again, and during those days I’ll gratefully remember the gift of having had two caring, God-fearing parents. I’m also constantly mindful that I’m never alone and, thankfully, not in charge of any of the “shoes.” My heavenly Father faithfully watches over my every footstep. In one of his books, Catholic author and counselor Roy Petitfils put it like this: “Our hope is in the name of the Lord—who wears running shoes!”

Kristin L. Ellens, freelance writer and retired church administrator, writes from Grand Rapids, Michigan. She enjoys penning inspirational articles about the people and pets in her life. She has a special place in her heart for the elderly, as well as her rescued cats and birds. For many years, she took great pleasure in bringing pets to visit elderly residents in a local care facility.