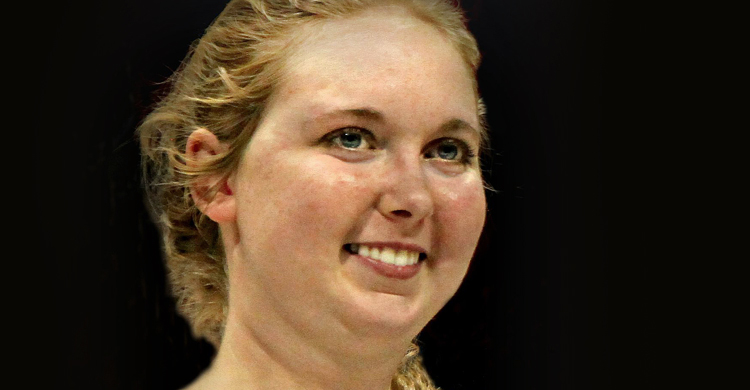 Lauren Hill’s inspiring story touched the hearts of countless people around the world this year. The 19-year-old’s battle with a rare form of inoperable pediatric brain cancer thrust her into the spotlight as she became a voice to raise awareness of a devastating disease, Diffuse Intrinsic Pontine Glioma (DIPG).

The result was a tremendous outpouring of financial support that continued in the weeks and months after Lauren passed in April 2015. The Cure Starts Now, a Cincinnati-based organization founded by the parents of a child who died from the same cancer, received more than $1.7 million in donations in Lauren’s name.

Just as important was Lauren’s witness to the sanctity of every human being’s life. Her willingness to refuse to give up when others might have retreated from the pain and suffering, her openness to devoting her time and energy to raise money to help others afflicted with the same dreadful disease, her humanity and gentle nature, and her understanding of God’s will in her life left a lasting impact on the world.

Every life has purpose

Corey Potts, her pastor, spoke at a public memorial service after her death. “God has created every life with a purpose and a reason and he has put spiritual DNA inside of us. I think Lauren is a perfect example of that,” he said. “Through tragedy, through darkness, through hard times, God’s light always prevails. Though she was here only a short time, the innumerable lives that have been touched through her light, love, and testimony, we’ll never know.”

As a senior at Lawrenceburg High School, located outside of Cincinnati in Southeastern Indiana, Lauren was a popular student and a standout basketball player. She had committed to play in college at Mount St. Joseph University. Life was good. But then she began to notice something not quite right with her balance and coordination. At first, doctors couldn’t figure it out. The diagnosis came in November 2013. It was cancer, specifically DIPG.

Lauren soldiered through her last year of high school, enduring radiation and chemotherapy, hoping and praying for the best while trying to beat the odds. Though her basketball skills were diminished by her illness, Mount St. Joseph honored its offer to Lauren to play basketball at the NCAA Division III school.

Dan Benjamin, the women’s basketball coach at Mount St. Joseph, had recruited Lauren before the cancer struck, but he wasn’t supposed to be back as coach for Lauren’s first season. Several twists of fate, though, led to the school rehiring him. Even before Lauren arrived for the fall semester, he had become her biggest advocate and fan.

Benjamin understood her passion for basketball and knew from the moment Lauren stepped onto campus that her goal was to play in a college game, despite her declining health. With the Mount’s season opener scheduled for late November and faced with a prognosis that she might not make it to Christmas, Benjamin asked the NCAA to move up the team’s first game against Hiram College to early November.

“People forget this part, but she always wanted to play in a college basketball game,” Benjamin said. “For us, that was our motivation. That was our ability to make her wish come true, her dream come true. Like she said, to hear the shoes squeak on the floor and to hear the crowd going crazy. She had a never-give-up attitude. She said I truly live day to day. She said if people would do that, they would find more happiness in their lives.”

A local television station ran a lengthy feature on Lauren’s battle. The story quickly went viral. So many people wanted to attend the early November game to support her cause that the game was moved to Xavier University’s 10,000-seat Cintas Center and nationally televised.

After airing on the Cincinnati station, Lauren’s story spread like wildfire. National media wanted to interview her. She captivated and inspired celebrities, politicians, professional athletes, and entertainers.“

She was thankful for all the generosity and support and prayers,” said Lisa Hill, Lauren’s mother who was by her side during the 18-month ordeal. “When it came down to it, for Lauren, her true purpose was to give a voice to DIPG and hopefully find a cure and raise money. Everything else that happened around her was extra stuff. It was the mission that was most important.”

Not only were the families of children with DIPG appreciative, but Lauren affected others fighting personal battles. Her pastor, Corey Potts, received an email from an individual who had experienced suicidal thoughts for 30 years and was contemplating ending his life. “But once he heard the intimate details about Lauren and the positives that came from dealing with such a sad, horrible situation and heard how Lauren chose to fight and not give up, he was inspired by Lauren not to give up,” Potts said. “That’s just one person out of the blue.”

Persevering to the end

Despite Lauren’s physical limitations, including dizziness and weakness on her right side, she started the opening game and made a left-handed layup that brought the fans in the sold-out arena to their feet and some to tears: Her dream had been realized. Lauren called it the greatest day of her life—and what a moment to remember for her family.

Lauren was so determined to press on that she defied the odds and played in three more games before the end of the year. Her appearances on the floor were brief (she scored 10 points in the four games), but each was an inspirational display of determination and fortitude.

The young woman with the big heart made it past Christmas and New Year’s. She could no longer play basketball, but managed to make appearances at fundraisers and received an honorary degree from Mount St. Joseph. She did as many local and national interviews as she could endure. The last national interview came a few weeks before her death. Lauren’s ability to summon the strength for the interviews amazed even her mom.

“When it came time for cameras, I’ve watched her a couple of times where she didn’t want to do the interview, but when the camera came on,” Lisa said, “it was like, where did that all even come from? And then when the camera would go off, she would say I don’t feel good. But whenever she had to do her work it was done. And it was done beautifully. I just don’t know where she got it from. She took the purpose and ran with it.”

It wasn’t easy some days to deal with the pain, uncertainty, and unknown. At one point during her journey, Lauren turned to God when she was struggling to make sense of it all and asked for help in understanding why this was happening to her. “God just spoke to her and said this is her calling. Be the voice for those who don’t have a voice; bring awareness to this. She really wrapped herself around that purpose and that calling that God had for her,” Pastor Potts said. “And I think that’s what gives strength—knowing to do what God has called you to do and that’s where she got her strength. She knew that there were other people and other children and other families counting on her. Man, she was a trooper and she took that to the fullest.”

There was something about Lauren that makes people gravitate toward her cause. “Even if you never met Lauren, she affected so many lives and I think that’s because the grace that she showed everyone,” Potts said. “Even when the spotlight came to her, it wasn’t about her. There was just this humbleness and meekness there. And I think that, because of that humbleness and meekness, God really raised her up and allowed Him to be seen through her.”

Lauren embraced the cross of her illness and the suffering that went along with it. She chose not to retreat, but to show the dignity of every human being’s life—born and preborn, sick and healthy, young and elderly. “Lauren died not only with dignity, but with integrity,” Potts said.

After Lauren passed, her mother Lisa went to work for The Cure Starts Now. It helps her continue Lauren’s mission and stay connected with other families battling DIPG. “You have a choice—do you want to get in and help do something about it or sit at home and sulk over a loss all the time and just feel helpless,” Lisa said of her new job and her efforts to keep Lauren’s legacy alive. “But I don’t have to feel helpless anymore. This gives me an avenue to feel like I’m helping. I still have hope, but I hope I’m out of a job in five years.”

That would be an answer to everyone’s prayers, especially Lauren’s. A cure is too late to save Lauren’s life, but Potts believes Lauren already has received her reward. “I know without a doubt that Lauren Hill has heard, ‘Well done, my good and faithful servant.’”

One year after Lauren’s first college game, Xavier will play host to the Lauren Hill Tipoff Classic. The game, held on Saturday, November 14, will be a nationally televised doubleheader featuring a rematch between Mount St. Joseph and Hiram, following Xavier taking on Evansville. Ticket proceeds will go to The Cure Starts Now.

Doug Bean is a writer/editor who resides in Westerville, Ohio with his wife, Janice, and their six children. For more information, visit  thecurestartsnow.org, layup4lauren.org, twitter.com/layup4lauren, Facebook.com/layup4lauren