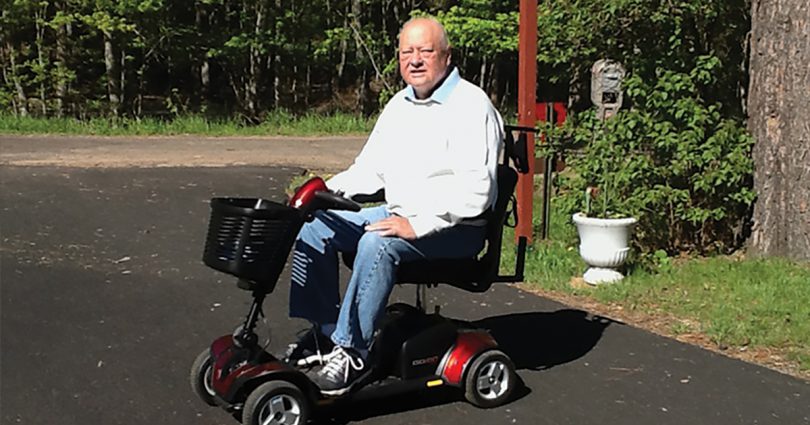 Choosing to die (as opposed to accepting the inevitability of death) cheats oneself of the closing moments God has planned for one’s life. Euthanasia or suicide allows for no second chance to savor a bit more of life or better prepare for death. There is no change of mind possible after giving in to despair by ending one’s life. What those who want to die prematurely really need is the love, prayers, and support of family, friends, doctors, and caregivers.

Larry’s story is about one man’s journey through terminal illness—a journey on which he discovered that every day, even when it includes suffering, is a gift. His story illustrates that terminal illness, the last stage of earthly life, can be a time when the bonds of humanity are strengthened, and a person learns what it means to be loved more than he ever could have imagined. This is a story of hope, written by Larry in September 2013. –Julie Grimstad

I was born and raised in a small city in the northernmost part of Wisconsin. My life was uneventful until I fell head over heels in love with a beautiful girl named Diane. The best move I ever made was to ask her to marry me, and we’ve been happily married for 43 years. We have three wonderful children and eight beautiful grandchildren.

In February 2011, because of a bowel problem, I went to my Veterans Administration doctor for a check-up and I underwent an MRI procedure. My doctor diagnosed a bowel infection and prescribed some pills to treat it.

Two days later, on Valentine’s Day, Diane and I were having lunch at a restaurant when my cell phone rang. My doctor needed to see me immediately. As we sat down in his office, he told me I had stage IV pancreatic cancer, and it was inoperable. I knew that was one of the worst types, but I didn’t know just how bad. Diane and I had planned a trip to Florida. The deposit had been paid and plane tickets purchased. We asked if we could still go, as it was only a couple of weeks away. The doctor responded, “You will turn yellow, and be too sick and weak. And you have only a month to live. “

I fainted. Diane told me later that my eyes rolled up into my head, I slumped over, and Code Blue was called. I woke up on a gurney. Later that day, I called my kids, relatives, and close friends to give them the bad news. Not fun!

The doctor told us to drive to the VA medical clinic in Minneapolis, 160 miles away, and go directly to the emergency room and check in. The next day, we did what we were told, but the doctor’s instructions were all wrong. I needed a referral, but he hadn’t sent one. I had to go to the oncology department, but he hadn’t notified it in advance. I was supposed to have my medical records, but he didn’t send them. Our long ride was a waste of time. We got my name into the system, but that could have been done by phone.

The first phase of my treatment was a consultation with the head of the oncology department. She explained that, because the cancer was advanced, it was best to attack it aggressively with a relatively new type of chemotherapy. I called it “the new kid on the block. “ After the first treatment, I walked outside into a cold, misty rain. It felt like a thousand freezing pin pricks on my face.

For my chemo treatments, we would drive to Minneapolis on Monday and stay in a hotel so we could make it to the VA clinic the next morning. After the staff gave me blood tests to determine if I could have chemo that day, they made up the batch. I’d get my treatment and then a battery-operated pump for the second batch. The pump was attached to me for 46 hours. We would drive home and return two days later to have the pump removed. Nobody at the VA clinic back home could do this; hence, the 320-mile round trip twice a week, every other week.

When I turned 65, Medicare took over the payment of my medical bills, which meant I could be treated closer to home. That made the next year a lot easier: a round trip of only 60 miles and not having to fight traffic.

A most unusual gift

My new doctor was a nice young man. We had a great doctor-patient relationship. After several months and several kinds of chemo, a CAT scan showed that my pancreas had calcified, which was unusual, and my lungs weren’t getting any worse. The doctor pulled his chair very close to mine, looked me in the eye, and told me I had been given a gift. He had no idea why I was still alive or why the cancer wasn’t going anywhere.

That was about nine months ago. Since then, that doctor left for another position. Even though I’m getting weaker, I’m still here. My current doctor did the latest CAT scan and found that the cancer in my lungs had started to grow. He told me there is no other chemo treatment we can use.

On June 24, 2013, my doctor told me I had three to six months left. The good news is that my hair has grown back and I’m not beaten down by the chemo now.

That’s all of the gloom and doom in my story. There are many good things to tell.

I’ve had lots of fun times golfing. I even made it to the championship flight (the final round of competition) in my senior league for the last two years. We’ve also enjoyed socializing with friends. I’m a retired police officer, and an old friend I worked with said he wanted to get some of the guys together for drinks and reminiscing. I’ve been retired for 20 years, so it was overwhelming to see so many people there. We’ve discovered how much people care about Diane and me. Our friends and family have been there for us at every step of the way, doing anything they can to help—including praying.

I also found out I married not only a beautiful girl, but my best friend, soul mate, caregiver, and confidante, as well as a saint. Diane has stuck with me through every mile and has put up with more bad days than anyone should have to endure. One of the most touching moments came one day when we were driving home from the Minneapolis clinic. The news had been bad, and we were both really down. Neither of us spoke a word for quite a while. The radio was playing and the song “Stand by Me “came on. Diane was driving, as usual. We both reached out and held hands. Though we’d heard that song a thousand times before, it never had so much meaning. We just held hands and cried.

Dick, a good friend, had a memorial golf bench made in my name. It now sits in front of the golf course clubhouse. Dick said he got tired of carrying that bench in his truck for two years, so he just dropped it off. I’m probably the only living person to sit on his own memorial bench!

I have lived a full and happy life. And it’s not over yet. I am truly blessed!

Postscript: Larry Larson died on Saturday, January 4, 2014, almost three years after being told he had one month to live. His wife, Diane, reports that he slipped into a coma and died the way he wanted to: at home, peacefully. My husband and I went to Larry’s funeral Mass at the Cathedral of Christ the King in Superior, Wisconsin, and my husband was a pallbearer. Those in attendance almost filled up the cathedral. He was a well-loved man with many friends, and it was a beautiful funeral. May he rest in peace. —Julie Grimstad

Author Biography: Larry Larson was born and raised in Superior, Wisconsin. After two years in the US Army, Larry served as a police officer for the City of Superior until retiring with a disability at age 47. The mutual devotion of Larry and his wife, Diane, was an inspiration to their family and friends.

Julie Grimstad serves as president of the Healthcare Advocacy and Leadership Organization. A nationally known speaker and writer, she addresses many aspects of medical decision-making and patient advocacy. She has served as a volunteer patient advocate since 1985.