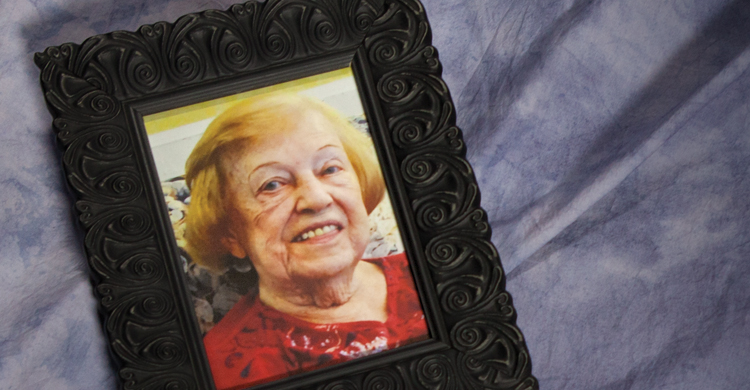 Earlier this year, we received a letter from one of American Life League’s supporters. She wrote concerning the untimely death of her 81-year-old husband and the tragic circumstances surrounding it. This is one of the saddest letters I’ve ever received, and we’ve reprinted it below because it illustrates a current, very serious problem in our health care system. Names and places have been removed for privacy.

My husband had a stroke and heart attack 12 years ago. He had treatment and went to work at a golf course. Years went by.

In October 2012, his doctor thought he should have hospice. I don’t know why. The doctor hadn’t seen my husband in about seven and a half months.

I was promised my husband would have no drugs, as he had no pain. He hadn’t even had an 81-illigram aspirin in the many years I took care of him. They (the hospice nurse) promised “no drugs” if I put him in respite care to give me a break. Like a fool, I believed them.

After the shot, fluid and chunks of I don’t know what came out of his mouth so fast my daughter could hardly control it. She had to catch it in the sheet and coverlet. They advertise love, comfort, and compassion—LIES!

For no reason, they tried a catheter on him. They had no permission for anything they did. He must have screamed!

When he arrived [at the hospice] on November 20, he visited and joked with our pastor and his wife. I fed him Fruit Loops [cereal]. He was used to having six bacon [strips], two eggs, cereal, a donut, fruit, and tea. I cried when I went on November 21. His eyes were cracked and rolling around; he could not talk, move, or [do] anything. A ZOMBIE!

They [give] thousands of drugs to people—LOAD them with drugs. My husband had five in six and a half hours. The nurse also reported in her notes she gave him several doses of morphine (plus the ones she recorded). The doctor later said to me, “You give him permission to die when you bring him to the local hospice.”

If I had read this letter five years ago, I would have been tempted to dismiss it. I would have rationalized that the woman who lost her husband was in a very emotional state, and probably not remembering all of the conversations that occurred or permissions she gave. Certainly, I would have thought, medical professionals would not have acted as callously toward life as she described.

But not anymore. Our family has been through so much with the medical community, regarding its treatment of my mother-in-law and aunt, that I don’t doubt this woman’s story for a second.

My mother-in-law, Anne Bizub, was born on November 12, 1913. For the past 10 years, she had been living in a wonderful care facility in New Jersey. Over the years, she moved from the assisted living wing to the Alzheimer’s wing, and then to the skilled nursing wing. Through it all, she was a happy woman who had kind words for all who cared for her, and she was loved by the staff.

In January 2013, she developed breathing problems and was transported to the local emergency room. They inserted an intravenous tube (IV) and ran tests to determine the problem. The family was gathering in the emergency room when the doctor came and told them, “She is 99 years old and has had a good life. We are going to let that IV run out, and that’s all we are going to do.”

The family was outraged and said, “You have to treat her!” The doctor declined and the family went to the hospital administration to get a new doctor assigned. That doctor treated her aggressively, and within two weeks, she was back at the nursing facility, once again enjoying life. Mom got along well, and was excited when the whole family got together and celebrated her 100th birthday in November at a fantastic restaurant.

Shortly after the birthday party, Mom was having trouble breathing again, which was caused by fluid in the sacs around her lungs. She was transported to a different local hospital this time. Not a single doctor in that hospital would perform the procedure to drain the fluid. At the family’s insistence, a doctor at another hospital said he would do it. She was transferred there, the fluid was drained, and she returned to the skilled nursing facility.

A few months later, Mom had additional medical problems and went to the hospital. “This is it,” the family was told. “Make sure you have the funeral arrangements made.” For a full month, they prodded and poked, and came up with diagnosis after diagnosis. They kept telling us to let her go, but Mom kept on living.

Finally (as happened to the woman whose letter I’ve shared), we were told we should provide her with “comfort care.” We were promised all sorts of things if we did so. She would be treated for her ailments, and not given any morphine or other drugs to knock her out. They made it sound wonderful and compassionate. We had a family physician meet with the hospital doctors, and he said, “If they do what they say they’re going to do, the comfort care looks like the best option.” So, we decided to give her comfort care.

My wife’s sister went to the hospital and told the head nurse that the family had agreed on comfort care. “Fine,” said the nurse. “I’ll get the morphine drip started right away.” WHAT?! “What are you talking about?” asked my sister-in-law. The nurse replied, “In comfort care, we stop monitoring vital signs and give the patient morphine.” The family immediately canceled permission for comfort care and insisted that Mom be treated.

Guess what? Within a week, the hospital decided Mom was well enough to return to the skilled nursing facility. The staff at the facility were overjoyed. They loved our mom and were so happy to have her back. They said they would take great care of her.

And so they did. Mom lived at the facility happily for another six months. Every day, they got her out of bed and into her wheelchair. She participated in group events and really enjoyed the sing-alongs when they sang songs of her youth. On her last day, she was still participating in such events. Two family members had visited with her and even took her outside for a little while. She went to bed as usual, and God called her home while she was sleeping—a wonderful end to a wonderful life.

But the entire family had to fight, tooth and nail, for over two years to stop those who would have denied her months of enjoyment, visits with family, and the death God had planned for her.

The purpose of this article is to warn you about what’s out there. At American Life League, we hear about developments like this all the time. The world has changed. As Governor Richard Lamm of Colorado told the terminally ill elderly 30 years ago, “You’ve got a duty to die and get out of the way.” 1

But what’s an “old” person? Ezekiel Emanuel, chief author of the Patient Protection and Affordable Care Act (Obamacare)—the law that now drives all health care services in the United States—recently wrote in the Atlantic that he hopes to die at 75, arguing that death at this age would be best for everyone.2

Emanuel does not advocate euthanasia or suicide, but he does fight for the idea that life beyond 75 is not worth living.

This mentality is beginning to permeate the medical community. During our trials with Mom, a family physician told us, “You have to understand that the doctors consider your mom a medical miracle. The pervasive view in the medical community is that people are not supposed to live that long.”

It’s clear that physicians are being “trained” to secure the family’s cooperation in making life-ending decisions. They all seem to use the same “lingo.” When our aunt, Catherine Rodriguez, was admitted to a hospital at age 93, one of the physician on duty’s first requests was that the family sign a “do not resuscitate” order. His arguments were those we had heard before:

And the coup de grace was this:

There are, of course, logical answers to all of these points, but when the hospital physician threw that last one at me, I replied, “No problem. If you tell the family my aunt is brain-dead and we have to disconnect the ventilator, I’ll just tell them to go away for seven days. If hasn’t begun to decompose, then she is not dead, because you, even with all of your machines, cannot keep a dead body intact for more than a week.” He thought about that for a minute and replied, “It might be possible to keep it going for 10 days.”

The lesson in all of this is, unfortunately, don’t think of the medical community as a friend. There are some really good and caring medical personnel, but the community as a whole has lost its way. It simply has no understanding of God, or the meaning or merit of suffering.

Prepare yourself and your family for a battle. Know the facts. Do research. Role-play. Know that if you are going to give your loved ones every moment God wants them to have, you’re going to have to fight for it.

2Ezekiel J. Emanuel, “Why I Hope to Die at 75: An argument that society and families—and you—will be better off if nature takes its course swiftly and promptly,” The Atlantic, October 2014, TheAtlantic.com.