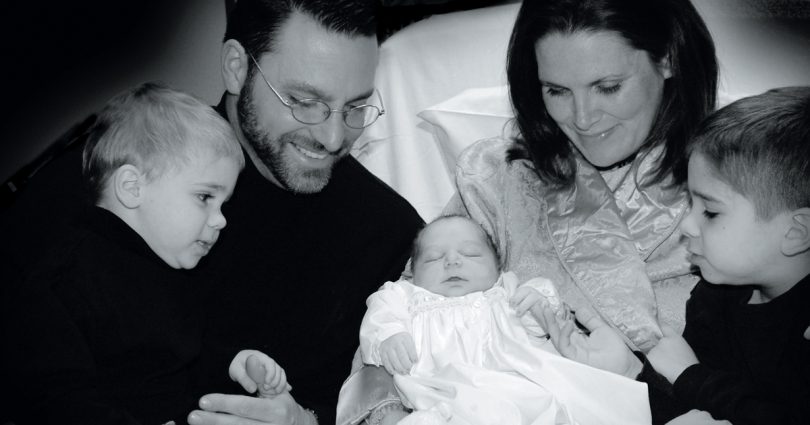 My wife Jennifer and I have two healthy, active boys: Jacob, six, and John Paul, three. In July 2006, when we learned that we had another child, we were excited and thought we knew exactly what to expect. However, at 13 weeks our obstetrician had difficulty detecting the baby’s heartbeat, so we had a sonogram. When Jennifer saw our gorgeous, tiny baby kicking away, all seemed fine.

As the day for our routine sonogram approached at 20 weeks, we considered our appointment as a fun family outing for our sons. Just in case something went wrong beforehand, we hadn’t told our boys about the baby yet. Then, on the morning of this particular sonogram, we happily told them that we’d have a new baby in the family and we were going to see the baby’s image.

Jennifer had been told that the odds of something being wrong were less than one in 1,400—so we were confident that everything would be fine. Yet after just a few moments of the perinatologist’s observations, our excitement faded because she looked frantic. Consequently, we felt numb.

Our baby was missing kidneys—they had never developed and, subsequently, the baby wasn’t generating amniotic fluid. A lack of amniotic fluid also prevents a baby’s lungs from developing properly. All this meant that our baby wouldn’t be able to survive after birth.

While nothing could save our baby, we wanted to know about the baby’s condition and what to expect during pregnancy, so we decided to have a chorionic villus sampling. It’s similar to an amniocentesis, but done when there is an absence of amniotic fluid. It took three weeks for us to receive the results and they came back as “normal,” which meant that a chromosomal abnormality could not be detected. Our baby’s missing kidneys were best explained as a developmental fluke. It’s called bilateral renal agenesis, also known as Potter’s Syndrome. We also found out that this baby was our very first little girl.

Considering our very special daughter, whom we needed to guard and care for during her short life, we readily agreed to name her “Gianna Marie.”

The first part of her name was chosen in honor of Saint Gianna Beretta Molla; a wife, mother and doctor from Italy who served God by treating children, the elderly and the poor. While Dr. Molla was expecting her fourth child, she was diagnosed with an ovarian cyst and urged by her own doctor to have an abortion. However, she rejected both the abortion and cancer treatment in order to save her unborn child. On April 28, 1962—just one week after the birth of her daughter—Dr. Molla died, but her baby grew up to be a pro-life physician. So her life story strengthened and inspired our faith.

We chose the name Marie to honor the Blessed Mother, who is the best model for accepting the heartbreak of a child’s suffering and death.

The dignity of life

Babies with our Gianna’s condition usually develop to term because they have everything they need in utero. But because she had no chance of surviving more than two hours after birth, doctors immediately offered to “terminate the pregnancy.” We were told that anywhere from 50 to 80 percent of parents in our situation choose abortion.

We are Catholics. Therefore, we uphold the principle that all human lives—from conception until natural death—deserve to be treated with dignity and we rejected abortion. Inducing labor early also would’ve been a form of euthanizing our baby. If we were told that one of our sons wasn’t expected to live beyond the next five months, we certainly wouldn’t wish to end his life early.

Emotionally, however, we desperately wanted everything about this experience—including the pregnancy—to be over, but we also knew that we couldn’t become moral relativists simply to ease our emotional pain. Sometimes the right thing is the hardest to do, although with time and healing, we learn that it brings many blessings. We knew we would carry our baby girl to term and do our best to celebrate every moment of her precious life, even though the vast majority of it would be in the womb.

Part of the family

This was the most trying challenge we ever faced and so our prayer was for God’s will to be carried out through Gianna’s precious life. We prayed that we would joyfully and gratefully carry the cross of our baby’s death. After all, Jennifer and I believe our children are gifts to us on loan from God and that it is our job to nurture and inspire them, to protect their eternal souls.

I wanted to make sure Gianna would be exposed to some of the experiences that make our family special. When some friends wanted to hold a prayer vigil for Gianna, I requested Saint Joseph’s Chapel in Saint Benedict’s Abbey in Atchison, Kansas. It is one of my favorite places because Saint Joseph is the patron of fathers. On the night of the vigil, our friends packed the chapel and the support was overwhelming.

Before we knew Gianna’s diagnosis, we had visited my parents who still live in my childhood home and we visited the cemetery where my grandparents are buried. Thus, I am glad that she was near the places and people who I love.

When I explained to Jacob that Gianna would not come home with us after she was born, he asked, “Can I hug and kiss Mommy’s tummy like I did when John Paul was in there?”

We talked to Gianna often. Because it’s important for little girls to know that their fathers are strong, every day I told Gianna that I loved her. Then I added, “Your father is a very handsome man.”

Jennifer sent an e-mail prayer request to friends, family and members of our parish mothers’ group. We asked primarily for prayers, but also for guidance from anyone who had experienced infant loss. Thanks to the internet, our prayer request literally went all over the world.

As a result, we received many cards and packages. During the pregnancy, we received the relics of five saints from people we didn’t know. We also heard from many loving couples who had experienced infant loss and they offered consolation and hope.

Among the blessings we that received, the members of over 20 religious communities prayed for us and three archbishops offered Mass for Gianna.

Many of our friends made personal sacrifices.

The most profound sacrifice we knew about came from our friend Megan, who, after hearing of our situation, learned that her preborn baby of 20 weeks no longer had a heartbeat. Megan offered up her four-day labor and the difficult delivery of her stillborn son, Collin, for Gianna and our family. Today, the bodies of Collin and Gianna rest next to one another at the Infant of Prague section of Resurrection Cemetery in Lenexa, Kansas.

Christians of many denominations joined us in prayer. We asked people to join us in praying a novena. To our surprise, two Buddhists and several inmates at Leavenworth State Prison prayed it. At a parish event, Jennifer introduced herself to another pregnant woman who smiled and said, “Oh, I know you! We’re praying the novena for you!” Knowing that so many people were praying for us—from cloistered Carmelite nuns to prisoners to strangers in my parish community— gave us amazing peace and strength.

Return to the Father On Jacob’s sixth birthday, March 5, 2007, Jennifer delivered Baby Gianna. As we saw our beautiful daughter for the first time, she opened her eyes and looked toward us.

Our dear friend, Father Brendan Rolling was outside the delivery room, so he rushed in and baptized her. While reading the Rite of Baptism, his voice cracked. We then brought in our boys to meet their baby sister. I spent the majority of Gianna’s life holding her as I knelt on the floor so Jacob and John Paul could shower her with kisses and even tickle her toes. I have never been more proud of my sons.

How appropriate, I thought, for me to be on my knees as I held a pure and innocent eternal soul, soon to be a saint. She and our sons are the culmination of the love between me and my wife. After 30 minutes, she peacefully drifted from the loving arms of her earthly father to her heavenly Father. Jennifer and I received Christ in the Holy Eucharist at nearly the same time Christ was receiving Gianna’s soul.

Later we learned that the name “Gianna” means “God’s gracious gift.” And indeed she was a very special blessing because, despite our suffering, we feel blessed and honored to be her parents.

My heart still aches because I long to hold her. At Mass, I become especially emotional because I know that the angels and saints are present at the consecration of the Eucharist and, for now, this is as near to her as I can be.

I always believed that it’s my job to direct my children to heaven. Now our family is blessed with a heavenly advocate. Daily I ask for her guidance to prepare her brothers for their vocations—and we are so grateful to still have our little saint in our midst.

John Schmidt writes from Olathe, Kansas. All photos in this article were taken by Angela Boquin, owner of Bella Photography.She volunteers for Now I Lay Me Down to Sleep.