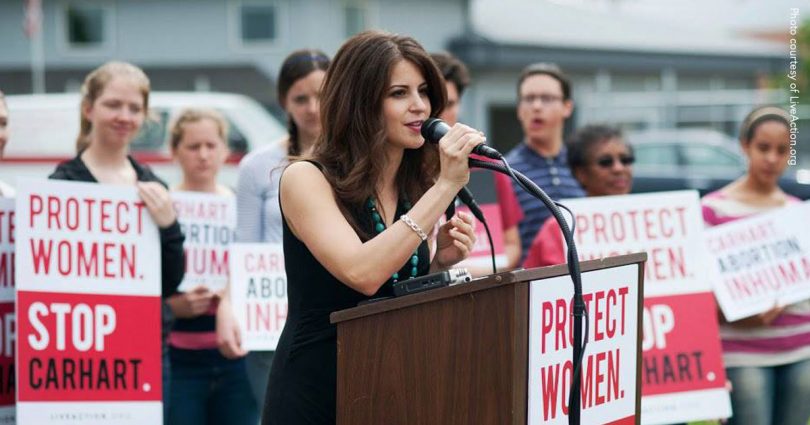 According to his employees’ testimony, this Philadelphia abortionist delivered hundreds of late-term babies and then killed them by snipping their spinal cords. But months before Gosnell’s trial ended in May with his conviction on three counts of first-degree murder in the brutal deaths of newborn children outside the womb, involuntary manslaughter of a patient, violation of Pennsylvania’s 24-week abortion limit, and hundreds of other crimes, Live Action sent investigators into late-term abortion facilities. This was the organization’s eighth undercover investigation of the abortion industry.

The investigators’ interactions with abortionists and their staffs reveal blatant disregard not only for preborn babies, but also for the 2002 Born-Alive Infants Protection Act (a federal law extending full legal protection to all babies born alive, including the right to receive lifesaving medical care), a late-term abortion ban, and women’s health and safety, as well as blatant lies about prenatal development (including the ability to feel pain), abortion’s physical and emotional risks, and patient deaths.

The most horrifying evidence revealed by Inhuman starkly exposes the callousness exhibited at abortion mills toward society’s most vulnerable members: preborn and newborn babies. The coldness and brutality is difficult for a rational person to comprehend: babies born alive and left to die (“They will not resuscitate,” as one abortion worker put it), or actively killed and dismembered; barbaric references to tools and procedures used to rip babies from their mother’ wombs; women warned to avoid hospital emergency rooms because doctors there might actually try to save the baby; women advised to stay in their hotel rooms to deliver a baby into the toilet; and nationally notorious abortionist LeRoy Carhart referring to the womb as a “Crock-Pot” where a baby is left to die after receiving a lethal injection.

“In one sense, it’s [still] surprising to see the inhumanity, the gruesomeness of abortion and the abortion industry, and to see that day after day after day. On the other hand, these are activities that have been going on for years,” Lila commented in her recent interview with Celebrate Life Magazine. She’s the 25-year-old dynamo who started Live Action as a teenager (see Celebrate Life, March-April 2010). A graduate of the University of California (Los Angeles), Lila is now devoted, full-time, to exposing the abortion industry through the Internet, using Live Action’s website and social media websites such as Facebook, YouTube, Twitter, and Flickr.

“For most people who don’t know a lot about this, it is terribly shocking,” Lila observed. “The more and more you see this activity, [you realize] it’s business as usual … [revealed by] what’s happening in Texas and the different stories that are emerging all over the country.”

According to three former employees, Houston abortionist Douglas Karpen has routinely violated Texas’ 24-week abortion limit and frequently killed babies born alive (see OperationRescue.org and ldi.org). The employees testified, on camera, that Karpen has killed born-alive babies by several gruesome methods, including twisting off their heads. He’s currently under investigation by state and local officials, who have nonetheless allowed him to keep his two facilities open.

Long before the Gosnell trial became news (when mainstream media could no longer ignore the story), Lila was well aware of babies sometimes surviving late-term abortions and late-term abortionists who are publicly proud of their grisly work. So, Live Action sent investigators, who were 23 to 26 weeks pregnant, to audit abortion mills in several areas of the country. The intent was to expose what happens to babies who survive failed abortions, how abortion workers describe the abortion process, and how they treat clients.

“The late-term abortion industry is riddled with lawless activity and abuse,” Lila said regarding Live Action’s findings.”First-term abortions are just as brutal and horrific; they’re just not as regulated. But [for] later-term abortions, there is some regulation—at least some intention of regulation. There’s actual lawbreaking going on. And some of the striking examples of that are . . . children that survive abortion attempts [who] are killed. They’re struggling for their lives in these abortion clinics.”

Workers described, in dehumanizing terms, the infanticide perpetuated at the abortion mills. In Bronx, New York, a staffer told Live Action’s investigator that an infant born alive is placed in a jar with a solution that prevents the baby from breathing. In Washington, DC, abortionist Cesare Santangelo described severing the baby’s umbilical cord at delivery, to cut off oxygen—effectively strangling the child—while emphasizing that his staff would not intervene to save the life of a child born alive.

Even more gruesome are the machinations of Carhart, who boasted to Live Action’s investigator of performing “20-some thousand” abortions after 24 weeks, and nonchalantly detailed his chilling procedure for administering a fatal injection to the baby in the womb (to make the child “mushy” and easier to remove) and extracting body parts in pieces.

“Whether it’s putting a baby who survives an abortion into a jar with toxic solution to drown, or joking about using a pickax or drills [as Carhart did] to rip a baby out of its mother’s womb . . ., every time, it’s a new shock and . . . a new heartbreak,” Lila said.

Breaking through the media blackout

In light of Live Action’s work, the Gosnell case, and testimony from Karpen’s former employees about the brutality of late-term abortion procedures, are people outside the pro-life movement starting to take notice? Lila believes that, as these facilities receive more exposure, there’s an increasing recognition in the media, the public domain, and legislatures that many viable babies are being destroyed by abortion.

“Despite the extreme pro-abortion mentality of our president, and his radical pro-abortion initiatives and policies, we have seen amazing progress in the pro-life movement,” Rose asserted. “I think there’s a paradigm shift in our country and even in the media, [to] where abortion is no longer looked at in terms of empowerment of women.”

The Inhuman series gained additional traction from the attention focused on the Gosnell trial. Lila has appeared on the Fox News Channel and CNN. USA Today, the Washington Post, the Washington Times, and the New York Post have published stories on the Inhuman investigation, but they’ve stopped short of probing deeper.

“There’s a media blackout right now on many of the abortionists that Live Action investigated,” Lila reported. “There needs to be more media coverage of all of these abortionists committing these atrocities in our own neighborhoods, . . . because we don’t have commonsense laws that protect these children.” A notable exception to the blackout occurred on May 15, when the Houston Chronicle ran a front-page story on the investigation of Karpen.

Despite the mainstream media’s pro-abortion bias, Lila is greatly encouraged by her organization’s impact on young people through social media. Live Action currently has almost 600,000 “likes” on its Facebook page (almost half are from teenagers), and it has doubled the number of its Twitter followers in the past year.

“It’s been so powerful. We’ve seen an amazing response from a large variety of people from different backgrounds,” she reported. “Some say, ‘I was pro-choice, but I can’t call myself that anymore, and thank you for exposing this.’ . . . It’s really overwhelming to see how many people care and agree that this is an incredible injustice that needs to be stopped.”

Unjust in every way

There’s no denying what goes on inside the walls of these houses of horrors. The evidence has been clearly documented by Live Action and others, and includes testimony straight from the mouths of the abortionists themselves. And yet many late-term abortionists continue to get away with what is legally murder (even under America’s permissive abortion laws) and horrendous abuse of their clients.

Lila and her colleagues regularly hear from victims, who privately share their pain. One woman described a botched abortion at Santangelo’s facility. The baby wasn’t removed entirely from the womb, which resulted in severe health complications—apart from the tragic consequences for her baby. “She has little recourse because Santangelo is being allowed to operate without insurance,” Lila explained. “This is yet another aspect of how this unregulated, abusive industry is betraying women as well as children. These women can’t turn back time, but they want to see a way for some justice to be done.”

Hundreds of millions of dollars in federal funding for Planned Parenthood and other anti-life enterprises remains a huge obstacle to shutting down the abortion industry. “It’s an injustice to force Americans to be funding this abortion chain. That taxpayer funding needs to be immediately cut,” Lila declared.

Lila is pressing for more legislative and legal action aimed at the abortion industry, by attending rallies across the country, lobbying lawmakers, and making public statements and media appearances, with the ultimate goal of banning all abortions.

Because of the efforts of Live Action, American Life League, and other pro-life organizations, America is slowly discovering that there are more Gosnells out there. And abortion mills have good reasons to be running scared.

As a result of the Gosnell case, state oversight of Pennsylvania’s abortion businesses, suspended for 17 years, has resumed, and after a similarly long lapse, those of Illinois were recently inspected, resulting in the immediate closure of two, for health and safety violations.

Very recently, four abortion mills were shut down and three abortionists’ licenses were suspended inMaryland, after a patient died and regulators found substandard conditions, and Nebraska’s attorney general petitioned the state health department to revoke the license of Carhart’s only licensed nurse for what he described as “incompetent or negligent conduct.” The Gosnell case, Live Action’s investigations, and the allegations about Karpen have spurred pro-lifers elsewhere to push for more state regulation and inspection as well.

“I think that the Gosnell trial and the exposés that Live Action has been putting out on abortionists [send] a shock wave through the abortion industry because, first of all, they see that there’s another abortionist out there being tried for murder, for killing babies of the same size and gestation that they kill every day legally, and the lines are blurred—what is licit and what is not,” Lila said. She also noted that Live Action’s earlier exposés apparently resulted in Planned Parenthood retraining some 11,000 employees nationwide.

“And second of all, I think abortionists realize that when people discover what they’re up to, and even women who are in these desperate situations really discover what happens in an abortion and what’s happening to their child, then they lose all support. So, I think it puts abortionists in the light of the truth. . . . I think the day is coming soon when these activities will be illegal.”

Until that day comes, Live Action will continue its exposure campaign, with the hope of defunding, delicensing, and shutting down abortionists and their facilities, while educating the public, and changing hearts and minds. And no matter how “clean” an abortion business might become as a result of government regulation, it doesn’t sanitize the act of abortion itself, Lila emphasized.

“The conditions in these clinics are quite sickening and horrific, but the most sickening and most horrific thing is that they’re violently killing, tearing apart, poisoning, and inducing premature labor for children, many of whom could survive outside the womb,” she said. “The main goal in all of this is to protect that child, so we can extend a real reverence in our country or a real support of human dignity, at every stage of life. That is going to be the solution to the problem of Gosnell.”