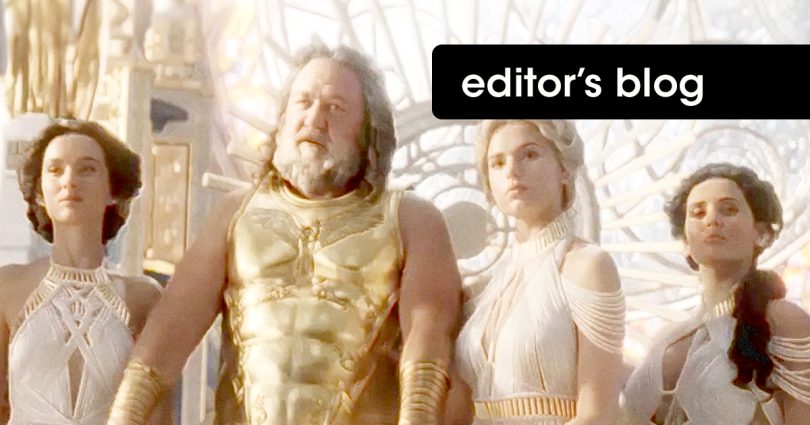 My sons and I saw Thor: Love and Thunder this past weekend. In a nutshell, the premise is that a father (Gorr) loses his daughter when a famine and drought befall his land. He becomes angry with the gods and goes to visit one, where he happens upon a special sword that gives him the ability to kill gods.

And Gorr does just that. He allows his anger and resentment to drive him as he embarks on a war against the gods. He is so filled with rage that all he can do is seek revenge.

This is evident in this scene, and though the movie is just fiction, it does tell us something about how the Greek, Roman, and Norse gods were portrayed. They didn’t create out of love. They created for sport. They treated people like playthings for their enjoyment. And they stirred up problems just to see what would happen next.

Contrast these false gods with our one true God. Like Gorr, we may not understand why bad things happen or why things don’t go the way we want them to, but we can be sure of one thing that Gorr could never understand: God loves us so completely, so selflessly, and so endlessly that it’s hard to even fathom. He created us out of love so that we could know Him and eventually spend eternity with Him. And even after mankind betrayed Him, He still wanted us with Him. To prove this, He sent His Son to die so that we could have a chance at salvation.

That agape love is what is missing with the false gods of the movie and the false gods we allow to take over our lives today. True, not many people these days believe in a god of the sun, the moon, the sea, and so forth, but many of us do have false gods in our lives. These false gods might be material possessions, wealth, drugs, alcohol, or anything else that we put before God. In particular, we have seen recently that even abortion has become a false god. One look at the policies of “woke” corporations or “feminist” websites will show just how much these places worship the right to kill a baby.

For instance, nearly everything on the front page of Ms. Magazine’s site reflects their indignation regarding the Dobbs case. They simply cannot imagine a world without abortion and seem to want to do everything they can to promote it. And they will stop at nothing—including inciting anger and propagating lies—to sway people to their side. It’s beyond disturbing to read the unending litany of articles stating the opinions of women who truly want killing a baby to be a “right.”

It’s no wonder the culture of death is so pervasive today.

That’s why we can and must take action to change our culture to one of life. If we don’t educate our children and our friends, if we don’t stand up for our faith, and if we don’t use our time, talents, and treasures to help others—including moms and babies—then we are allowing the false gods of this world to devour us, and we are no better than the gods of mythology who play at the game of life without ever actually caring about the players.

Putting other things before God, idolizing abortion and other threats to life, and failing to respect all human beings—born and preborn—are the main reasons we see such spiritual corruption in our society today.

If we want to create a culture of life, we must rid the world of these false gods, put aside any anger and resentment, learn to put others first, and love as Christ loves.

Most importantly, we must remember that the problem with false gods is that you can love them, but they don’t love you back.