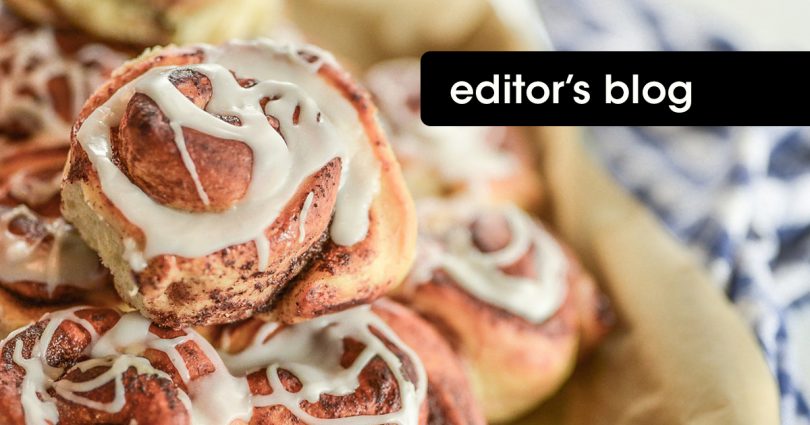 My maternal grandmother was a sweet, petite woman who had the kindest disposition and who radiated both joy and a quiet strength. Even though she was tiny, her hugs made you feel like you were wrapped in a warm, protective blanket.

A devoted wife and mother, she raised seven children, kept a comfortable house, and filled it with love. Though she didn’t live close to where I grew up, we would see her two to three times a year, and she was always so thrilled to see us. The effort she went to in order to make us feel welcome was greatly felt the minute we walked in the door. Stepping into her home, we were greeted by the most heavenly of scents from something baking in the oven. Whether it was homemade cinnamon rolls, homemade donuts, or homemade nut or poppy seed rolls—or all of the above!—we knew these delicious confections were made out of pure love.

She died the summer before I began college, but not before spending years suffering with Alzheimer’s.

So it is natural that I thought about her when I read the article about a proposed implant that would “automatically trigger a lethal drug at the onset of dementia.”

And while this implant has been neither developed nor approved, just the mere fact that people would have the coldhearted audacity to propose such a heinous creation should send chills down our spines.

According to Margaret Battin and Brent M. Kious, the scientists who proposed the implant:

We think it important to take this seemingly radical idea seriously. We may not currently have the technology to realize it, and perhaps not the social conditions that would allow it to be used without abuse. It may even be hard to conceive of this idea. . . . But we think it is an important idea nevertheless: it makes us see what is so problematic about how we respond to dementia in our current world, forcing some to suffer a future they dread and burdening others with acting for them.

Of course no one wants to suffer from Alzheimer’s or dementia. Just as no one wants to get any of the other myriad diseases people suffer from. But in that last line we see the truth of why something like this implant is conceived: “burdening others with acting for them.”

We live in a world where people are not cherished for who they are as human beings, but only for what they can do. The sick and elderly are taught that caring for them in their time of need is a burden—financially, emotionally, or physically. They are made to feel guilty for needing assistance and care.

Thankfully, she raised amazing children who took loving care of her. Because of proximity, my mom’s youngest sister and her husband bore the brunt of the caretaking, but sometimes my grandmother would stay at our house for a couple weeks at a time so that my aunt and uncle could have a break.

It was during those times that I learned a great deal about compassion. My grandmother forgot things. She became easily agitated. She thought our home was hers and we were invading her space or taking her things. She saw people who weren’t there. And she didn’t always know who we were.

It was difficult to see her that way. I missed the woman who knitted beautiful afghans, baked treats, and laughed at the silly things I would do. But she never stopped being my grandmother. And, after years of her taking care of others, it was now our turn to care for her. In so doing, we were given an immense gift. We got to act in the person of Christ. We got to see her as He saw her. To Him, she was precious. She was loved. She mattered. He didn’t see Alzheimer’s; He just saw Ann.

Caring for her, even though I was just in high school, helped shape me as a person. It made me stronger. It taught me to love greater and deeper. It taught me to be compassionate and patient. It taught me that the world was bigger than just me or my teenage concerns. It helped me grow not just as a person but as a daughter of Christ. And the example my parents set instilled in me the determination to one day take care of them, should they need me to.

The gift my family gave to my grandmother by taking care of her lovingly will bear fruit for many years to come, for we saw her as a child of God who needed our love and compassion, not as a burden who should be killed.

Today, we live in a world too quick to get rid of people some consider as “burdens.” We often hear people say, “I wouldn’t want to live that way!” or “Put me out of my misery.” But that’s not how God wants us to view the life He has given us.

Life is always a precious gift to be cherished, nurtured, and cultivated. And we all have a role to play in teaching love, understanding, and kindness.

So, when we see stories about implants that can kill or about states passing laws allowing physician-assisted suicide, let us raise our voices in love and proclaim proudly that every person—regardless of age or ability—has inherent value and dignity. Let us learn to speak out in defense of those who do not have voices or who cannot speak for themselves. Let us not allow a culture focused on selfishness and death to become that thief who lurks in the darkness hoping to steal what is precious from us.

Our dignity—and the dignity of our fellow human beings—is a gift from God. We did nothing to earn it. It is a gift freely given to us. In turn, we must share that gift and protect it always.