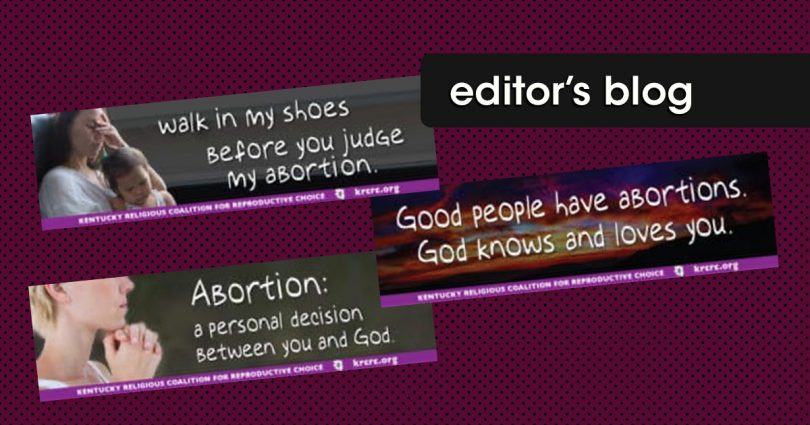 Nothing is more disturbing than a group that distorts and perverts the word of God.

A pro-abortion group called the Kentucky Religious Coalition for Reproductive Choice has begun a statewide billboard campaign aimed at convincing people that abortion is not a sin.

According to the billboard campaign’s spokesperson: “For too long, America’s religious right has dominated the discussion about abortion, shaming women and telling them that abortion is a sin. [We want] Kentuckians to hear a different truth: Abortion is a very personal decision, between you and God.”

A different truth? I think she means one they made up to make people “feel” better. Truths do not change. The fact that every abortion kills a tiny child is a truth—and a sin—whether she likes it or not.

Furthermore, “Thou shall not kill” is not an opinion. It is a command. And it applies to born and preborn human beings whether people choose to believe it or not.

The spokesperson continues: “For many Kentuckians who have had an abortion—a medical procedure one in four American women will have had by age 45—this may be the first time they’ve ever heard anything other than that God would disapprove. Our message is of a loving God who understands, and who offers free will. . . . Those choosing abortion deserve compassion and love, not shame and harassment.”

Campaigns like this serve only to confuse people and obfuscate the truth. Every abortion kills a living human being.

Yes, God is merciful. God loves all His children no matter what. And God has given us free will.

But that free will does not mean that we have carte blanche to harm ourselves or others without having to face consequences. I can walk into a store and walk out with my favorite merchandise hidden in my coat. I can exact revenge on someone who has hurt me by destroying his property or hurting him. I can vandalize a store because I’m angry. I have the free will to do all of these things. But just because I can do them doesn’t mean they’re right, good, or moral. And it doesn’t mean there won’t be penalties or punishments.

This moral relativism that we see in our world today debases our faith and defiles God’s teachings. In Proverbs 6:16-19, we read that there are “six things the Lord hates.” Included among them are “a lying tongue, hands that shed innocent blood, a heart that plots wicked schemes . . . the false witness who utters lies, and the one who sows discord among kindred.”

This is not supposition. This is truth! And the billboard campaign hits all of these things! It lies. It encourages the shedding of innocent blood. It’s run by those who plot wicked schemes—schemes that lead people to death rather than to life. It is brought about by false witnesses—those who do not understand the heart of God. And it sows discord; it helps create a society of people who believe that killing an innocent child is a “choice.”

As pro-lifers, we work tirelessly every day to teach the truth behind the humanity of the preborn baby. We help women choose life for their babies and teach that killing their baby will likely come with regret. It may not be this year or next. It may be 10 years from now. Indeed, as abortion counselor Carrie Bond recently stated: “The majority of women we see are usually 15, 20, 30, 40 years removed.”

What may seem like the “easy way” out now is likely to fill a woman with heartache later.

We know that God is compassionate. We know He forgives. But we must seek His forgiveness.

Wouldn’t it be better to not have to seek the forgiveness in the first place?

Abortionists take a woman’s money, kill her baby, and send her home alone.

Pro-lifers charge nothing. We educate. We give materials to assist. We help her understand the value of her child. We help her improve her life. And we ensure that, as long as she wants help, she is never alone.

That is true compassion. That is the love of Christ. And that is the truth that pro-abortionists don’t want women to hear.