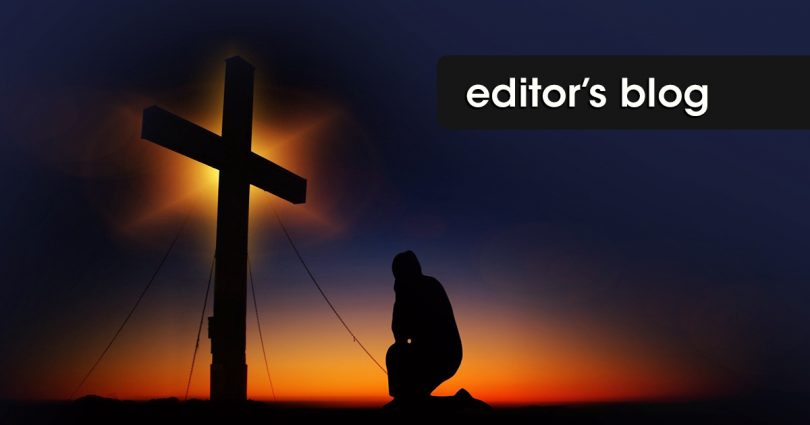 Like thousands of people, I’ve been singing the music from Hamilton for weeks.

One of the most poignant scenes in the musical is during the song “It’s Quiet Uptown” where we see the grief of Eliza and Alexander after losing their son. The two are also still reeling from the exposure of Alexander’s infidelity. Toward the end of the song, Eliza takes Alexander’s hand, and the chorus sings “Forgiveness. Can you imagine?” Alexander weeps, and we understand that he’s feeling not just the pain of losing his son, but also the relief of Eliza’s forgiveness.

This scene has caused so many people to weep with Alexander—and there’s a reason for that! Everyone craves forgiveness, and everyone knows how incredible it feels to be forgiven. “Can you imagine?” Yes, we can! For that is the way we feel—or should feel—after the sacrament of reconciliation. In the confessional, we admit all our sins, and we apologize to God for them. We promise to try to amend our lives. God takes our hand, and He forgives us.

The burdens we carried before going into the confessional are lifted. We literally have a blank slate! Though we may sometimes feel like we are unworthy of forgiveness, God teaches us that that is never true. When we reach out to Him in sorrow, and when we humble ourselves and admit we fell short of following His commandments, He opens His arms and offers us His forgiveness.

Forgiveness is one of the most amazing gifts God has given us. Yet, forgiveness is a gift we struggle to bestow on others.

It can be extremely difficult to forgive, especially if the person wronged us in such a way that we feel the hurt every day. But holding on to that hurt and anger destroys us. With each bitter thought and each moment spent on withholding forgiveness, we lose a piece of ourselves.

The Bible stresses the importance of forgiveness. Matthew 18:21-22 teaches: “Then Peter approaching asked him, ‘Lord, if my brother sins against me, how often must I forgive him? As many as seven times?’ Jesus answered, ‘I say to you, not seven times but seventy-seven times.’”

Mark 11:25 states: “When you stand to pray, forgive anyone against whom you have a grievance, so that your heavenly Father may in turn forgive you your transgressions.”

Further, we know that Christ asked His Father to forgive those who crucified Him. We know the story of the Prodigal Son, whose father rejoiced when he came home—just like our Heavenly Father rejoices when we return to Him after we distance ourselves from Him because of sin. In addition, we know that one of the greatest evangelizers in the Bible was first a man who persecuted and murdered Christians.

They were all forgiven!

Christ understands that offering forgiveness can be extremely difficult. Holding on to hurt is easy; letting it go is hard. Yet we must let it go because the hurt and pain eat us up inside, and resentment keeps us from growing as Christians. God wants more than that for us. However, He understands that forgiveness often comes in stages. There is no magic wand we can wave to take away our pain or anger. That is why prayer is integral; we must ask God to help us let go of the hurt. And we must keep asking for His help and guidance until we can truly forgive.

When we do forgive, we are acting in the person of Christ and giving a precious gift—to both the person who wronged us and to ourselves. That is what God wants for us. That is what will lead us to eternal life with Him.