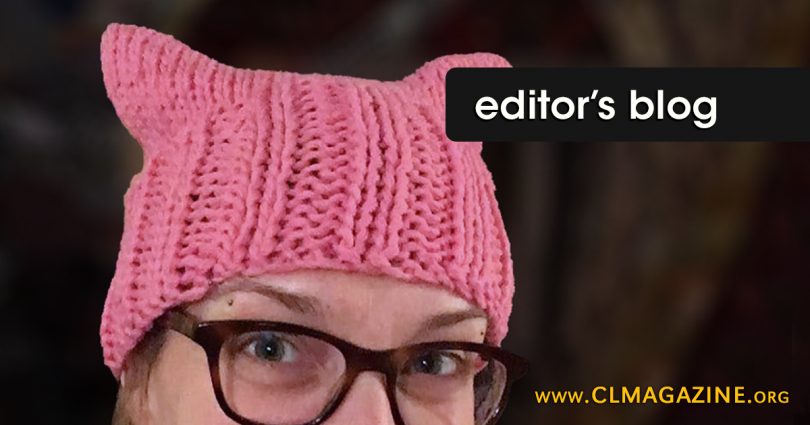 Barack Obama was the most pro-abortion President ever (see here and see his pro-abortion record here). The inauguration of Donald Trump today marks a definitive break from Obama and his administration marked predominately by death.

Naturally, confused, misguided, and straying souls, who cherish the culture of death, have no intention of permitting a culture of life to spread peacefully and replace that culture of death. They have planned a protest the day after the inauguration called the “Women’s March on Washington” (see here).

Preparation for the march has included a project called “The Pussyhat Project (TPP)” (see here), which the Huffington Post describes as follows:

The “Pussyhat Project” was launched over Thanksgiving by screenwriter Krista Suh and architect Jayna Zweiman….the women created the pattern for the cat-eared beanies as they were recovering from the aftershock of Trump’s win (see here).

Apparently, the most intelligent way to recover from the aftershock of not getting one’s way in an election is to knit a gazillion pink hats, while the best way to throw a temper-tantrum—oh, I mean “protest”—and fight for “women’s reproductive rights” is to stomp around the nation’s capital sporting said pink hats…and naturally, acting like impudent adolescents by coming up with an immature, crass, and vulgar name for your project.

Planned Parenthood CEO, Cecile Richards, is all over TPP. She posted the following to her Instagram:

According to their website, the name and purpose of TPP is as follows:

We love the clever wordplay of “pussyhat” and “pussycat,” but yes, “pussy” is also a derogatory term for female genitalia. We chose this loaded word for our project because we want to reclaim the term as a means of empowerment. In this day and age, if we have pussies we are assigned the gender of “woman.” Women, whether transgender or cisgender, are mistreated in this society. In order to get fair treatment, the answer is not to take away our pussies, the answer is not to deny our femaleness and femininity, the answer is to demand fair treatment. A woman’s body is her own. We are honoring this truth and standing up for our rights (see here).

If you are wondering whether TPP’s explanation here makes much sense, rest assured that it doesn’t.

First, this entire presentation is more or less based on what is known as the logical fallacy of “Argument by Emotive Language,” which is “[s]ubstituting facts and evidence with words that stir up emotion, with the attempt to manipulate others into accepting the truth of the argument” (see here). I have taken some philosophical licence and renamed this fallacy to “Argument by Vulgarity” in this case to describe TPP’s unique form of emotionally-based irrationality a bit more precisely.

Second, one cannot “reclaim” something that was never possessed in the first place. The vile word in question never belonged exclusively to anybody; it is a word in the English language available to everybody, and it has never been used as a complimentary word for women or female body parts.

Third, how is using an admittedly derogatory word in any capacity empowering?

Fourth, if you are born with female body parts and female DNA, you are biologically a female. The doctor or midwife who says “It’s a girl” upon birth is stating a fact, not arbitrarily assigning anybody with a gender.

Fifth, at face value, it is true that a woman’s body is her own, which is one of the main reasons it is morally reprehensible to end a girl’s life by destroying her body in abortion. Nothing denies femaleness and femininity to a woman more than willfully terminating her own child’s life.

More could be pointed out about the wishy-washy, imprecise, and irrational nature of TPP’s explanation for its existence and purpose, but at this point, it might be better just to roll our eyes and move on.

One thing is for sure, these pink hats are certainly not thinking caps.