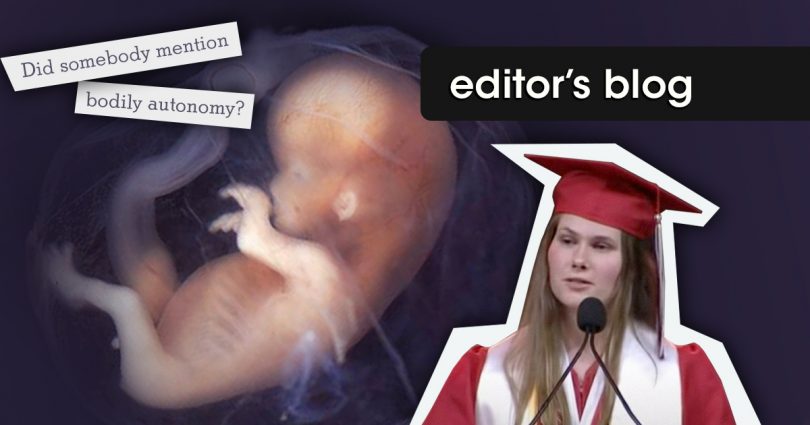 The end of the school year means summer fun and graduations. And, naturally, with graduations come valedictorians. To be the best in a class is quite a distinction—and an achievement that few earn.

Along with that distinction comes the opportunity to address one’s class for the last time in a speech that is meant to inspire, elicit hope, generate thoughts, and reflect on the past.

But, last month, a valedictorian in Texas decided to forgo her prepared speech and, instead, discuss her desire to murder preborn children.

Paxton Smith expressed her anger over Texas’ new (yet flawed) fetal heartbeat law that limits abortions to before a heartbeat can be detected in a preborn baby. So instead of using the valedictory platform to talk about her hopes and dreams, she talked about squelching the hopes and dreams of babies not yet born.

In her speech, Smith stated: “Before they have the chance to decide if they can take on the responsibility of bringing another human being into the world, that decision is made for them by a stranger. . . . I have dreams and hopes and ambitions. . . . I am terrified that if my contraceptives fail; I am terrified that, if I am raped, then my hopes and aspirations and dreams and efforts for my future will no longer matter.” (emphasis added)

Her speech speaks volumes about the lack of education today’s teens have. Her short-sighted, self-absorbed words reflect the fact that she has no respect for the value and dignity of each human being.

And her own words prove that she knows a preborn baby is a human being. The sad truth is that she just doesn’t care. She has been taught to put herself first and to believe that babies are bad, an inconvenience, or something that can be discarded at will.

Further, she has swallowed the lie that a woman cannot have hopes and aspirations AND a baby. Attitudes like this tell women that they must forgo something natural in order to be like men. Attitudes like this tell women that they are worth less and can accomplish less if they are mothers. This is so far from the truth! Yes, motherhood changes many things. And an unexpected pregnancy may alter plans, but it doesn’t have to destroy them. A baby is not the millstone around a woman’s neck that the abortion lobby teaches.

Smith states later in the speech: “I hope that you can feel how dehumanizing it is to have the autonomy over your own body taken away from you.”

Do you see the irony in her words? She’s speaking for herself, but the baby could say the same exact thing! Abortion dehumanizes the baby. In every abortion, a baby has his autonomy usurped as he’s torn limb from limb or killed by chemicals.

Contrast Smith with Katie Myers—this year’s valedictorian at the Academy of the Holy Cross in Kensington, Maryland. Myers has a younger sister with Down syndrome who has helped shape her outlook on life. In an interview, Myers explains the close bond she shares with her family and describes how her relationship with her little sister has influenced her participation in outside activities.

She coached her sister in both soccer and basketball for the Special Olympics. She participated in the Down Syndrome Network within her county. She also served as the president of a school group called Best Buddies, which “promotes friendship with people with intellectual and developmental disabilities.”

And no one has the right to squelch those dreams by taking a life.

The article concluded with Myers’ words: “The bottom line is, my Catholic education has definitely strengthened my faith quite a bit. That’s what will take me far, to have that solid base and foundation.”

Paxton Smith’s father told a reporter how proud he was that Paxton stood up for what she believed in and changed her valedictory speech. His sad and misguided statement should remind us that it is not our earthly fathers we are obliged to please. It is our heavenly Father.

We are not accountable to this world. We are accountable to God. And, when we meet Him face to face, He will ask us how we protected and defended the vulnerable, the weak, and those who could not speak for themselves.

What will we say?