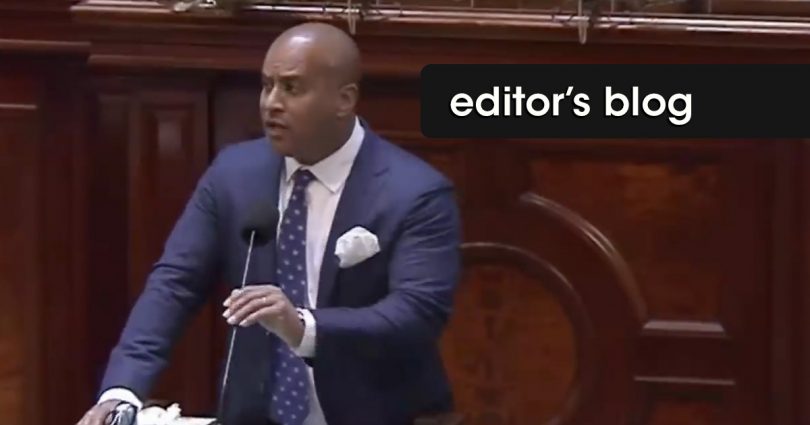 Have you ever watched someone speak and just felt so disgusted and disheartened that you had to walk away from the TV or computer? I felt that way watching South Carolina Representative Todd Rutherford (D) speak on the state’s House floor.

Rutherford spoke for just under five minutes, but it was a painful five minutes—and five minutes that made me sad for our country.

The representative began speaking about a meeting he had with some disabled residents who shared their stories of difficulty getting COVID vaccines. He also talked about teachers “needing” vaccines so they can return to the classroom.

Then he segued into his clear disdain for the state’s proposed Fetal Heartbeat Bill. While anyone with rudimentary skills in logic understands that this bill has nothing to do with COVID, Rutherford tried to make it seem that those who favored this bill don’t care about those suffering from the pandemic. It’s like trying to compare fiction novels and cheetahs. You can’t! Furthermore, caring about one does not mean that you don’t care about the other.

The Fetal Heartbeat Bill, which was later signed into law by the governor, outlaws abortion—except in a medical emergency—after a fetal heartbeat is detected in a preborn baby. Obviously, this is a flawed bill from a pro-life perspective because it does not protect all babies, but Rutherford continually expressed his disgust for this bill using both erroneous and nonsensical arguments.

For instance, he stated: “We don’t believe that life begins when science says it does not.”

Wait? What? When science says it does not? I think Rutherford needs to go back to a middle school science class. Science does prove—and teach—that a preborn baby is a living human being. All he needs to do is look at the Carnegie Stages of Development which chronicles the life of a preborn baby from the first moment of creation. He could also read a biology textbook or view a sonogram image.

Rutherford then goes on to say something even more idiotic: “The Democratic Caucus is not going to participate in this farce of a vote about pretend life because we know that there are real issues out there that are confronting us every day.” (emphasis added)

“Pretend life”? We’re not talking about a baby doll or an imaginary friend. There’s nothing pretend about a baby growing inside his mother. In fact, the reason he grows is because he’s alive!

After Rutherford’s speech, the Democrats behaved like an angry child who took his ball and went home in a tantrum. They all actually got up and walked out.

Watching this behavior, we have to wonder: Why are they so scared of preborn babies?

Before he finished his diatribe, Rutherford said: “I believe it’s somewhere in the Bible that states that: ‘Judge ye not by your words, but by your actions.’ And as we look at [the Heartbeat Bill], we can’t help but wonder whether we’re reading the same text.”

I wonder the same thing, as what he’s referring to is the Bible verse from 1 John that says: “Children, let us love not in word or speech but in deed and truth.”

“Love in deed and truth.” That is what pro-lifers do every single day. It is the antithesis of how pro-abortionists live. Pro-lifers teach the truth that a preborn baby is a living and valued human being from the moment he is created. We put our words into actions by trying to protect every single baby. And then we take action to care for the mother and to show her she’s loved and valued too.

Please pray for Rutherford and for men and women like him. Their disdain for babies, their misguided beliefs, and their injurious actions cause our country to sink deeper and deeper into a culture of death.

But the truth is on our side. We know it, and we must teach it.

So be indignant. Feel disturbed. Allow your anger at his words—and the words other pro-aborts—to spur you to peaceful action to effect change. If we don’t stand up for the babies, who will?