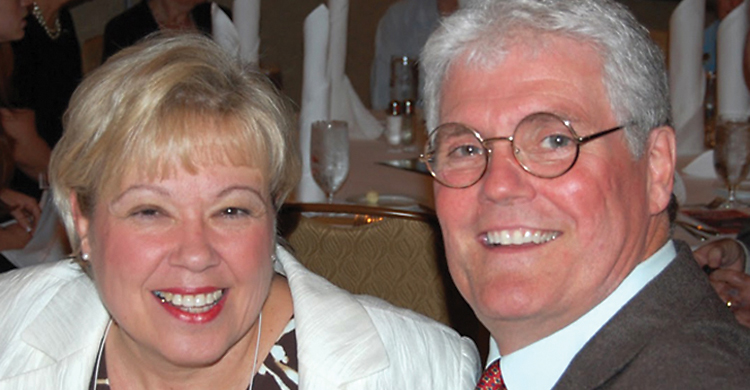 Love is wanting what’s best for the other person. It’s putting the other person’s wants and needs before your own. Nowhere is this truer than in marriage, wherein each spouse vows to love, honor, and cherish the other in sickness and in health—until death. However, solid marriages don’t just happen. They’re cultivated.

Such is the case with Canadian couple Mark and LaRee Pickup. Living next door to each other since the age of three, the two literally grew up together. Their childhood friendship blossomed into love—a love that prompted a marriage proposal from Mark when he was just 20. For years, their marriage was like any other. The couple worked hard. They had two children—a daughter and a son. Mark held a position with the Canadian government while LaRee stayed home with the kids. Things were going well.

In 1984, after 10 years of marriage, Mark’s health began to inexplicably decline. Concerned, he went to a doctor—and suddenly their whole world was turned upside down. At age 30, Mark was diagnosed with multiple sclerosis. This devastating news left the couple reeling in grief and disbelief.

At first, Mark’s coworkers were understanding, lightening the load and helping him out whenever possible. But as the disease progressed and his physical abilities deteriorated, he was forced to retire at 38—a decision that deeply demoralized this man who had always been strong, and had imagined working and supporting his family until much later in life. Now, he would need their support. Yet, they would all find that strength comes in many forms.

Mark and LaRee also soon discovered that, unable to handle Mark’s diagnosis and unsure of what to say, many of their friends stopped coming around. The couple felt alone and isolated as Mark began losing the ability to walk and do things on his own, including some of the things he loved most, such as drawing and playing his beloved guitar. His autonomy was slipping away.

Meanwhile, LaRee faced her own challenges. Already taking care of two small children, she now found herself caring for her husband too. The fear was almost overwhelming, and she wondered if she could handle it all.

At times like this, we need the love and support of family; yet many of LaRee’s family members encouraged her to leave Mark, insisting it would be easier for her financially and emotionally. They argued that she was still young and could move on with her life, and that she would be better off leaving and being unburdened.

Though her Christian faith was rocky at the time, she remembers praying for guidance and feeling God’s presence. Her faith commanded her to honor her vows. As she reflected on the idea of divorcing Mark, she realized that nobody seems any richer after a divorce. By staying, she knew she would grow, as a person and a wife. She credits the Lord with helping her recommit to her marriage and her family.

Mark and LaRee understood that the road ahead would be difficult, so they made a conscious decision—and a mutual promise—to always talk about feelings, fears, and hopes for the future. Holding back feelings wasn’t an option, even if it meant that tears would flow, for without genuine communication, the marriage would fail. They were a team and they intended to act like one.

Mark and LaRee have now been married for 41 years. They have endured tragedies, setbacks, and heartaches, but also abundant love and happiness. Through it all, they have loved and stood by each other. This is a miracle in and of itself.

As Mark’s disease progressed, he became increasingly disturbed by those who believe that suffering from a disease should be cause to end a life prematurely. Assisted suicide was being passionate debated, especially in Canada, and Mark knew he must stand up for life. He, too, had gone through dark days—days when he felt he couldn’t get out of bed, days when he didn’t want to live. But the love and support of family, as well as his faith, always helped him realize the value of his life, even if his body couldn’t function properly. He wanted to share his experiences and teach others the value of every human being.

In 1992, prompted by the possibility of assisted suicide being decriminalized in Canada, Mark wrote an 18-page paper that opposed it. When members of the Canadian Senate heard about and read his paper, they invited Mark to address them. His impassioned and eloquent speech soon led to other invitations—from groups and churches throughout the US and Canada—to speak about this topic. This development opened up a whole new world for Mark and also for LaRee, who began to travel with him. They spoke together at churches and for various organizations on matters such as disability, assisted suicide, and the sanctity of life in general.

At a 2005 conference at which Mark was speaking to families of people with disabilities, someone from the crowd posed this question: “How did your family deal with this?” Instead of Mark, LaRee took the question and answered, “It is easier to be than to watch.” Her words resonated with those in the audience who had a tremendously difficult time watching their loved one’s health decline. The sadness and helplessness they felt were validated with her simple words of understanding. And it was then that LaRee realized she too had something to offer: hope.

Understanding that disabilities affect the whole family, not merely the individual, Mark and LaRee set out together to make this point absolutely clear, especially when giving talks about assisted suicide. They stress the importance of offering support and teaching others how to find it. To those struggling with their own disease or that of a loved one, Mark and LaRee suggest connecting to a faith community or getting closer to one, if already a member. They stress the importance of being around others who will guide them. And most importantly, they stress that if there’s a purpose to be found, it can only be found in Christ. They urge everyone to stay close to God, to pray regularly, and to lean on Him.

Love to the very end—and its unexpected miracle

Upholding the sanctity of life includes making sure the elderly are properly cared for. Mark and LaRee have firsthand experience in this matter as well. In her later years, LaRee’s mother, Dorothy, became sick and unable to take care of herself. She needed nursing home care, but LaRee and Mark wanted a nursing home that would respect their pro-life wishes and not hasten her death. Their fear was that Dorothy would be viewed as expendable.

Though Dorothy was cognizant and able to speak for herself, LaRee was her advocate at the nursing home, to make sure their wishes were always respected. Just as Dorothy took care of LaRee as she was learning to raise two small children and help her newly diagnosed husband at the same time, LaRee cared for her mother through her last days, even skipping a speaking engagement to be with her.

After Dorothy passed away, her belongings were kept at Mark and LaRee’s house. This past spring, as Mark gazed upon his mother-in-law’s walker, something inside told him he could stand. It had been 20 years since he was able to walk—and that was with assistance. Slowly, gingerly, he pulled himself up on the walker, and to his surprise, he was able to not only stand but take some steps. It was a time of rejoicing, not only in the Pickup household, but also for his blog readers (see the sidebar). Understanding that this may be merely a short-term improvement, Mark continues to take steps using the walker and attributes this miracle to Christ.

People in today’s society often think in terms of what others can do “for me” rather than what they can do for others. Life is often held in very little regard unless it’s wanted, healthy, or young. Babies are viewed as disposable. The elderly are hastened toward death. And those with diseases are seen as having less worth than the healthy.

So, how can we restore a respect for life? During their talks, Mark and LaRee encourage others to be advocates for life—to get involved in a disability organization or a Christian hospice, to go into a nursing home and talk to someone who has no one, or be a friend to someone who needs one. A smile, an encouraging word, or a few minutes given selflessly can make a huge difference in someone’s life.

Many people are hurting, terrified of the future, and feeling alone and powerless. In this situation, it’s easy to lose the will to live. But Mark offers solace: “I know that despair. I know the pain. Surrender it to Christ. Turn to Christ. In Christ, we find meaning and purpose to suffering.”

Christ knows and understands pain. He bore intolerable pain on the cross, and He will never leave His children alone. When we need help or comfort, we need only ask. The poem “Footprints in the Sand” describes a man looking back on his life. He notices that there are two sets of footprints in the sand and is comforted by the fact that the second set belongs to Christ. But he grows concerned when he sees only one set of footprints during the difficult times. Thinking God abandoned him, he asks God where He was then. God’s simple reply is that He carried him through those times. Mark and LaRee wish for everyone to understand this and ask for God’s help. He will carry us if we have faith. He has carried them.

Using his gifts in the service of life

Mark has always had a flare for writing, so in 2007, he began a blog entitled Human Life Matters to discuss matters “pertaining to natural dignity and worth that all humanity deserves under the Lordship of Jesus Christ.” Writing became an important outlet for him, to not only reach others who may be suffering as well, but to help him cope with the emotions he has endured as his disease progresses. Additionally, he writes a monthly column about respect for life and human dignity for the Western Catholic Reporter of Edmonton, Alberta. His words have touched countless people.

Mark continues to tour the US and Canada to fulfill his speaking engagements. He has also worked with theEuthanasia Prevention Coalition and was slated to address the Alberta Life Issues Educational Society in October. You can contact Mark or invite him to speak to your group via his blog or at markpickup@shaw.ca.