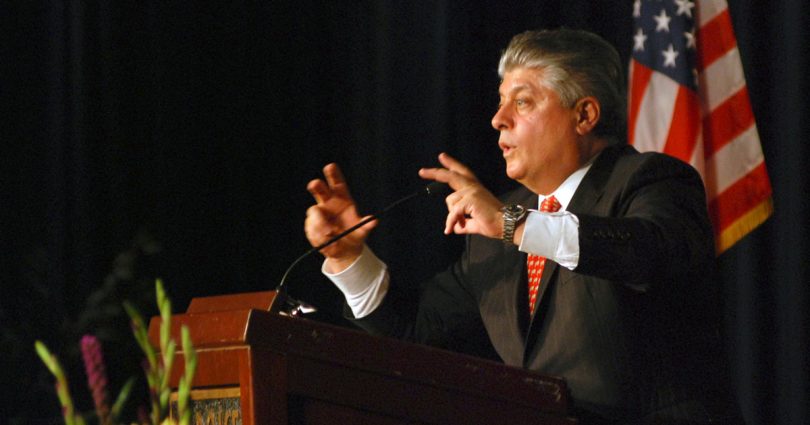 Since the judge stands for all natural rights, he’s gained a following that transcends politics. Nick Gillespie, editor-in-chief of the magazine Reason, is no fan of God, the Church or its pro-life teachings, but he respects Judge Napolitano. Thus, Gillespie asked the judge about his faith and abortion. After Judge Napolitano told Gillespie that he considers abortion first-degree murder and the states should outlaw it and prosecute doctors who commit abortions—Gillespie responded with another interview.

The judge’s educational campaign to alert Americans about their natural/constitutional rights also inspired a cult of Ron Paul supporters to try drafting him as the congressman’s presidential running mate. Judge Napolitano discussed it with them, but graciously declined the invitation. After all, he intends to honor his contract with Fox and he likes his role as a civil libertarian in media.

Judge Napolitano’s latest book, A Nation of Sheep, doesn’t directly speak to pro-life strategy, but it grippingly addresses much of what activists need to know.

First, he inquires whether his readers are sheep or wolves. To him, sheep are “those who stay in their herd and follow the shepherd without questioning where he is leading them.” The “shepherd” is the government and all its powers, from executives to lawmakers to law enforcement officials to judges.

However, wolves “do not aimlessly follow the shepherds.” Instead, he said wolves howl in the night, alerting the shepherd and questioning him. They demand that the government recognize and protect their natural rights. So, by Judge Napolitano’s definition, active pro-lifers are wolves.

In keeping with the theme of his book, Judge Napolitano is also a wolf among sheep in the Church and he holds Catholics responsible for our culture.

“What’s relevant to your article is that Catholics return to their roots,” he said. “If Catholics kept the faith, Roe versus Wade would never have happened. There’s no question in my mind. If Francis Cardinal Spellman was the archbishop of New York and Bishop Fulton J. Sheen was still on television, 90 percent of these things wouldn’t have occurred because people would’ve formed their consciences in accordance with the teaching of Holy Mother Church. Catholics would know what the teachings are because they would’ve been discussed from the pulpit and in the marketplace. But today’s sermons are frequently given by deacons and they frequently sound like [motivational speaker] Tony Robbins—work hard, keep your nose to the grindstone. There’s nothing wrong with that in life, but there’s nothing particularly Catholic about it either.

“I was about to explode there,” Judge Napolitano exclaimed. “Patrick Cardinal O’Boyle, down where you are in Washington, D.C., used to banish priests to a Trappist monastery if they dared to speak out against Humanae Vitae. You don’t hear about that kind of stuff anymore, but we need that type of courage in the hierarchy. Unless and until we get it, you can’t expect the average Catholic to change—because they don’t know what to believe. The bishops have lifetime jobs, so what the heck are they worried about? This is a longtime problem and I think my generation was the last to be raised in traditional Catholicism.”

As we now know, Cardinal O’Boyle did his best amid tremendous strife within the Church. All things considered, Judge Napolitano believes that bishops should correct Catholics who violate the Church’s pro-life teachings and protect the Eucharist from sacrilege.

So, the judge perked up as he said, “My hero in the hierarchy is Archbishop Raymond Burke of Saint Louis. He is just a tiger for truth and there are others in that category: Archbishop John Meyers of Newark, Bishop Fabian Bruskewitz of Lincoln, Archbishop Charles Chaput of Denver and Archbishop Timothy Dolan of Milwaukee.

“This is the standard, the most fundamental issue of the day— whether or not babies have the right to live and whether or not Catholics can, under any circumstances, condone their destruction,” Judge Napolitano stressed. As I heard him tell Washington policymakers at a dinner, there is no exception to an unborn child’s right to life.

On the 35th anniversary of the infamous Roe ruling, Judge Napolitano counsels pro-lifers to use the peaceful weapon of prayer. He says the Rosary and believes that we should pray for the babies who have died by abortion. Then he recommended, “Pray for a softening and warming of the hearts of those who are on the other side. You never know when someone from the other side will answer those prayers. A great example is Bernard Nathanson—he’s now the abortionists’ worst nightmare— even though he was once the most prolific abortionist on the planet.”

Next, Judge Napolitano addressed the war of words because words have psychological power.

Therefore, he insisted, “Do not allow the abortion crowd to dominate terminology. I refuse to call them ‘pro-choice.’ I always call them ‘pro-abortion.’ It tells us something about what they think of themselves: that they can’t even say what they are so they chose a neutral word like ‘choice.’ But to me ‘choice’ means you choose to have sex and accept the natural biological consequences of that choice. Even good friends of mine—friends at Fox—get very irritated when I call it ‘pro-abortion.’ I refuse to let [abortion advocates] control the dialogue.

“In that category,” he continued, “you don’t have to have the final word, but you have to be out there, using the real words to every argument they make.”

Judge Napolitano said, “The third category is to be cheerful— even humorous. When the pro-life mission began, it was all male. It was all Irish Catholic men and a lot of them were dreadfully, ponderingly, overwhelmingly serious. They never cracked a smile or made people laugh. But a sense of humor disarms the other side.”

In the judge’s judgment, since women moved into pro-life leadership roles, the cause has been advanced immeasurably in our direction. He said, “It steals the objection that these decisions are being made by unmarried males in the Church hierarchy.”

On that note, Judge Napolitano’s favorite pro-life leader is a woman. He explained, “I say that because it’s politically wise and because the Church teaches that we should go to our Lady, the Blessed Mother. Not a Mass should be said without reference to her. Not a war should be waged, not a prayer should be uttered, not a contact should be sought without her assistance.”

Andrew P. Napolitano is the youngest life-tenured Superior Court judge in New Jersey’s history, where he served from 1987 to 1995. For 11 years, he was adjunct professor of constitutional law at Seton Hall Law School in Newark.

In 1995, Judge Napolitano returned to private law practice and began television broadcasting. In 1998, he joined Fox News Channel, where he’s senior judicial analyst and appears on various programs, including The Big Story with John Gibson and The O’Reilly Factor.

Weekdays from 9 AM to noon ET, he co-hosts Brian and the Judge live on Fox News Radio with Brian Kilmeade.

The judge’s workdays at FNC are long and his assistant calls him “amazing.” Judge Napolitano said, “The good Lord didn’t give me everything I wanted, but he gave me a lot of energy and a lot of hair—and both work in this business.”