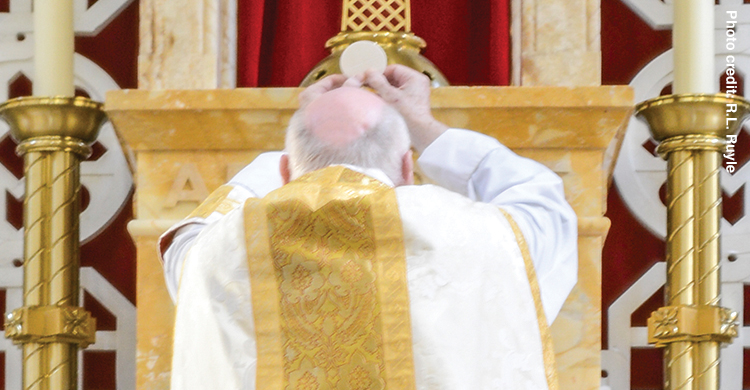 Every Thanksgiving Day, the students and staff at the Priestly Fraternity of St. Peter’s Our Lady of Guadalupe Seminary in Denton, Nebraska, take a break and head outside for some football. The game has become an annual tradition, complete with a trophy for the winner. It’s known as the Buckley Bowl, named after Father James Buckley, FSSP, a beloved seminary professor, spiritual director, and veteran quarterback.

Now in his 50th year as a Catholic priest, Father Buckley’s arm isn’t quite what it used to be, so he retired a few years ago from playing in the annual football game, but he continues to pass on the faith through his teaching and example.

In five decades, Father Buckley has impacted the lives of countless numbers of Catholics as a  schoolteacher, missionary, parish priest, writer, and retreat master. His assignments have taken him to New York, Virginia, Maryland, Texas, Arizona, California, Pennsylvania, Nebraska, and the east African country of Tanzania.

A gradual attraction to God’s call

Father Buckley doesn’t remember a particular moment when he felt God calling him to a religious vocation. His attraction to the priesthood incubated as he grew up in a devout Irish Catholic parish in the South Bronx “where everything, it seemed, went to Mass.” While attending grammar school with nuns and religious brothers as his teachers, he became interested in joining an order. He remembers several religious communities visiting his eighth-grade class, but the only one that invited him to take a look at its seminary was the Society of the Divine Savior, better known as the Salvatorians.

He made a visit and liked what he saw. “So I joined up—and I stayed,” he recalled. He entered Mother of the Savior Seminary in Blackwood, New Jersey, at the tender age of 13. Six years there were followed by a novitiate year in Iowa. Then he was sent to the Salvatorian House of Studies in Maryland and the Catholic University of America to study philosophy. His next assignment was teaching at a high school in Milwaukee before returning to the House of Studies and CUA to study theology in preparation for his ordination in 1965.

Father Buckley subsequently taught at a Buffalo, New York, high school and a junior seminary in Galt, California. While in California, he worked on a master’s degree in English literature. This was followed by a five-year stint in Tanzania for parish work and teaching at a junior seminary. He then returned to the United States for a parish assignment in Arizona, followed by a high school teaching stint in Nevada, and parish duties in Texas and Virginia.

Father Buckley never envisioned becoming so immersed in teaching when he started his seminary  studies. “It’s something I fell into. Initially, the only reason I got into it was [because] the religious community I was associated with had that as an apostolate,” he explained. “Once I got into it, I loved it very much. . . .At some time or other, it became my preferred occupation.”

Defending the Holy Eucharist and the preborn

Father Buckley has consistently been a staunch advocate for preborn children. He has never shied away from speaking from the pulpit about the evils of abortion—and has even gone to jail several times to oppose it. While serving in Virginia, he became acquainted with the Brown family and, at Judie Brown’s request, became a trusted adviser and spiritual director for American Life League.

“I demurred at first because I didn’t think that I had the ability,” Father Buckley said. “There were other famous priests nationally that qualified, but she said she would feel comfortable [with him], and so I did it.”

His counsel has been invaluable for ALL’s Canon 915 program, which calls for Church leaders to protect the Holy Eucharist from scandalous reception by prominent public supporters of the culture of death.

“Father James Buckley has been an inspiration to me for many years. His agreement to step into the shoes that were left vacant upon the death of our previous spiritual advisor thrilled me and, in fact, our entire board, to no end,” ALL cofounder and president Judie Brown affirmed. “Not only has he been a source of guidance to us as we discuss and write about matters pertinent to the Church, it was his guidance and urging in 2001 that led to ourCanon 915 program. As he pointed out early on, your objective is to focus on the scandal that the bishops are, in general, unresponsive to Canon 915.” This canon (see the Code of Canon Law) stipulates that those who are “obstinately persevering in manifest grave sin are not to be admitted to Holy Communion.”

When ALL launched the program, Father Buckley wrote, “It is from evidence of fact and not from the denunciation of an ecclesiastical tribunal that all men know that some Catholic politicians are obstinate in the manifest grave sin of formal cooperation in abortion. These are notorious sinners who should not be given the Eucharist.”

Over 10 years later, he sees some progress in enforcement of Canon 915, but much work still to be done by the Church hierarchy.

“At least it’s been advancing because Cardinal [Raymond] Burke has talked about it, as well as other prelates,” Father Buckley said. “You might say it’s formed the issue and made some prelates answer. They have to say, ‘Are you going to support 915 or not?’ But apparently there’s a lot of hesitation on the bishops’ part. They’re not all convinced of their obligations to support, to endorse, [and] to stand behind 915. That’s quite obvious because there are so many pro-abortion Catholics in high places who have received Communion in public.”

Choosing to look the other way is detrimental not only to the recipient of Holy Communion but to the Eucharistic minister, Father Buckley cautioned, because “it’s a law that imposes or impinges upon the one who gives Communion. He’s cooperating in evil. But there are a number of bishops that don’t look at it that way. They don’t confront it.”

Father Buckley is encouraged by polls showing growing support among young Americans for preborn children’s right to life. “But at the same time, the young people are supporting homosexual unions,” he pointed out. “So that’s troublesome. They’re not properly catechized. They don’t see the connection between marriage and children.”

A return to tradition

The traditional Latin Mass (now more frequently referred to as the extraordinary form of the Mass) was offered universally before the Second Vatican Council (1962-65) mandated dramatic changes to the liturgy of the Catholic Church. By 1970, the traditional Mass had been radically reformed and largely replaced by a liturgy allowing the use of native languages, among other significant changes.

Father Buckley preferred the “old” Mass, but as an obedient servant of the Church, he followed the liturgical norm throughout the 1970s and much of the 1980s while continuing to serve his order. “Initially, I was supportive of what the Catholic Church was doing [with the Mass after the Council],” he said. “But as time passed, I had more and more misgivings about the vernacular. It was not just the vernacular translation, but everything else that came with it. There were no longer altar rails; people received Communion in the hand. It was a denigration of the Blessed Sacrament, I thought. I gritted my teeth and bore it, but when I had an opportunity to join a group that celebrated the old Mass exclusively, I took it.”

In the late 1980s, Father Buckley became acquainted with an order whose charism was the traditional Latin Mass. Pope John Paul II had cleared the way in 1988 with his motu proprio (a document issued directly by the pope himself), Ecclesia Dei, which allowed Mass to be offered, with the local ordinary’s approval, in the preconciliar form, as it had been done for hundreds of years. That led him to the Priestly Fraternity of St. Peter, which offers Mass exclusively in the extraordinary form. He knew that’s where he wanted to be, and at the invitation of Father Michael Irwin, FSSP, he joined the order in 1992. By 1994, Father Buckley was teaching in its seminary in Pennsylvania.

Twenty years later, Father Buckley is still on the faculty of Our Lady of Guadalupe Seminary, which has since relocated to the middle of Nebraska farm country. The seminarians are steeped in authentic Church teaching and instructed in the extraordinary form of the Mass. He teaches them apologetics, Catholic liturgy, pedagogy, American and English literature, and homiletics. More than 70 seminarians taught by Father Buckley are now priests. That’s a great joy for him. “And there’s the consolation that none of my former students have lost the priesthood,” he added.

Father Buckley is also pleased to see the growth in popularity of the traditional Latin Mass. Since the 1980s, inNorth America alone, the number of parishes offering the extraordinary form has grown from 100 to more than 400 and Fraternity-staffed parishes have expanded from a few into over 40 currently.

“The people are very appreciative that they can worship traditionally and [practice] all the devotions they once enjoyed, and especially that they have great access—I’ve noticed wherever I go—to confession,” he said. “They’re very much involved in the pro-life movement [and] the Legion of Mary.”

At age 77, Father Buckley remains committed to his work and seemingly never tires of serving the Church. “We look at him as one who’s going to keep going. He’s a fighter,” said Father Eric Flood, FSSP, the Priestly Fraternity’s district superior of North America. “As long as he can keep teaching, he’s going to continue at the seminary and be there for the seminarians. He has a sense of humor. He has a camaraderie with the seminarians and he likes to joke around. He enjoys teaching, but at the same time he wants you to know [the subject matter].”

Father Buckley doesn’t lose touch with his former students after their studies are completed. A few years after Father Flood was ordained and assigned to a parish in Kansas, his former professor drove from the seminary in Nebraska to play basketball with him. “We’d go out there on the basketball court, and I would beat him every time,” Father Flood recalled, laughing.

Father Buckley is able to gauge the pulse of the Church outside the seminary by reading and traveling nationwide to give retreats according to the Spiritual Exercises of Saint Ignatius of Loyola, which he does when seminary classes are not in session. He made his first such retreat as a priest and was so taken with the exercises that he offered his assistance. He eventually became a retreat master, and for the last 30 years, he has given over 100 Ignatian retreats to religious and lay faithful. “I’m sold on it,” he said. “It’s a great means of holiness, and I think it’s needed.”

“He’s touched people’s lives giving retreats,” Father Flood said. “He has a personality that breeds respect. He gets it merely by being himself. There are some who have to try hard to earn it. It’s just natural for him.”

Based on his travels and work with the lay faithful, Father Buckley sees positive signs (such as perpetual adoration, lay apostolates, and traditional Masses) mixed with some troubling trends among American Catholics. “We can’t justify people receiving Communion in blatant mortal sin. We can’t think it’s fine that there’s a widespread denial of the Real Presence, which we know through polls,” he said. He laments the fact that so many Catholic marriages end in divorce and the high number of Catholics, especially men, who don’t practice the faith.

Only God knows what the future holds for the Church, but Father Buckley will continue to soldier on as long as he’s able to speak and share the truth. After 50 years of devotion to the Church, there’s still more teaching to be done.