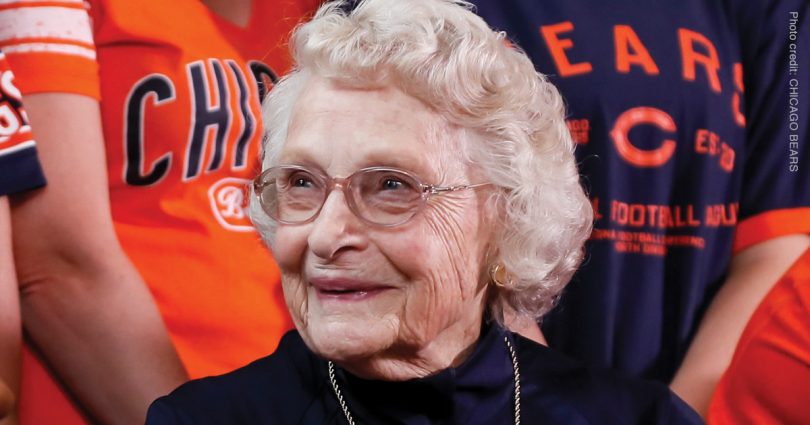 “I still don’t consider myself magazine material,” Virginia McCaskey stated humbly at the conclusion of her interview with Celebrate Life Magazine. Mrs. McCaskey is the owner of the NFL team the Chicago Bears and daughter of late NFL legend George Halas. Her father founded the Chicago Bears, was a cofounder of the NFL, and was one of 17 men inducted into the NFL Hall of Fame’s inaugural class in 1963. Virginia says football simply runs in the family, but I suppose you could say that faith runs in the family as well.

Virginia and her family converted to Catholicism in her formative years. She credits this decision to her godmother’s dedication to the rosary. Since then, Virginia says her Catholic faith—especially her devotion to the Blessed Mother, whom she names as her favorite saint—has been a basis for everything in her life. “I don’t think you can do much better than [the Blessed Mother],” Virginia laughs. “It’s like being asked my favorite football player,” whom she then names as Walter Payton. Payton was not only the greatest running back in the history of the NFL, but he was also a trendsetter off the field because of how much he gave back to his community. In remembrance of his example, the NFL annually awards the Walter Payton Man of the Year award to an NFL player who excels on the field, but who also displays excellence off the field through both community service and charity work.

It’s very fitting that such a meaningful Christ-centered award be named after a Chicago Bear, as the McCaskey family has also established a century-long high degree of excellence both on and off the field.

The guidance of our loving mother

Through the hustle and bustle of raising a family and then later “raising” a football team, Virginia has always used the rosary as a guidepost. “When I can’t sleep, or when things get too heavy to think about, I have the rosary to hang onto,” she says. When her children were still young, she and her late husband, Ed, would gather their family to say the Rosary after dinner. Even when the task seemed daunting and schedules were harried, they persisted because they understood the importance of rooting their family in faith. “Sometimes I wondered if we were really doing the right thing, with all the things kids could be distracted by in the living room, but we continued, and now I couldn’t get through a day or a night without praying the Rosary,” she explains.

Virginia has made this reliance on faith and the Blessed Mother the center of her life. In life, as in football, nothing will ever be perfect. When things get difficult, Virginia says she often quotes the old adage “sticks and stones”—something her late mother taught her. It helps her retain perspective on what is truly important in life.

For instance, in 2018, the Bears went 12-4 in the regular season and made it to the playoffs for the first time in eight years. In addition, Coach Matt Nagy won the NFL Coach of the Year award. But the following year’s regular season culminated in eight wins and eight losses. “Sticks and stones,” Virginia says, and believes that this is where faith comes into play. Football is fantastic, she states, but it’s not everything: “Football, the Super Bowl, these are all great things, but there are many more important things in life.”

She learned this valuable lesson from her father, whom she knows was a great leader. She told Celebrate Life Magazine that her father and ALL’s president, Judie Brown, have a lot in common—a comparison, she says, she had not thought of before sitting down to be interviewed for this article.

Virginia compared the two icons saying, “They were and are real leaders, thinking of things the rest of us are just in awe of.” When she first heard of Judie Brown and of her work to save the babies, Virginia says she could tell Judie had a “genuine heart in the fight”—a quality that reminded her of her father’s dedication to football. George Halas was a trendsetter and a leader in the NFL, just as Judie Brown is a trendsetter and a leader in the pro-life movement. Both Judie and George share grit, determination, and the trust to walk by faith rather than by sight.

In the early years of their marriage, as Virginia and her husband busied themselves with raising a family, word got around their town that an abortion facility would soon open right across the street from their local hospital. “It felt like a personal attack on our values and our neighborhood,” Virginia recalls. “We knew we needed to do something more than write letters and write a few small checks to different organizations.”

It was then that Virginia and Ed found the good works of American Life League. Virginia recalls being immediately impressed by Judie’s courage and conviction. She recalls: “These people [Judie and Paul Brown] were going all out for what they believed in. They were giving more than just lip service to the cause.”

From then on, she felt a calling, and the McCaskeys have been supporters of American Life League ever since. Virginia says she always looks forward to new issues of Celebrate Life Magazine. “I can [read the magazine] and expect to read the truth,” she says. What started out as a one-page newsletter has come a long way in delivering positive truth to dedicated readers like Virginia and her family.

“Judie always has a positive take on all the issues,” Virginia says of the magazine. “She never holds back,” she laughs. This quality of Judie’s has always truly impressed Virginia. Much like George Halas, Judie has never been afraid of the opinion of others. “My father stood up for what he believed was right, and Judie does that also. She is fearless and stands up when most others do not,” Virginia says.

When asked about people who say life is losing in America, Virginia disagrees and says she is starting to see a shift in the tide. She thinks a bit and recalls the recent March for Life: “I wonder if [these people] have ever watched the telecast of the March for Life,” she ponders. She expresses her admiration for those who sacrifice so much to participate: “Even though they don’t get any recognition, you cannot deny the numbers [of those who participate],” she says. “And who would have thought at the beginning of all this [Roe v. Wade] that the president of the United States would attend the March for Life?”

Indeed, Virginia says she sees attitudes changing about abortion. “I used to be the weird one who would let abortion affect my voting and my choices, now it seems everyone else is finally catching up,” she admits.

When asked what she thinks is the most effective tool in getting the message out to mothers about the reality of abortion, Virginia says she thanks God for the invention of the sonogram. “[The mother] can face the reality that this is a living child,” not a blob of tissue.

She reflects a little more and says that, in the beginning, it used to bother her that the pro-life camp seemed to be so divided and that every group seemed to be working on a different project rather than working together. However, she says she now realizes that this is a good thing: “There are different areas in which we can help in activism, so I try to be supportive.” And supportive she has been. Mrs. Virginia McCaskey is one of American Life League’s and Judie Brown’s longest supporters.

“Even at my age I’m still learning,” laughs 97-year-old Virginia McCaskey. This incredibly humble and devoted woman inspires all who know her with her unwavering devotion to faith, family, her football team, and yes, the babies. 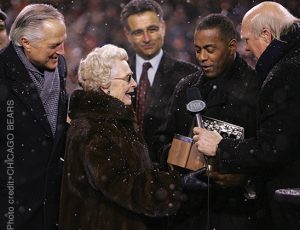 On Saturday, May 16, 2020, Virginia’s oldest son, Michael, tragically passed away at the age of 76 after a lengthy battle with cancer. American Life League remembers Michael McCaskey and his family in our prayers, and we offer our deepest condolences to Virginia and the entire McCaskey family.

Born in 1943, Michael McCaskey was the oldest of the 11 McCaskey children. Inheriting his family’s love of football, Michael played and lettered in football at Yale. He graduated in 1965 and spent two years as a Peace Corps volunteer in Ethiopia teaching English, science, and music to junior high school students. In 1972, he earned his doctorate in business from Case Western Reserve University. He taught management and organizational behavior at UCLA for three years before joining the faculty of the Harvard Business School.

When his grandfather, George Halas, died in 1983, Virginia took over as the Bears’ owner. Michael then joined the team as president and chief executive. He played an integral role in the Bears’ success during the 1980s, and he took great pride in the 1985 Super Bowl season, saying winning the Super Bowl was one of his greatest memories. His tenure as president and chief executive ended in 1999 when he succeeded his father as Chairman of the Board. He retired in 2011.

In addition to his love for football and the Bears, McCaskey was also known for giving back to the community. In 2005, he cofounded the Bears’ charitable foundation, which has granted more than $20 million to over 100 Chicago-area agencies that focus on youth athletics, education, and medical research.

Those close to Michael remember his passion for both football and family. The profound impact he had on his community, the Bears, and his family will always be felt.

We humbly ask all of our readers to please offer up a Rosary for the repose of the soul of Michael McCaskey and to pray for Virginia and her family during this difficult time.

Hugh R. Brown is the vice president of American Life League. He is also a cofounder of St. Michael the Archangel Catholic High School in Fredericksburg, Virginia, and president of the Catholic Business Network of Central Virginia.