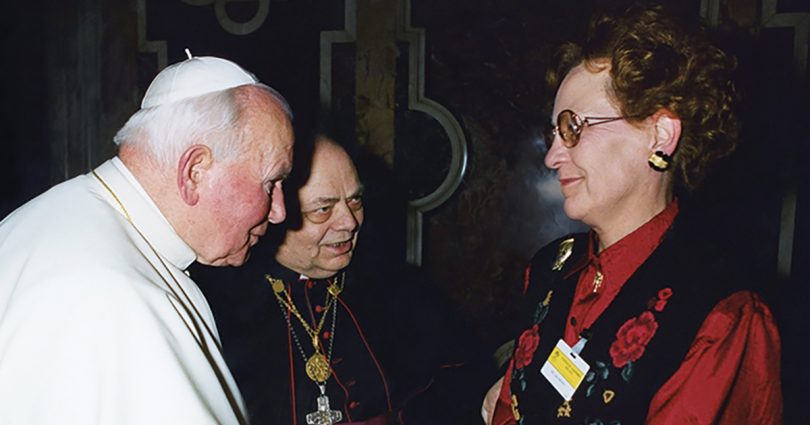 American Life League was founded on April 1, 1979. By what I have come to believe is no coincidence, two amazing events happened within six months of that date. Cardinal Karol Jozef Wojtyla was elected pope of the Catholic Church just six months earlier—in October 1978. And six months after ALL’s founding, Rev. Denis O’Brien, MM, became its spiritual director and served in that capacity until his death in 2002. These occurrences in 1978 and 1979 combined to create one of the most pivotal juxtapositions in our organization’s history.

Pope John Paul II was, from the first instant of his election, a shepherd dedicated to respect for the dignity of the human being. This is vividly captured in his many Wednesday homilies, encyclical letters, and apostolic exhortations, in addition to his addresses to various groups and Vatican organizations.

The 1981 apostolic exhortation. Familiaris Consortio (On the Role of the Christian Family in the Modern World), was the first of his writings that came to our attention, and it demanded careful reading and examination. We wanted to get a grasp on how this pope was going to move forward in his defense of the family and, particularly, the vulnerable in our midst—born and preborn.

Familiaris Consortio gave us that understanding. Pope John Paul II shared his profound insights into the inherent holiness of matrimony and the full expression of divine love within it. He taught us that when marital love is based on trust and faith in God, it inspires even the faint of heart to revisit what the family was designed to accomplish. This sharply contrasts with what we see so often today: a dysfunctional, mechanized existence based on lack of trust and lack of respect for one another. In section six, he wrote,

[S]igns are not lacking of a disturbing degradation of some fundamental values: a mistaken theoretical and practical concept of the independence of the spouses in relation to each other; serious misconceptions regarding the relationship of authority between parents and children; the concrete difficulties that the family itself experiences in the transmission of values; the growing number of divorces; the scourge of abortion; the ever more frequent recourse to sterilization; the appearance of a truly contraceptive mentality.

At the root of these negative phenomena there frequently lies a corruption of the idea and the experience of freedom, conceived not as a capacity for realizing the truth of God’s plan for marriage and the family, but as an autonomous power of self-affirmation, often against others, for one’s own selfish well-being.

Such profound words, which became a recurrent theme in many of this Holy Father’s writings, made an indelible impression on me. His teachings were imbued with the inspiration and movements of the Holy Spirit. Of that, there has never been any doubt.

A great teacher of truth

As I became more immersed in Pope John Paul II’s ability to teach truth simply—so as not to confuse the common person—I taught my staff to adopt much of his rhetoric as our own.

For example, defining abortion as an act intended to take the life of an innocent human being is not a popular concept in today’s confused way of thinking. But the pope repeatedly told us what we must believe, act upon, and absorb in our quest to teach others why it is always and in every case wrong to kill an innocent person.

In his 1986 encyclical, Dominum et Vivificantem (On the Holy Spirit in the Life of the Church and the World, section 43), he explains, “The conscience therefore is not an independent and exclusive capacity to decide what is good and what is evil.” Rather, he clarifies, a result of an upright conscience (one that is properly formed in Christ and His teaching) is “first of all, to call good and evil by their proper name.” Obviously, this is contrary to what our culture teaches today: Abortion is merely a political issue, and the cruelty it imposes on children is of no consequence.

An example of this twisted logic is provided by those who have, since my first experience as a pro-life advocate in 1969, persisted in saying, “Abortion may be wrong in your opinion, but that’s all it is—your opinion.” This tortured thought process perfectly exemplifies what Pope John Paul II was talking about when he referred to a conscience that is divorced from the will of God.

For the person whose conscience is guided by the will of God, unquestionably evil is something that can never be intentionally committed. The pope demonstrated this again and again, especially with this remarkable statement in his profoundly inspiring 1993 encyclical, Veritatis Splendor (The Splendor of Truth): “It is always possible that man, as the result of coercion or other circumstances, can be hindered from doing certain good actions; but he can never be hindered from not doing certain actions, especially if he is prepared to die rather than to do evil” (section 52).

Being prepared to die rather than do evil was the hallmark of Pope John Paul’s life, even to the very end. And because he carried this theme forward in so many of his writings, there was no way for me, or anyone else dedicated to the dignity of the human being, to avoid understanding that when God is denied, evil rules. Thus, any accommodation of evil is itself evil.

At the service of the Holy Father

So, it came as no surprise that when Pope John Paul II issued Evangelium Vitae (The Gospel of Life) on the Feast of the Annunciation (March 25) in 1995, American Life League’s staff digested its contents and proceeded to create a set of five study guides, under Father O’Brien’s oversight. They were meant to help people in all walks of life understand the Holy Father’s message, and then use it to restore a culture of life and love for God.

Once this project was completed, what happened in the ensuing months and years is nothing short of amazing.

Pro-life leaders gathered in Rome in October 1995 for a special conference organized to discuss Evangelium Vitae’s impact on the work of the various pro-life movements throughout the world. For me, the conference highlight was a visit to the Pope Paul VI Audience Hall within the walls of Vatican City, where 10 members of American Life League’s staff, accompanied by my husband and me, heard the Holy Father speak.

Upon the completion of his remarks, I made my way to the front of the hall and had a word with His Holiness, and then I presented him with the first copy of our draft study guides on his encyclical, along with a guardian angel lapel pin—the American Life League symbol.

I will never forget that day and the sensation of being showered with the Holy Spirit’s presence when I knelt and then stood by the Holy Father’s side to make the presentation and receive his blessing. I cannot describe it, even after all these years.

In the previous year, friends of the Holy Father—who also happened to be friends of mine—decided that he needed an organization of experts representing all areas of expertise within the pro-life movement. Professor Jerome Lejeune (see our July-August 2012 issue) developed this idea, and Belgium’s Philippe Schepens, MD, (who serves on ALL’s Board of Directors) immediately agreed that the time had come for this group to form.

The Holy Father’s response was enthusiastic, to be sure. One wonders if he knew, at that time, that the very next year he would issue the Gospel of Life and call the Church to create a culture of life out of the darkness that reigned even then.

In 1996, I was invited to become a member of the newly created Pontifical Academy for Life, which shocked me, because I had never thought of myself as being an expert, or important, or worthy of such a great honor. But Father O’Brien was not really surprised, because he had known Karol Wojtyla when he was archbishop and then cardinal of Cracow, Poland, and had maintained a friendship with him during those years.

Father completely understood what a holy man had been elevated to the papacy, and knew that the things this pope said and did would have a lasting effect on the Church. Father explained that my personal faithfulness to Catholic doctrine had simply and finally been recognized. When I signed the academy’s sworn affidavit to be faithful always and in every case to the Church’s teachings, it was a red-letter day in my life.

The power of his presence

Over the next nine years, I was with Pope John Paul II on several occasions, for very private audiences with the Academy members and their families. I vividly recall that as he greeted me, his eyes penetrated the very depths of my soul. I could feel it. His smile radiated what one would imagine is the joy of a great saint, and his desire to bring the world to Christ was unmistakable.

To the end, this Holy Father was committed to spreading the truth in love; exposing evil and its sordid consequences; and most importantly, teaching that there is no human being on the face of this earth who is not precious and loved by God. He wrote, “Man has been given a sublime dignity, based on the intimate bond which unites him to his Creator: in man there shines forth a reflection of God Himself” (Evangelium Vitae, section 34).

If not for his wisdom, I might never have considered the chilling truth of this statement: “While it is true that the taking of life not yet born or in its final stages is sometimes marked by a mistaken sense of altruism and human compassion, it cannot be denied that such a culture of death, taken as a whole, betrays a completely individualistic concept of freedom, which ends up by becoming the freedom of ‘the strong’ against the weak who have no choice but to submit” (Evangelium Vitae, section 19).

Some would evaluate my time with this great pope as mere moments and certainly not worthy of even discussing, but such sentiments really lack appreciation of ; the power of God, which can move one human being through the presence of another—even if that presence is only for a moment.

The last time I saw the Holy Father, he was quite crippled with Parkinson’s disease, and due to its debilitating effects, he could neither rise from his chair nor receive us individually. But I remember looking at him as he sat in his special chair, for we were close enough to hear his words and feel the blessing of his presence in our midst. I recall that, even then, his smile was heavenly, and that is how I will always remember him.

Many of his statements are among my favorite quotations, but perhaps the one that carries the most weight, now that he will be elevated to sainthood on Divine Mercy Sunday (April 27), is what he proclaimed during his 1994 visit to Croatia: “Do not abandon yourselves to despair. We are Easter people and alleluia is our song.”