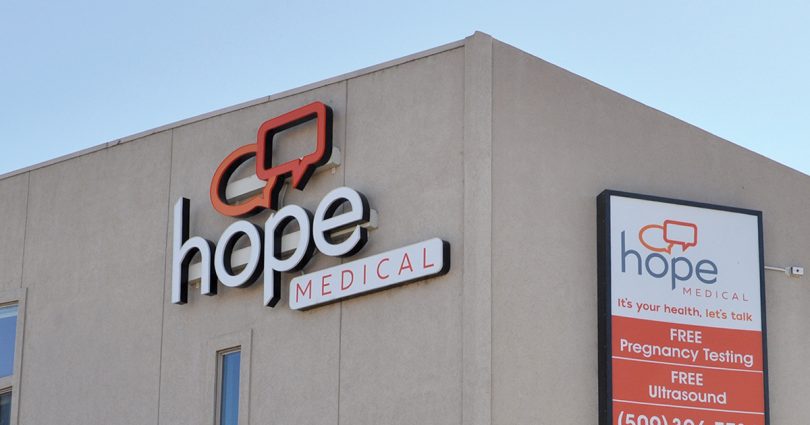 The building has a modern look, with tall windows that lend a celestial feel to the exam room on the first floor and the large conference room directly above. A client recently commented that there was something about the space that reminded her of a church, with its atmosphere of light and peace.

This serene atmosphere works well for the building’s current occupant: Hope Medical of Washington, a pro-life community health center located in the southeastern corner of Washington state. Situated just a block from Planned Parenthood and on a slight uphill grade, Hope Medical looks down on the abortion mill’s gray building and bleak parking lot. Anyone headed for Planned Parenthood must drive directly past Hope Medical and the bold signs announcing its free services. Across the street, a popular drive-through coffee shop draws young people past Hope Medical each day. Some stop in, whether out of curiosity or need, and find a welcoming and life-affirming team ready to assist in any way they can.

Hope Medical provides limited 4D ultrasound and pregnancy testing free of charge and offers a safe haven for women facing difficult or unplanned pregnancies. Caring nurses and advocates follow up with referrals for additional medical care, counseling, and other services. Women who need further support are referred to local agencies such as Prepares for Life, an outreach of the Catholic Bishops of Washington State that offers material and peer support for mothers and children via a network of parish volunteers. Those who would like to space pregnancies without the use of artificial contraceptives can learn about Natural Family Planning at free introductory sessions offered onsite by Columbia Basin FertilityCare Services. Recently, Hope Medical added low-cost STI testing and treatment services for women to its list of offerings.

The hand of God

The story of how Hope Medical came into existence is quite miraculous. Although the clinic opened in 2015, its story began years earlier. The pro-life movement in the Tri-Cities area of Kennewick, Pasco, and Richland had been praying and working to close Planned Parenthood’s abortion facility since it first opened in the 1980s. Local church groups held weekly rosaries and prayer vigils and worked tirelessly to educate the public and offer alternatives to abortion, but little seemed to change over the years.

Then, in 2005, a new movement was born when four people, praying to find a way to end abortion in their community of College Station, Texas, were inspired to pray, fast, and keep vigil at the local Planned Parenthood for 40 days and 40 nights. At the same time, they organized a campaign of education and outreach to spread the truth about abortion. They called the prayer campaign 40 Days for Life. The movement spread quickly, and by early 2008 it had grown to include over 60 locations nationwide.

News of this prayer movement reached our local pro-life groups, a team gathered, and the first 40 Days for Life campaign in the Tri-Cities area kicked off in the fall of 2008. Volunteers stepped up to cover every hour—praying, fasting, and distributing information. We felt sure this campaign, which seemed to fulfill the call for a “great prayer for life” made by Saint John Paul II in The Gospel of Life, would overcome the evil of abortion in our community and would force the doors of Planned Parenthood to close (EV, 100).

Instead, at the end of that fervent prayer vigil in November 2008, we saw the election of an extremely pro-abortion administration to the White House. The next few years brought multiple 40 Days for Life campaigns each spring and fall, but also multiple disappointments. The new healthcare law was enacted with its accompanying HHS mandate requiring insurers to provide contraceptives, abortifacients, and sterilization; taxpayer dollars continued to flow to Planned Parenthood; and religious liberty and freedom of conscience faced new challenges. In addition, despite our efforts, our prayer campaigns seemed to be diminishing. Our vigils were now 12 hours each day instead of 24, with fewer participants to man the sidewalks in front of Planned Parenthood. Yet we persisted under several different leaders until finally, in 2011, we had no fall campaign.

After the skipped campaign, Winnie Zeamer, one of our team members who had been praying for a new leader to step up, decided to lead the next one “just until another leader is found,” as she often said. She believed that, despite its smaller numbers, 40 Days for Life was making a difference.

As we kept vigil over the next few years, the nearby building that is now Hope Medical changed hands several times. In the winter of 2014, the building was again vacant and up for sale. Though several members of our pro-life group imagined it as the perfect location for a pregnancy center, purchasing a building seemed like an impossible dream.

Then, in February 2015, one of our team members read a post in a Catholic Moms Facebook group. A local Natural Family Planning counselor named Shira Wise mentioned that she had just formed a 501(c)(3) for her NaPro technology business, Three Rivers Fertility Care. Shira had also noticed the vacant building and felt it would be an ideal place for a pregnancy resource center. She asked the group for feedback and received enthusiastic encouragement.

It was then that we realized that God had opened a door for our dream to come true. We joined forces with Shira, inviting her to present her idea at the 40 Days for Life kick-off rally. She quickly set the idea in motion, holding informational meetings at her church and networking with her many contacts. An online fundraiser was organized. The 40 Days team spread the news via our e-mail list and Facebook page. A press release published by Catholic Online brought donations from as far away as Singapore. The local pro-life community responded swiftly and generously with donations. In less than six weeks, nearly $300,000 was raised, a bid was made, the auction won, and the building belonged to Three Rivers Fertility Care.

Providentially, Nick and Cherie Childers, a pro-life couple from Reno, Nevada, had recently moved to the area. Cherie, a labor and delivery nurse whose path had led her to volunteer at pro-life pregnancy centers both in Reno and in the Tri-Cities area, had recently joined the 40 Days for Life prayer campaign and heard about Shira’s efforts. Cherie and Shira met, soon discovering that Cherie’s vision of a medical model pregnancy center fit perfectly with Shira’s hopes for the building. Cherie agreed to design a business plan for the new center. A board of directors was assembled, a 501(c)(3) was formed, and the dream took shape.

Throughout the next few months, volunteers helped renovate the space to accommodate Hope Medical, a local Knights of Columbus council donated a state-of-the-art ultrasound machine, and volunteers were trained and prepared to receive new clients. When Shira Wise and her family later moved out of state, she handed the building to Hope Medical, having completed the task God put before her. The opening date was set for December 12, 2015, the Feast of Our Lady of Guadalupe, the Patroness of Unborn Children.

Since that day, many women have found help and support through Hope Medical, often returning with their children to thank the volunteers and staff. Sadly, the doors of Planned Parenthood remain open, so our 40 Days for Life prayer campaigns continue. Winnie Zeamer has faithfully led 13 campaigns while waiting for that “other leader” to show up. Under her leadership, the 40 Days team has grown stronger, drawing participants from local Catholic parishes and from many Protestant churches.

Just recently, a young pro-life couple, Kellen and Casey Belew, active on the 40 Days team since 2015, stepped up to lead the fall 2018 campaign. When Casey first became involved in 40 Days for Life, she recalls wanting “to do more than just pray,” but now she says, “I have come to believe that prayer is the heart of the pro-life movement.”

Sometimes, we wonder why our prayers don’t seem to be answered, but God’s ways are not our ways. If this abortion mill had closed, our prayers might have ended, and women would just be sent to the nearest Planned Parenthood. But God had a plan for us, one that fulfilled our dream of a pro-life pregnancy center and brought hope to many women. We have other dreams: for all Planned Parenthood abortion mills to be permanently closed; for all women to be offered true support for pregnancies, planned or unplanned; and for all children to be welcomed, loved, and protected. We want to see that gray brick building, where so much death has occurred, demolished and replaced with a memorial garden dedicated to all innocent victims of abortion. We dream of living in a world where abortion is not only illegal, but unthinkable.

Someday that will happen. We must believe that, and we must never give up. Pray, hope, and trust! Some dreams may seem impossible, but with God all things are possible. Miracles really do happen!

To learn more about the 40 Days for Life prayer campaign, visit 40daysforlife.com.

To be a part of Hope Medical of Washington’s mission, visit hopemedicalwa.com/support-us.

To find a pregnancy center near you, visit care-net.org or heartbeatinternational.org.

To learn more about organizations that provide assistance for women and babies, visit Birthright at birthright.org/en and Prepares for Life at preparesforlife.org.