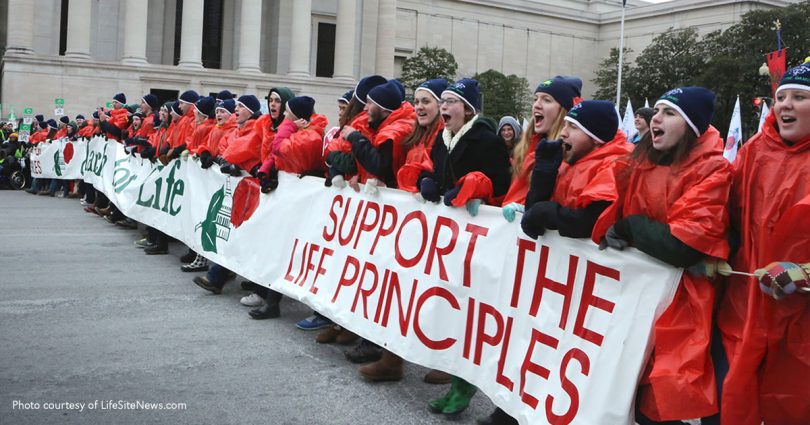 It’s the “largest and longest annual gathering in the history of the United States,” according to Conservapedia (an online encyclopedia). Each year, after a noon rally on Washington, DC’s National Mall, hundreds of thousands of people—most in their teens and twenties—march from the mall up Constitution Avenue and then to the Supreme Court building on Capitol Hill. Major downtown streets are closed from 9:30 a.m. to 6 p.m.—almost five hours after the event is scheduled to start. And the city’s population swells considerably for a few days.

The new face of the pro-life movement

On January 25, 2013, a record half million marchers gathered for the 40th consecutive March for Life, which marked the 40th anniversary of the Supreme Court’s rulings of January 22, 1973, on Roe v. Wade and its companion case, Doe v. Bolton. These decisions decriminalized abortion on demand throughout pregnancy for any reason.

March participants hailed from schools, churches, and communities nationwide. “The massive amount of people who are actually standing up for something is just inspiring,” said sophomore Annamarie Duty of St. Gregory’s University in Shawnee, Oklahoma. She and other college students from across Oklahoma took a 48-hour bus trip to get to the march. Abortion is deeply important and very personal to the college-age demographic. “There are a lot of young people here,” Annamarie observed. “We’re the future. We’re the people out there arguing; we’re the people going to the clinics.”

The March for Life organizers know this. That’s why they asked 19-year-old Ruben Verastigui to speak at this year’s March for Life rally. He’s the president of the Students for Life chapter at Northwest Vista College in San Antonio, Texas. Ruben appealed to his peers, asking, “How many of us are missing brothers, sisters, cousins, friends because of abortion? . . . We know what abortion is. We’ve seen the procedures, we’ve seen the graphic images, and we have seen our brothers and sisters through ultrasounds.”

The teens and young adults who attend the march each year don’t go because they are forced to, or because they’re brainwashed into an “anti-abortion mentality” by their churches. They march because of personal conviction. “People think just because we are young, we don’t know what we’re talking about, but it’s time that we show people that we do know what we’re talking about, and we will not be silenced,” Ruben said emphatically and later added, “We have to remember we’re not the future of the pro-life movement; we are the pro-life movement.”

The pro-life voice on campus

The college students who participate in the March for Life are also activists on their campuses’ intellectual and cultural fronts. Sins against life and human dignity are grossly underreported and misrepresented by mass media. Many people are “pro-choice” based on legality and misconceptions about what is actually involved in abortion and euthanasia. This is true on college campuses as well. St. Gregory’s University junior Gabriela Weigel said, “Right now, we prepare ourselves because that’s what college is: preparing yourself. It is the most opportune time to prepare yourself for the pro-life movement. It’s a perfect place to engage with people in conversation.” Understanding and being able to explain the pro-life position is an invaluable tool for changing the way people view the sanctity of life.

Conversation seems to be the key to this evangelization. “For the Pro-Life Team at school, we have T-shirts, and I wear that shirt on a regular basis,” Annamarie explained. “People ask me, ‘Why are you pro-life?’ I’ll take any opportunity and do my best to answer it and say, ‘This is what I believe. This is why I believe it. This is why I’m doing this. This is why I’m pro-life.’” The ideas and opinions she shares are different than those typically presented by mass media. “Hopefully,” she added, “one thing I say will resonate in their minds and make them think.”

The March for Life sees many of the same faces every year. Many of these participants grew up with the march, and the pro-life cause is an integral part of their lives. “When I was younger, I knew the march was important, but I didn’t understand it well,” said 18-year-old Hannah Whitman, a native of New Jersey. She has marched with her family every year since age six.

And many people do just that in the last week of every January. “One of the good things about having the march in the middle of winter is the sacrifice,” St. Gregory’s sophomore Joshua Alexander pointed out. “When we’re out in the middle of the cold and it starts snowing on us, every step that we take is an act of reparation. We have to make reparation for the 55 million children who have been aborted.  Not only that, but the 55 million mothers and the 55 million fathers.1 What better place to do it than in the midst of hundreds of thousands of people?”

Understanding the power of spiritual reparation is central to understanding the march. People don’t march because it’s easy or just because they want to. They march for change. “I don’t think there’s any other way around it,” he continued. “If we’re going to make a difference—if we expect anything to change, we have to change within ourselves. We ourselves have to be transformed into the living Christ. If we change, then we have an opportunity to reach out to these people. By our very presence, we can change them—not necessarily by our words, but by the way we live.”

A sense of unity and hope

“Right now, even though as the pro-life movement, we are in the middle of this winter and it doesn’t seem like it’s going to end, with spring there is such hope,” said Joshua. This hope is shared by all those marching, from Atheists for Life to students from numerous Catholic colleges to groups of Jews, Orthodox Christians, and Protestants. “Having the Orthodox bishop standing next to our own [Catholic] bishop, having the metropolitan next to the cardinal was such an awesome hope to me,” he commented. “When you are united, you are strong. We need that strength. We have to be united.”

The sense of unity and community is very strong at the March for Life, even though its participants come from all over the United States and foreign countries as well. At the same time, many other pro-lifers march, demonstrate, or hold vigils in their own communities. Moreover, Hannah pointed out, “A lot of people, if they can’t go [to Washington, DC], they’ll pray for the people marching.”

The pro-life movement in America is young, tireless, and determined. Ruben ended his speech at the rally by declaring, “As the pro-abortion movement gets older and older, fearing that they might lose, the pro-life movement gets younger. We are winning this battle, and we will continue to fight until abortion is abolished. . . . Everything is possible with God.”

This sentiment was echoed throughout the entire week of the March for Life as young pro-life Americans poured into the nation’s capital. They didn’t just march; they talked to their members of Congress, attended leadership conferences, visited national monuments, and learned about the influence they can have on their country. “People like this will one day take office,” Joshua  observed. “What a thought—that one day we might have a pro-life president with a pro-life cabinet, and pro-life judges from this group!”

The march’s growth each year means that these young people are bound to make an impact. “At first, you might see a few people,” Annamarie reported. “Then more people add on. Then more and more, and it builds and builds until you can’t ignore the numbers anymore. . . . Yeah, there’s a ton of abortions every day, but when you see how many people are standing up against it, those [pro-lifers] outnumber them [abortion advocates], and we’ll just tip the scale. I know we will.”

1 This estimate reflects surgical and medical abortions only. Many more babies are aborted as a result of abortifacient contraception, in vitro fertilization procedures, and embryo-destructive laboratory research.—Editor

SIDEBAR: How to evangelize for life on campus

The March for Life is not a stand-alone event. It reflects a massive nationwide movement, and it’s the culmination of grassroots pro-life activism. So, how can pro-life college students be activists on campus?

1.    Education: The first step in promoting the pro-life message is educating yourself so that you know what your message means. The next step is to promote it: Set up informative displays on campus, participate in national events such as the Pro-Life Day of Silent Solidarity, host a speaker, or ask your group to wear pro-life T-shirts on a designated day each week.

2.    Prayer: Public prayer is the most important way to reach out to the general public and has played a crucial role in the pro-life movement. Participating in organized prayer events such as 40 Days for Life and other pro-life prayer activities and vigils can be very beneficial both for a campus pro-life group and the local community. [Editor’s note: See STOPP.org to learn how to bring Jesus to Planned Parenthood through Mary.]

3.    Ministry: Ultimately, the pro-life movement is about ministering to those threatened or affected by abortion and other attacks on the right to life. Campus pro-life groups can sponsor sidewalk counselor training or host a baby shower for a local pregnancy center. The group as a whole or its individual members can also reach out to women and men on college campuses who are suffering from post-abortion trauma.

4.    Community: By developing a strong community both within your pro-life group and across campus, you create a support system so that those who need help or have questions know where to turn.

5.    Career choice: “You can be involved in the pro-life movement in any way, shape or form,” said Gabriela (see main article). “Through the career choices that you make, . . . you can always find a way to impact someone.” As you choose and prepare for a career, think of the avenues it might offer to spread the pro-life message.

Lauren E. Mach is from North Texas and is currently a sophomore at St. Gregory’s University in Shawnee, Oklahoma. She is majoring in philosophy, communication, and psychology, and also serves as events chair for the SGU Pro-Life Team. Lauren won first place in American Life League’s National Pro-Life T-Shirt essay competition last year (see “How to Reverse the Culture of Death” in our July-August 2012 issue). She has attended the March for Life three times, including this year’s march.