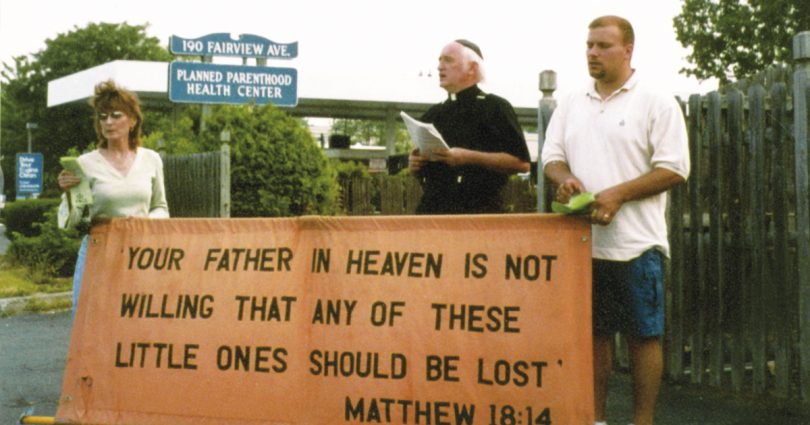 Taking to the sidewalks at abortion clinics in public prayer and witness walks the line between what society thinks acceptable and fanatical. We who do so know the reactions it elicits: Obscenities, scorn, sarcasm and attacks with anything from coffee to snowballs are outweighed by random acts of kindness—gifts of hot chocolate on a subzero day, bottled water on a sizzler, prayers, thanks and curbside praise music from a car radio.

However, the women who change their minds and leave abortionists with time rather than blood on their hands are priceless. Later, they return with their babies to thank us; usually saying something like, “He’s the light of my life and he wouldn’t be here if you weren’t here praying outside this place a year ago.” In the words of a priest sidewalk witness, “That is what brings the angels to their feet cheering.”

The flagship of abortion

It is a new realization to me that abortion clinics are the front lines of the culture wars and so is my acknowledgement that such a war exists. Only within the last few of my 50-plus years did I abandon hedonism and return to orthodox Catholicism. My dramatic conversion brought about choice reactions from my family, friends and former bed-mates. They resorted to biblical lexicon in labeling me a Pharisee and hypocrite. They filed me away as self-righteous and sanctimonious. I was “prostituting” myself by “wasting” my talents writing for pro-life web sites and publications. At best, they gave me a patronizing pat on the head and an insipid, “How nice for you.”

I felt misfit and odd. After expressing their opinions, they asked no questions. They did not want to invite unfamiliar dialog from the former mouthpiece of permissiveness and tolerance. I do not blame them. I had difficulty finding footing with myself. TV shows and movies once entertaining were suddenly vulgar—hobbies and secular interests were boring.

On the other hand, I did not fit the profile of a sign-carrying pro-lifer. I have no children nor do I have maternal feelings. I never have been comfortable holding a baby. Why then did I leave the self-gratifying culture to stand on the streets as a fool for Christ?

Throughout an adventurous and mercurial life, I accumulated impressive accolades and equally impressive scars. But I had no meaningful channels of expression and no stable focus of devotion. My soul was worn and tired. Family relations were guarded and superficial, friendships stale, sexual exploits passé and jobs unsatisfying.

Choices I had made stood in a precarious serpentine line like dominos on unleveled ground. In a slow-motion cascade of defeat and disillusionment, they began to fall—romances, marriages, unwise career decisions, imprudent financial moves, spiritual wanderlust and ideological gymnastics. One clicked against the other, the weight of those fallen took down the next in turn.

Tottering on the shifting sands of recovery, I found myself on the sidewalk in front of an abortion mill singing hymns and reciting scripture. I felt conspicuous and fraudulent. Abortion was not my fight. And public displays of religious convictions, especially controversial ones, were not my style.

Yet I kept coming back because I was sure of two things. First, something critical was going on in the temporal and spiritual worlds at those slaughterhouses. Second, I was standing on solid ground. Within months I was impassioned by the battle for the preborn. Praying at those killing places is not about abortion only. Abortion is the lightening rod that draws to itself and catalyzes the war between God and Satan.

It is the flagship for a whole fleet of disgrace, abuse, sacrilege and lies. It is crystallized in a Planned Parenthood billboard: “Birth control—it makes all my other choices possible,” indicating education, career and timing of childbearing within or outside of marriage. But birth control also makes possible promiscuity, cohabitation, adultery, the breakdown of the natural family, pornography and sexual addictions. All these lead to committing and/or supporting abortion.

I have walked some of those paths and since I was healed I know there is hope for all. There is hope for women and men contracepting their way to broken hearts, families and lives. There is hope for mothers sacrificing the lives of their children, for the fathers abandoning their babies to death and for grandparents sanctioning the murder of their grandchildren.

I pray at abortion clinics because, amid violence and confusion, I am surrounded by celestial angels and saints who meet in a powerful convergence of grace. I pray because those with whom I stand are sustenance and fortification surpassed only by my Lord Himself, Who resides in the Eucharist. I am compelled to bear witness to the power of the Holy Spirit in them. As I am healed, I become an instrument of healing.

I am working out my salvation in fear and trembling in the venue most appropriate to my sins, on the streets of the culture of death. To those who accuse me of being self-righteous, sanctimonious and severe, I say they misjudge me. To those who verbally assault me and mock my God, I say that they do not know what they are doing. The world hated Jesus first; now it is my turn to be hated, but with the strength of His Spirit, I stand like another witness:

It is a trustworthy statement, deserving full acceptance, that Christ Jesus came into the world to save sinners, among whom I am foremost of all. Yet for this reason I found mercy, so that in me as the foremost, Jesus Christ might demonstrate His perfect patience as an example for those who would believe in Him for eternal life. (1 Timothy 1:15-16)

Elizabeth Lynch is a freelance writer from Ilion, New York.