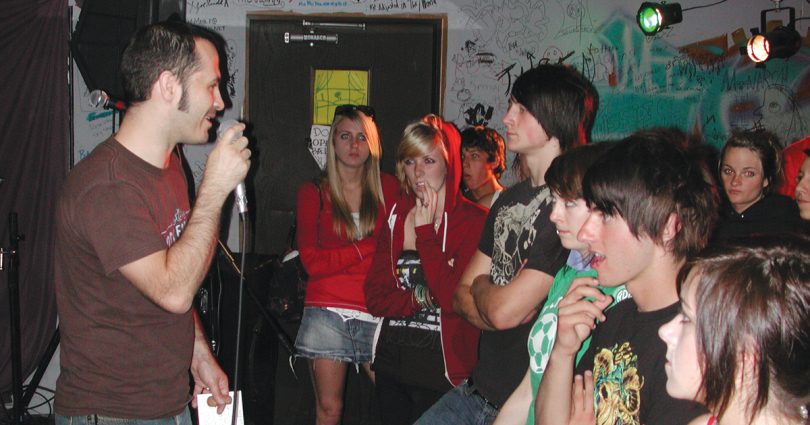 By the time you read this article, the Rock for Life Summer Tour 2007 will be coming to an end. Between Memorial Day and Labor Day, there is a Christian music festival somewhere in America every weekend—each drawing thousands of people, most of whom are young adults. Creation, the nation’s largest Christian music festival, can draw up to 100,000 people.

At Rock for Life we believe that people, especially the young, are naturally pro-life. So we go to them, engage them and draw them to the beautiful truth that every human life should be valued and protected. In turn, we motivate them into action on behalf of their most vulnerable brothers and sisters, the preborn. And since most campuses are closed to us, it makes sense to take our message to as many wide-open Christian music festivals as possible.

Each festival means working long hours, breathing in dirty dust, sleep deprivation and camping— even losing one’s voice and getting ticks. Yes, that’s right. The first night I stayed at a festival this summer, one of those gross things attached itself to my leg and I had to gently pry out that sucker—pun fully intended.

All of this is well worth it. While many from the “Summer of Love” generation still embrace the free sex and me-first attitude that led to abortion on demand, I have great faith in our young people. They are our hope.

We’ve known for years that young adults and teens are the biggest group of pro-life Americans. In 2003, the Gallup organization found that 72 percent of polled Americans aged 13-17 believed abortion is immoral and 32 percent believed that abortion should be illegal in every case.

If that isn’t enough to rejoice in the fruits of our labor, then check this out: A study by Overbrook Research has shown a major turnaround among young adults aged 18-29. CNS News reported that Overbrook surveyed 30,000 young adults from Missouri because its “proportions of blacks, Catholics and union members” is “highly representative of the American electorate.”

In 1992, Overbrook found that 39 percent of those under 30 were “the most ardently ‘pro-choice’ and the least likely to be strongly ‘prolife’ (23 percent).”

Since educating Americans about the personhood of preborn babies is the key to saving lives, we decided to focus on three topics: the humanity of the child, the deadly deeds of Planned Parenthood and killer birth control pills.

With the addition of our 4-D ultrasound imagery DVD Baby Steps to our educational arsenal, we have been able to show more young people that the child in the womb is just that—a child! Combining this with our graphic pictures and videos of abortions we now have the one-two punch that moves the uneducated into the well-informed camp, as demonstrated by the following encounters:

• Five high school girls from eastern Pennsylvania stopped to watch Baby Steps and were so shocked by the rapid growth of a person inside the womb that they grabbed every piece of literature we had, promising to read it and spread the information in their school. They also signed up for Rock for Life’s Street Team and decided that they could easily commit to doing one prolife action each month.

• A mother brought her three children (one in high school, two in elementary) to watch the Baby Steps DVD. While the three children watched in amazement, the mother broke down in tears and later told us that she had aborted her first child at approximately 10 weeks. We consoled her and told her about the Rachel’s Vineyard postabortion healing programs.

• Another young woman spent well over an hour at the booth trying to decide which resources to purchase while educating her children on fetal development with Baby Steps and our fetal models. She also showed them the truth about abortion with our graphic image notebook.

The more I learn about Planned Parenthood, the more I am convinced that we have to expose this organization and its pro-promiscuity message. Fortunately, I share office space with some of the best minds working to defeat the Planned Parenthood agenda.

At each event, our exhibit features a dry-erase board where we write a new fight-Planned Parenthood message every day—and our focus has been met with great enthusiasm. Several pastors and youth leaders promised to learn more and then educate their congregations. We also recruited hundreds of new Rock for Life Street Team members, each committed to passing out literature, spreading the word on Planned Parenthood and/or creatively using their MySpace or Facebook blogs to disseminate information.

One of the most interesting conversations we had was with a young lady who read our display board. It showed that Planned Parenthood performs 5,095 abor tions each week, the amount of tax dollars it receives and the amount of profits it makes each year. She declared that those numbers were all lies. She also claimed that Planned Parenthood doesn’t perform abortions and said she should know because she works there. Little did she know that the numbers come from Planned Parenthood’s own reports. She was given my name and contact information, but I have a hunch she won’t be calling me anytime soon.

We also focus on birth control pills. You’d be surprised how many young women at Christian festivals say they use these pills and other chemical abortion devices. Since most are unfamiliar with the abortive nature of these drugs, we educate them. In fact, many of the young women we meet say they’ll share our educational brochures and articles with their friends. Finally, discussion on the pill gives us the opportunity to talk to youth about the meaning of chastity and marriage.

Interesting conversations always happen at the Rock for Life booth. One day two teenage girls came up to argue for abortion in “cases like when the girl is poor or when she is raped.” They left with changed minds, realizing that defending the preborn in one instance demands that the preborn be defended in all cases. Just as it is a ridiculous notion to free some slaves and not others, so is fighting only for the lives of the preborn who are conceived by well-off women in perfect and loving relationships.

We also had a long conversation with a young woman who disagreed with our “Abortion: America’s Hidden Holocaust” T-shirt. After 20 minutes of discourse, she acknowledged that her own understanding of what “holocaust” and “genocide” meant was off-base.

A middle-aged woman came to the booth and was shocked to see our Gardasil vaccine exposé in the May-June issue of American Life League’s magazine Celebrate Life. In her desire to prevent cervical cancer, she had just received the first shot and was visibly shaken that her doctor gave it to her. Numerous others were disturbed by another Gardasil exposé in the July-August issue of Celebrate Life. It revealed that some girls died after the vaccine and other recipients who became pregnant after the vaccine had children with birth defects.

Many people approached the booth and opened the folder of abortion pictures. All of them were shocked and appalled at what they saw. One young man at the Ichthus Festival came to the booth with a pro-abortion view, but when he looked at the reality of abortion as displayed in the folder, he immediately changed his mind.

Education is our primary goal, but we are also recruiting lots of young people to the pro-life cause. Thousands are signing the Stop Planned Parenthood Tax Funding petition. Many of those young people are joining the Rock for Life Street Team and even considering starting a Rock for Life chapter and affiliating their pro-life campus group with us.

There is much more taking place than I can cover in this space. If you are interested in hearing more, subscribe to our weekly e-mail blast, the Rock for Life Report, at www.RockForLife.org.

I hope you’ve enjoyed reading about our summer. Every challenge has been surpassed by greater rewards of seeing people accept the truth. Therefore, we shall continue fighting the good fight until our culture honors, respects and protects every human life—born and preborn.