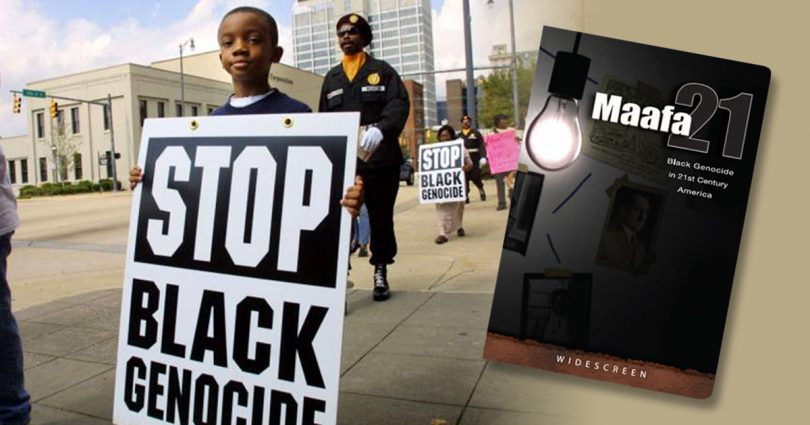 This quote from Supreme Court Justice Ruth Bader Ginsburg, published in the New York Times (July 7, 2009), unintentionally sent the proabortion movement into overtime damage control. As a leader of the “women’s rights” movement since at least the 1970s and now one of the most powerful women in the U.S. government, Ginsburg had just admitted to the nation’s best-known daily newspaper that the Supreme Court’s Roe v. Wade decision (1973), which decriminalized abortion, was about getting rid of populations “that we don’t want too many of.”

Hmmm … Whom could she mean? queried the blogosphere in hushed and not-so-hushed tones.

The slipup came less than a month after the documentary Maafa 21: Black Genocide in 21st Century America was released-last year, on Juneteenth, a holiday commemorating June 19, 1865, when Union troops finally arrived in Texas to enforce the Emancipation Proclamation, issued by President Lincoln in 1863. I was privileged to sit in an auditorium in the Capitol Visitor Center, across the street from the Supreme Court building in Washington, D.C., for the premiere. As a young white woman from the upper Midwest, I wondered if I could even relate to this story of eugenics, abortion and the African-American community. But two hours later, I was reeling between anger, disgust and tears. Maafa 21 isn’t just a story for black pro-lifers; it’s the story of how we got saddled with a society that aggressively violates the human rights of “populations we don’t want to have too many of” and justifies all sorts of atrocities in the name of some “greater good.”

Maafa, a Swahili term meaning great tragedy or disaster, refers to the over 500 years of oppression suffered by Africans and their descendants under slavery, colonialism, imperialism, racism, and–as Maafa 21 proves–eugenic birth control and abortion. In the year since the film was released, it has lit the country on fire, and inspired a new wave of activism and passion for justice, giving birth, if you will, to a movement that views abortion and other attacks on human beings’ lives not as a parallel to slavery and racism, but as their direct continuation.

A sure sign that the abortion industry is beginning to feel threatened by Maafa 21’s impact is the fact that leading establishment news outlets (always reliable as pro-abortion mouthpieces) have recently published articles on black pro-life activism that were clearly intended as damage control. The New York Times (“To Court Blacks, Foes of Abortion Make Racial Case,” February 27) and ABCNews.com (“Abortion Billboards: Strong Words Spark Debate in Atlanta’s Black Neighborhoods,” February 22) are two such examples.

I spoke with Mark Crutcher, Maafa 21’s writer and director, and contributors Connie Eller and Reverend Doctor Johnny Hunter about the documentary’s impact a year after its release.

Permission to be pro-life

To date, over 15,000 copies of Maafa 21 have been sold. Crutcher is a longtime pro-life activist, and the founder and president of Life Dynamics Incorporated. He reported that viewers’ typical response to Maafa 21 is anger and went on to say,

We have people crying in every audience; we have people overcome. In churches and theaters, people will call and say, “I always knew the pro-life position was the better position, but I never felt motivated to do anything about it.” So many people in this culture feel they were sold a bill of goods, that [they were told] the motivation behind abortion was women’s rights … but when they see Maafa 21 and irrefutable proof that the motivation was not women’s rights, but eugenics, it gives them permission to be pro-life.

One of the film’s most startling effects is the support it has drawn from diverse populations that are typically pro-abortion strongholds. “Usually, the most we can hope for is to win over the neutral or ambivalent, but winning over people who are hard-core or ‘pro-choice’ didn’t happen; [however,] we’re seeing that [happen] with Maafa,” Crutcher continued. A prime example of this phenomenon is what occurred at the annual Bridge Crossing Jubilee in Selma, Alabama, held March 4th to 13th of this year.

In the Selma spotlight

In many ways, events in Selma in 1965 marked both the emotional high point and the turning point of the African-American civil rights movement. Three marches took place there to protest discriminatory voting practices. The first, held on March 7, is known as Bloody Sunday because 600 peaceful marchers were violently attacked by police as they attempted to cross the Edmund Pettus Bridge en route to Montgomery, the state capital. It was followed by a second (and partial, but peaceful) march on March 9, and a third march successfully and peacefully reached Montgomery on March 25. On August 6, President Lyndon Johnson signed the Voting Rights Act of 1965, which banned measures such as poll taxes and literacy tests, which had been used to prevent racial minorities from voting.

In 1993, the first jubilee was held in Selma to commemorate these events. Since then, the Bridge Crossing Jubilee has grown in popularity, now attracting over 50,000 annual visitors and including a film festival. In 2010, Maafa 21 was a featured film—an incredible nod to the work of Crutcher and his team in exposing the continuation of black genocide in America.

Connie Eller, founder and president of Missouri Blacks for Life, was a researcher for the film, in which she was also interviewed. She said that seeing her work in Selma was an unforgettable experience:

I grew up watching the footage every year on the civil rights marches. It is part of my culture and part of my heart. For us to gather and cross that same bridge freely meant a whole lot to me. Maafa 21 was made by Christians, but God used it to talk to people and wake them up, and let them know that their efforts weren’t in vain and still aren’t—even when we may feel like we’re losing.

Dr. Hunter, founder and national director of the Life Education and Resource Network, and Rev. Stephen Broden, pastor of Fair Park Bible Fellowship in Dallas, Texas, are both long-time leaders in the black pro-life movement. They were the first to convince Crutcher that he needed to document on film the evidence he had collected on the contraception and abortion movement’s eugenic roots. “We’ve always been concerned that abortion was parallel to slavery,” Dr. Hunter pointed out, but through their discussions with Crutcher, “we realized that this is not parallel—we’re dealing with the exact same fight.”

Dr. Hunter and Rev. Broden played a key role in the effort to engage the black Christian community and the network of pastors who now preach Maafa 21 from the pulpits. In the same way that the civil rights movement’s message of the 1950s and 1960s was boomed into the nation’s conscience through the churches, Maafa 21 is awaking a sleeping giant of newfound anger at abortion as the most egregious form of racism, injustice and human rights violation.

“Pastors are on fire,” said Dr. Hunter, his message inspired by the Old Testament. “You are not allowed to look the other way, and it is the same Scripture that warns you are not to kill the innocent. This is a battle you have to be in.”

Eugenics is a particularly ugly word. It evokes thoughts of mass murder committed in the name of racial purity. It’s usually spoken in the same breath with references to Adolf Hitler’s Nazi regime. But seldom is it applied to Margaret Sanger, Planned Parenthood foundress and unabashed eugenics promoter, and even less to Ginsburg, who is routinely fawned over as “progressive” by secular humanists.

“God times things in the way He wants them,” Crutcher observed. “And that was crystal clear when Ruth Bader Ginsburg [less than a month after Maafa 21’s premiere] comes out and says everything we’re saying is true … The day I saw that, I saw God’s hand in this thing every inch of the way. This [film] is the tool we’ve been waiting for, for a long time.”

SIDEBAR: Genocide by the numbers

Table 3 of National Vital Statistics Reports, Volume 58, Number 4 (October 14,2009, available at www.cdc.gov) reports that in 2005, there were 587,000 live births versus 452,000 abortions of black preborn babies. According to Table F of NVSR, Volume 58, Number 8 (December 23, 2009), in 2005, there were 292,808 deaths in the African-American community from causes other than abortion. In his June 14 online column, Conflict of Interest, Walter B. Hoye II (see Celebrate Life, July-August 2009), CEO of the California Civil Rights Foundation (CivilRightsFoundation.org), pointed out that these figures reveal there was a “black life deficit” of 157,808 in 2005, and his calculation doesn’t include the 177,000 black preborn babies who died in 2005 from causes other than induced abortion.

According to the Guttmacher Institute’s May 2010 Facts on Induced Abortion in the United States (see Guttmacher.org), “Thirty percent of abortions occur to non-Hispanic black women.”

Keep in mind that 1) the 2000 census indicated that only about 12 percent of the U.S. population is African-American, compared to about 75 percent for the white population (including Hispanics) and about 12 percent for other racial categories (see Overview of Race and Hispanic Origin, a Census 2000 Brief issued in March 2001, at Census.gov); and 2) these abortion statistics don’t reflect the fact that hormonal contraceptives can cause very early (and undetected) abortions.
According to the Klan Parenthood web site, “Since 1973, abortion has reduced the [U.S.] black population by over 25 percent.” For more information, visit ALL.org, STOPP.org, LearnINC.org, BlackGenocide.org or KlannedParenthood.com.