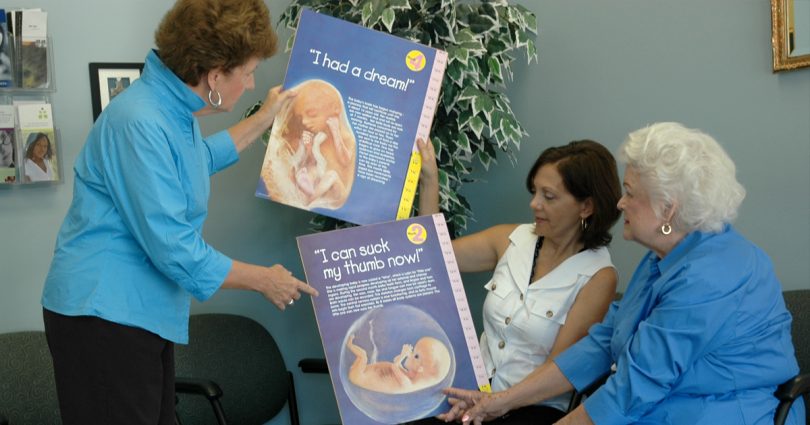 People of faith generally recognize that the impossible can be accomplished through the power of prayer. In trying times, they are always looking for deeper forms of prayer to inspire the needed human actions. This is a vital part of pro-life organizing.

Thus, Laity for Life, based in Naples, Florida, was initiated on December 8, 2005, the Solemnity of the Immaculate Conception, as a volunteer lay organization established to provide spiritual support for Catholic pro-life activists nationwide. Inspired by Pope John Paul II’s statement to the late Rev. Paul Marx (see the related article in this issue) that spreading the pro-life message is “the most important work on earth,” this apostolate promotes the celebration of Mass for those involved in pro-life work and the success of their efforts, and encourages financial support of the pro-life movement. In the future, LFL hopes to provide pro-life speaker training as well.

LFL’s board chairman, Kathleen Sullivan, has a warrior’s attitude and an apostle’s heart. It has long been said that if you can be mentored by this lady, you will also be motivated. Sullivan was appointed to President Reagan’s Family Policy Board in 1980 and, for 28 years, promoted abstinence. She cofounded LFL with Patricia Bucalo, LFL’s board president. Bucalo has spent years in the pro-life movement at the local level, including serving on the board of a crisis pregnancy center and helping to lead efforts to organize sidewalk prayer demonstrations recently started outside the Naples Planned Parenthood facility, which began committing abortions last year.

Through private prayer, both women had discerned that success in the pro-life movement does not begin in the political arena, although it may also require political success. It begins through the grace of Almighty God. And what better way to activate that grace than through the power of the holy sacrifice of the Mass? This is a very simple yet powerful concept. “The Mass is also at the very core of the pro-life movement, since it is Christ giving His body and blood, soul and divinity for the world—the definitive victory over evil,” says Rev. Thomas Euteneuer, a member of LFL’s Advisory Council. “As the body and blood of innocent children are being sacrificed each day on the altar of abortion, we unite ourselves with the prayer of Christ for an end to this great evil and for the conversion of all who participate in it.”

Involvement in LFL is as easy as arranging for one or more Masses in your area. Then notify LFL of the Mass location, date and time. The suggested Mass intention is “for the pro-life movement and all those serving in it.” To date, Masses have been offered in 22 states, and in Germany, Guatemala and India, all for the courage, strength, perseverance and peace of pro-life activists—and for the ultimate triumph of Christ’s kingdom through their pro-life work.

This year, in which a crucial midterm election will take place, LFL is also focused on what it has dubbed “the politician project.” It was born in early 2008, with a tiny handful of Masses offered in the home dioceses of pro-abortion powerhouses such as Kathleen Sebelius, secretary of Health and Human Services, and House Speaker Nancy Pelosi. “We know that God’s precious gift of human life is as inviolable as ever,” Bucalo said. “We trust that the sanctifying grace of the Eucharist will overcome the evil of abortion, no matter what political powers are straining to promote it.”

LFL’s Board of Directors has identified key areas of the country to seed with Masses offered for the intention that politicians and other government officials will courageously support the right to life of all human beings, born and preborn. The board hopes that everyone who has been praying for a change of heart in their elected representatives—particularly those currently represented by pro-abortion “Catholic” politicians—will arrange for Masses to be offered in their own diocese, state capital or Washington, D.C. The suggested Mass intention is “for the courageous support of human life by all elected officials.” Contact LFL or visit its web site for a current list of politicians and contact information for their home dioceses.

In the Diocese of Venice, where LFL originated, the graces have been raining down. “I’m not only blessed [by being able] to help promote the Masses,” explained board vice president Lucia Barone, “but also by wearing another hat as board member for a nonprofit organization that operates two pregnancy centers in Southwest Florida. It’s almost like I can see a direct correlation between when Laity for Life started and good things happening locally,” she observed. “In the last two years, we have been blessed by so many more women coming through our services. We’ve seen financial blessings for the centers … but most of all, in the conversion of hearts of the women that come through our doors. We’ve increased the number to just under 1,000, for 2009. And that’s babies saved!”

Even the current political climate has not dampened Barone’s enthusiasm. “Look what has been happening nationally,” she pointed out. “It goes to show that, despite the challenges … in our culture, we have to remain trusting and faithful—and that God is in control,” In May 2009, for the first time since 1995, the year when the Gallup polling organization started asking U.S. adults if they are pro-life or “pro-choice,” a majority of Americans identified themselves as pro-life. Two Gallup polls taken since then have likewise indicated a prolife majority, a trend “suggesting a real change in public opinion,” according to Gallup. (See the May 14, 2010 report on Gallup.com titled, “The New Normal: Americans More ‘Pro-Life.’”)

These days, after daily Mass, friends gather around Sullivan to commiserate about the latest anti-life attack coming from Washington, D.C. Even now, her warrior persona remains unfazed. “I always look at it from the glass-is-half-full angle,” she reflected. “We’ve had a lot of disappointments—believe me! But the surge of pro-life organizing that occurred after Roe v. Wade in 1973 helped elect Ronald Reagan [in 1980]. That was also when Admiral Jerry Denton [Jeremiah Denton, a POWfor almost eight years in North Vietnam, the longest known captivity of a U.S. serviceman] was elected to the U.S. Senate. He was powerfully pro-life… We can surmount these roadblocks again and we will!”

The Novena of Masses for Life

Just try to saunter past the “Watch Me Grow!” photo display on your way in orout of where a Mass is being offered as part of a Novena of Masses for Life. It’s hard. The eye-catching 36” x 24” poster and composite photographs of a preborn baby moving through his first months of life are both artistic and realistic. One becomes submerged in a panoramic display of eyes, ears, tiny fingers and chubby cheeks.

Beginning with the Solemnity of the Annunciation of the Lord on March 25 and continuing on the 25th of the eight successive months until the Solemnity of the Nativity of the Lord on Christmas Day, the Novena of Masses for Life traces the progress of Mary’s pregnancy with Jesus. Launched in 2008, it has proven enormously popular throughout the Venice diocese, with at least 55 parishes and missions signing up to participate in 2010, offering more than 180 Novena Masses over the course of the nine-month period. As LFL’s board president, Patricia Bucalo, explained, “We wanted to highlight the beautiful realities of Our Lady’s pregnancy and baby Jesus, as a fully human person, having the same experiences in the womb that every preborn baby does.

“It wouldn’t have been possible without Bishop Frank Dewane’s enthusiastic support,” Bucalo commented, “not to mention the extensive promotional efforts of Jeanne Berdeaux and Marina Kopko of the diocese’s Respect Life Department.” The universal intention for these Masses is “for a greater respect for all human life.” She noted, “We hope that each Mass celebrant also folds the urgent importance of this intention into his homily.

”Call Kathleen Sullivan directly at 239-417-9436 if you would like assistance with launching a Novena of Masses for Life in your diocese. Suggested Novena Mass Prayers of the Faithful and resources for the “Watch Me Grow!” materials are available at LaityforLife.org.

Augusta Zawaski is a member of Laity for Life’s Board of Directors. For more information, visit LaityforLife.org or call 239-352-6333.