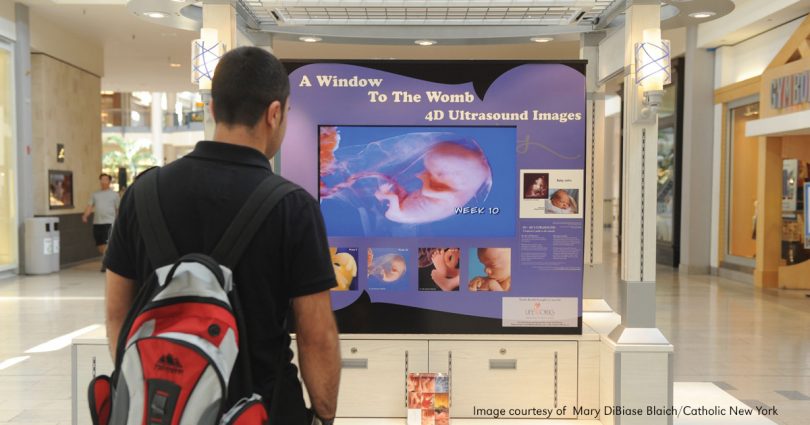 Truly, a picture is worth a thousand words,” said Mary Ann Kuharski, founder and director of PROLIFE Across AMERICA, an organization that delivers the pro-life message on billboards from coast to coast. She believes pictures not only provide the biggest bang for the buck—a key factor during a recession when donations to pro-life groups are down—but are also the best way to reach women panicked by crisis pregnancies.

A growing number of other pro-life outreaches, such as the Vitae Foundation, VirtueMedia and Truth Booths, likewise use engaging imagery and messaging to appeal to women in crisis pregnancies, and to change cultural attitudes regarding human personhood and human dignity.

Georgia-based VirtueMedia is the brainchild of former ad-man Tom Peterson. Begun in 1998, VM creates pro-life TV, radio and short film ads that air locally and nationally. It also partners with pregnancy centers, other pro-life groups, individuals, churches and Catholic dioceses to sponsor local or national pro-life ad campaigns. “VirtueMedia commercials have aired on broadcast and cable stations in over 1,500 cities throughout the U.S., as well as in many foreign countries,” its web site (VirtueMedia.org) states.

VM’s crisis pregnancy ads first aired nationally in the fall of 2008, with a five-week run on Black Entertainment Television and MTV. “The results amazed even the organizers,” according to the National Catholic Register (December 21, 2008-January 3, 2009). The ads sparked almost 22,000 calls to a helpline, and VM calculates that roughly 11,000 babies were saved. The Register also reported a 15−20-percent abortion decrease following VM ad campaigns in cities such as Atlanta, Charlotte, Dayton and Phoenix.

Ideally, Truth Booths are placed back to back in a suburban mall, where they endlessly replay a three-minute DVD showing 4-D ultrasound foot-age of preborn babies provided by American Life League (see sidebar), interspersed with images of their hands, feet and faces. Truth Booths have also been displayed at conventions, schools and churches.

The booth, now a Plexiglas-enclosed unit fitted with a 32-inch TV, was originally designed by New Jersey veterinarian Mike Nuzzi and his wife, Maureen, who placed the first one in a southern New Jersey mall in 2004.

Peter and Susan Cipriani of Cleveland soon read about the booths the Nuzzi’s had hand-built and were loaning out, and were inspired to help. They designed a portable, standard, one-size-fits-all model now sold at cost through the web site, www.TruthBooth.org. (An alternative to buying a booth is to buy the Truth Booth DVD and set up a display with equipment at hand.)

Mike explained that the Truth Booth’s success lies in its nonconfrontational approach: “[It] doesn’t mention abortion. It doesn’t take sides. It’s just science. It’s just images that say, ‘That’s what you were like.’” Maureen witnessed a young pregnant woman watch the DVD and exclaim, “That baby has a heartbeat. I can’t kill this baby. [My baby] has a heartbeat.”

With funding from local churches, James Stahlnecker, a permanent deacon at Staten Island’s Saint Mary of the Assumption parish, recently sponsored a Truth Booth in a local mall for eight months. He reported that it increased the number of visits to local pregnancy centers, and he watched teenagers “approach the booth, laugh and walk away, and then return to see the whole video. I think they never realized the humanity of the [preborn baby].”

The Cipriani’s sent their new, smaller Truth Booth model to the 2011 March for Life Convention, where the Nuzzis manned the exhibit. “What it needs now is for a well-funded organization to take this national,” said Susan. “That’s our dream.”

Mary Ann Kuharski’s 22-year-old nationwide media outreach “was born out of frustration,” she explained. An active pro-life warrior since 1970, she felt pulled to promote pregnancy resource centers, but for every pregnant woman who called or walked through a pregnancy centers door, she feared “there were 20 or 30 others who were still getting abortions” and hadn’t even heard of the centers.

Because others in the Minnesota pro-life movement weren’t as comfortable about getting into large-scale media buying, Mary Ann started PROLIFE Across AMERICA (ProLifeAcrossAmerica.org) as a separate organization. PAA’s trademark is billboards featuring appealing images of smiling babies accompanied by its hotline number, and brief, catchy slogans that convey a biological fact or spiritual truth about preborn babies.

Mary Ann’s group has also bought radio, television, bus and print ads, but finds that 80−90 percent of its hotline calls are triggered by the billboards. “Everyone sees billboards,” she explained. And “everyone” includes men. Some billboards target fathers or potential fathers of at-risk preborn babies. An alternative to the large billboards are PAA’s mini-billboards, which can be displayed on private land.

Mary Ann has collected many anecdotes reflecting the billboards’ efficacy. So its not surprising that they’ve aroused abortion proponents’ ire. “They think it’s sneaky and underhanded using babies,” she chuckled.

PAA’s billboard and radio ads generate about 200 monthly hotline calls from people seeking information and assistance, and the group now puts up a total of about 6,500 annually in 37 states—wherever enough donors come forward individually or a local organization puts up the funds.

The Missouri-based Vitae Foundation (VitaeFoundation.org) began as the Missouri Citizens for Life Education fund, started by Carl Landwehr in 1974. Its first pro-life educational TV message aired in Missouri in 1992, and in 1993 it became the Vitae Society (renamed as the Vitae Foundation in 2008).

In the early 1990s, Vitae commissioned landmark psychological research on the emotions of women in crisis pregnancies. Its web site reports, “A communication strategy was birthed from this initial study that resulted in a complete paradigm shift within our own pro-life arena. This new approach was to be woman-centered and nonconfrontational, while inviting audiences to think critically about the issue.” Its findings are still widely used in pregnancy center training manuals, and Vitae continues to study factors that influence women’s pregnancy decisions.

According to Vitae’s executive vice president, Debbie Stokes, this is why its messaging for pregnant mothers is focused on soft and comforting images of women of child-bearing age, and not on traditional pro-life images of children within or without the womb.

“If the woman is in a crisis pregnancy,” Debbie explained, “this is not the time to be logical. Her main concern is herself: Does the pregnancy mean an end to her future?” Vitae’s TV ads aim to calm and assure the pregnant mother, and tell her how to get help. “Once we get her through the panic, we can get her to think more clearly about the larger issues,” she said.

The pro-life movement also strives to change the hearts and minds of Americans not in crisis, especially those who might be later. Debbie believes that ads featuring children are vital for educating this particular group, and that such ads can also change the minds of some women—and men—faced with crisis pregnancies.

As of 2010, the Vitae Foundation had a media presence in 77 major media markets, located in 29 states and 16 countries. Its media strategies now include TV, radio, internet [www.YourOptions.com], mobile, print and “out-of-home marketing,” according to its web site, which also provides very impressive statistics for babies saved and calls generated to local pregnancy centers by its 2009 and 2010 advertising campaigns. (See also “Changing lives in 30 seconds” in Celebrate Life, January-February 2008.)

Given the undeniably sordid nature of abortion and the enduring power of images of the child alone, or the mother and child, the pro-life side clearly has the advantage when it comes to using images in the battle for life. And the pro-life movement is becoming increasingly adept at capitalizing on it. Perhaps that’s one of the reasons why polling data shows that the number of Americans identifying themselves as “pro-choice” is steadily declining.

Like the other organizations profiled here, American Life League uses powerful visual imagery to change minds, touch hearts, and save lives and souls. Soon after 4-D ultrasound scans of babies in utero were pioneered by Dr. Stuart Campbell, a London obstetrician, with his permission, we sent staffers to his clinic to produce a groundbreaking six-minute documentary that uses this technology to show preborn babies yawning, blinking, bouncing, spinning around, smiling, scratching and sneezing: Baby Steps (see the ad in this issue or visit BabyStepsDVD.com). We also made this footage available for the Truth Booth DVD.

We’ve distributed thousands of copies of Baby Steps, free of charge, to pregnancy resource centers nationwide, and thanks to our collaboration with Human Life International, it has now been distributed worldwide. This documentary is widely used by sidewalk counselors with portable DVD players, and has been used in classrooms, legislatures and many other venues. We’ve received many reports from pregnancy centers and sidewalk counselors about its lifesaving impact.

Baby Steps vividly shows that though we can’t see him with ordinary vision, there is indeed a human person—not a tissue blob—in the womb during pregnancy. And weve just produced another compelling short film, The Presence is Real, which shows that, just like the baby in the womb, though we cant see Him with ordinary vision, Christ is truly present in the Holy Eucharist—body, blood, soul and divinity—and that “Catholic” politicians who violate the real presence of a person in the womb by supporting abortion but continue to receive Holy Communion at Mass likewise violate the real presence of Christ in the Eucharist. You can view The Presence is Real at ALL.org/tpir and share this video link with others. (See also Judie Browns commentary with the same title in our Fall 2010 issue.)