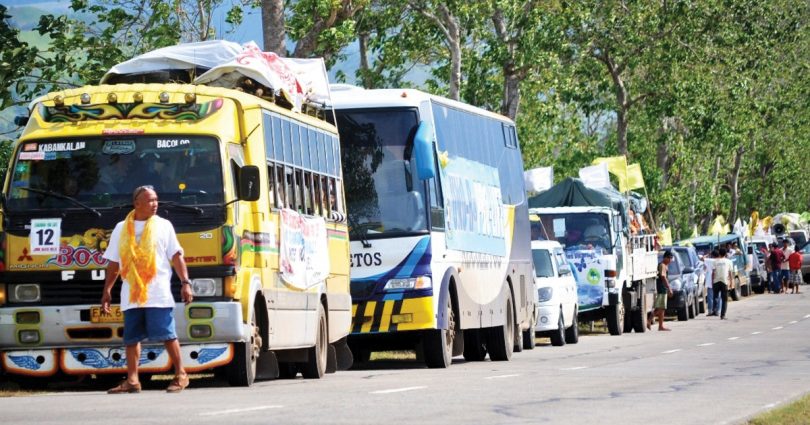 Editor’s note: As we reported in our March-April 2009 issue (“A dangerous time in the Philippines”), for many years, global population controllers have relentlessly targeted the Philippines. Thanks to vigorous opposition from the Catholic Church and the pro-life movement, they haven’t succeeded in imposing their anti-life and anti-family agenda. Father Camon updates us on recent developments in this battle.

The Republic of the Philippines is experiencing tensions that threaten to deeply divide the people of this Catholic country. The Church’s hierarchy views the “reproductive health” (RH) bill currently in the country’s House of Representatives as detrimental to the health and morals of Filipinos, and a serious violation of the Church’s teachings.

The RH bill aims to reduce the size of Filipino families by forcing couples to receive RH indoctrination before obtaining a marriage license and would promote all forms of contraception and sterilization, mandate permissive sex education for children, violate conscience rights, and impose prison sentences and/or large fines on any health care provider that doesn’t comply with it, as well as opponents who disseminate “malicious” information about the bill.

The RH bill violates the Filipino constitution’s explicit protection of the family and the right to life, and would be funded by Filipino taxpayers. It could also pave the way for widespread acceptance of contraception and abortion.

Similar bills have been introduced in the Filipino Congress since 1998. On March 21, the House of Representatives adjourned without having voted on the current RH bill, and then the House will resume only from May 6 to June 7 of this year. Meanwhile, awareness campaigns and protests conducted by RH bill opponents continue nationwide.

The Church militant on the move

I belong to the Diocese of Bacolod, which is located in Negros, the fourth largest island in the Philippines in terms of land area. The island is divided into two provinces: Negros Occidental and Negros Oriental. Bacolod is the provincial capital of Negros Occidental. Last year, the bishop of the Diocese of Bacolod, Most Rev. Vicente Navarra, called on his clergy and faithful to convene a Caravan for Life, to demonstrate the very strong opposition of the people of Negros to the RH bill and raise public awareness of this very dangerous legislation.

On Monday, April 11, 2011, there was a huge traffic jam in the city of Bacolod when the Caravan for Life kicked off from Sacred Heart Shrine, located on the grounds of the diocese’s Sacred Heart Seminary. Over 100 vehicles carrying about 600 people traveled around the entire island of Negros for five days.

Participants came from various parishes, organizations, and schools of the Diocese of Bacolod, while delegates from other dioceses joined the caravan as it passed through their territories. Caravaners included Catholic and Protestant clergymen; members of religious communities; seminarians; parish, youth, and community leaders; college professors; and leaders and members of various lay organizations.

Many people gathered at various rally points along the route, to attend talks on the medical, legal, and moral aspects of the RH bill. The speeches and educational materials enlightened us about the many ways in which it threatens the physical, social, and spiritual well-being of individuals and families as a whole.

For love of our children

A very memorable scene during the Caravan for Life was the sight of children lining the streets, waving small yellow and white flags (the papal colors), to show loyalty to the Holy Father and the magisterium. In Pulupandan, a small town in Negros Occidental, a group of very young children—some as young as five or six years old—waved and jumped excitedly as the caravan went by. Probably, they had seldom seen so many vehicles passing by at one time.

When we passed another group of children, they joyfully shouted at the top of their lungs, “Mabuhay kami! Mabuhay kami!” This is a Filipino greeting that could be dynamically translated as “Victory for us!” or formally translated as “We live!” Their exuberance brought tears of joy to my eyes and filled me with hope for our country’s future. I prayed that indeed our children would live and have a good life.

The smiles of these children soothed the fatigue and stress of traveling with the caravan. We convened it to protect their lives and those of children yet to be born. We fight against the passage of the RH bill to ensure that the Philippines will continue to be filled with healthy children, who are the promise of a vibrant future.

For us Filipinos, children are the treasures of the family. Every single child is a gift from God. However, this perspective is slowly being eroded by the pragmatic philosophies of the West (which colonized the Philippines for four centuries before it gained its independence). Much of the West now considers children financial burdens, instead of appreciating each child as a fruit of love. It’s ironic that many of my countrymen who have publicly professed their patriotism have, in fact, manifested a “colonial mentality” in dealing with our nation’s problems.

For the purpose of penance

The Caravan for Life was also undertaken in the spirit of penance. I considered it a kind of a pilgrimage. The story of the Israelites’ sojourn in the desert became vivid in my mind, and the caravan became, for me, a virtual journey through the desert, from Egypt to the Promised Land. Just as the Israelites experienced difficulties and opposition during their sojourn, so did we encounter discomforts and hardships. This was the first time I had ever joined an island-wide caravan—and I found that it wasn’t easy. There were many moments when we needed to give up familiar routines and comforts, and endure physical hardships and other inconveniences.

Just as the Lord gradually taught and purified the faith of the Israelites in the desert, I think the caravan’s daily progress and our daily hardships gradually purified the motives of many participants. It slowly dawned on them that this was more than an opportunity to travel the whole of Negros and enjoy the camaraderie that developed among them. They became more deeply aware that we were doing this for a greater cause: the sanctity of life and the integrity of the Filipino family.

The path to true victory

Jesus didn’t come to please the powerful Romans or the mob. He didn’t offer the world material prosperity, nor did He become a ruler. His only desire was to follow the will of the One Who sent him. He humbled Himself and spoke the truth, even when this led to His crucifixion. And by consistently obeying His Father’s will, He ultimately triumphed over sin and death.

Whether or not the Caravan for Life affected support for the RH bill in the House of Representatives was, for me, irrelevant when viewed in light of the example Jesus gives us. Similarly, being able to endure the hardships of caravan travel was far less important than the reality that each caravan delegate became an agent of hope.

What was most important, for me, was realizing that there are still many people of deep faith who are ready to defend the sanctity of life and the integrity of the family, and bravely proclaim to the world that there is so much more to life than just giving in to one’s instinctive impulses. Our job was to tell everyone that there is a God Who is truly alive, and following His will is a far surer and more rewarding path than believing the promises of politicians who offer nothing but fool’s gold.

Although the caravan ended on April 15, 2011, for us Filipinos, our spiritual journey continues until we realize the value of protecting and nurturing the life of all human beings “from womb to tomb.” The journey’s joyous and triumphant end will come when we’re able to hear, deep in our hearts, the children shouting in delight, “Mabuhay kami! Mabuhay kami!”

SIDEBAR: American tax dollars fuel the assault on the Philippines

Most American pro-lifers are well aware that Planned Parenthood Federation of America is America’s biggest abortion, contraception, and sex education enterprise, and that it receives hundreds of millions of U.S. tax dollars each year. But many are unaware that PPFA has also been heavily involved in population control efforts in foreign countries for 40 years. In fact, PPFA devotes an entire page of its website to touting its anti-life and anti-family initiatives in the Philippines.

You can help to stop American tax dollars from being used to help PPFA’s assaults on life, family, and moral values both here and abroad by visiting StopPlannedParenthood.com.

Sadly, PPFA isn’t alone in this insidious endeavor. According to LifeSiteNews.com (February 11, 2011), the United States Agency for International Development and the United Nations Population Fund are estimated to have spent over $600 million promoting “reproductive health” bills in the Philippines. Please tell your congressmen and senators that you want the federal government to stop spending your hard-earned tax dollars to fund anti-life and anti-family initiatives in the U.S. and in foreign countries.—Editor

Rev. Deogracias Aurelio V. Camon, MA, is a priest of the Diocese of Bacolod in the Philippines. He contributes articles to various publications in his country and abroad, and has published several books. Father Camon earned a master of arts in religious studies, and is currently engaged in the apostolate of giving retreats and facilitating Bible studies.