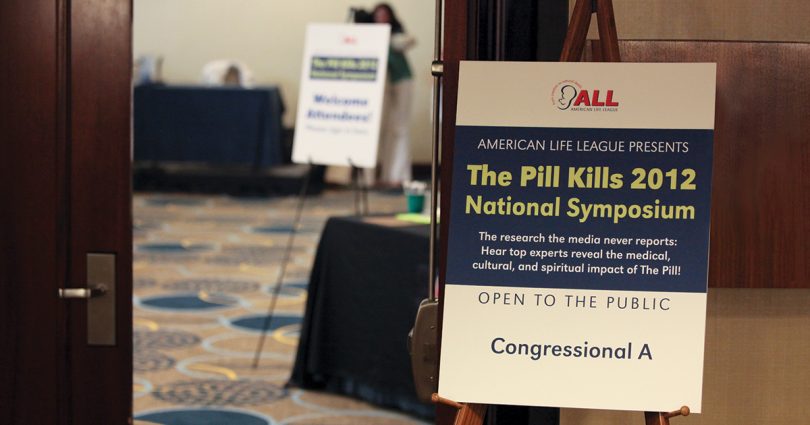 Evil comes in many clever disguises. In the case of the concoction of steroidal hormones known as “the pill,” evil is packaged and sold as a panacea for the world’s problems and as women’s ticket to freedom. In reality, the death-dealing birth control pill has spawned an immoral society obsessed with self. This selfishness is destroying women, babies, families, and the nation. The latest proof of the pill’s poisonous effect is that it’s now the vehicle being used to destroy religious freedom in these United States—long extolled as the land of free.

To expose the malignancy that is the pill, American Life League joined with 31 cosponsors across 16 states to bring a panel of renowned experts to our nation’s capital on June 2 (Protest the Pill Day), for a national symposium on the pill’s inherent dangers. This year’s theme was “The pill kills women and babies.” The program was emceed by Kara Russo, songwriter, pro-life activist, and producer of the Standing for Life in Rhode Island TV show.

It was the fifth year that ALL has sponsored an event coinciding with the anniversary of the U.S. Supreme Court’sGriswold v. Connecticut decision (1965), which set the wheels in motion for the “sexual revolution.” In that case, which was instigated by Planned Parenthood, the court alleged that it found a right to privacy in sexual matters in the “penumbras” of the Bill of Rights. The court invoked the same nonexistent right to privacy when it later decriminalized abortion and sodomy.

How the pill kills women and babies

Angela Lanfranchi, M.D., F.A.C.S., is a noted expert on the pill, a breast surgeon, and a professor of surgery at New Jersey’s Robert Wood Johnson Medical School. Much of her practice involves surgery on breast cancer patients—many of whom have been duped by Planned Parenthood and its ilk into believing the pill is the ultimate good and that any accompanying risks are inconsequential. She opened the symposium with the hard medical facts on how the pill kills women and babies, and outlined the four major mechanisms by which the pill kills women—which are hardly inconsequential.

THE BLOOD CLOT RISK: Studies show that pill users have twice the risk of heart attack, twice the risk of stroke, and two to three times the risk of a sudden blockage in a lung artery, because the pill increases the risk of blood clotting. Women using pills containing androgenic progestins (such as Yaz and Yasmin) have an additional 60–80-percent risk of developing a blood clot in a vein. This is why the manufacturer of these two drugs will reportedly pay at least $100 million to settle some 500 lawsuits filed on behalf of women who were injured or killed by their use.

Pill users with hereditary conditions that can cause blood clots have higher risk levels, but are seldom screened for these conditions and rarely warned of the danger the pill poses for them.

THE CANCER RISK: In 2005, the International Agency for Research on Cancer (part of the United Nations’ World Health Organization) classified estrogen-progestin combination drugs (including the pill) as a group 1 carcinogen, known to cause breast, cervical, and liver cancer.1 Although the pill reduces the risk of uterine and ovarian cancers, pill users have six times more breast cancer than uterine and ovarian cancers combined. Any cancer-preventing benefits of the pill are greatly outweighed by the breast cancer risk. It’s noteworthy that, since 1975, the risk of in-situ (early-stage) breast cancer has increased 400 percent in premenopausal women.

Using the pill for five to nine years doubles the risk of cervical cancer. Women who use it for at least 10 years have a cervical cancer risk that is over three times higher than normal. And pill use increases women’s chance of contracting primary liver cancer by 50 to 70 percent, even though this cancer is rare in developed countries.

THE PILL KILLS BABIES: The pill is an abortifacient. Women on the pill have light menstrual periods because the pill reduces the thickness of the endometrial lining, which makes it difficult for an embryo to implant in it. And that can cause an early abortion. The pill can also cause early abortions by triggering certain biochemical reactions, including changes in the level of interleukins, which are molecules that are essential for implantation.

All of the scientific studies Dr. Lanfranchi referred to are documented in her PowerPoint presentation, which can be accessed at www.ThePillKills.com.

Love has eluded them

Pia de Solenni, S.T.D., examined the pill’s impact in light of the Catholic Church’s teachings on marriage and sexuality. An ethicist, theologian, and expert on the sanctity of life, women’s health, the new feminism, and culture, she began by stating, “In reality, the Church is about love at its fullest.” The Church forms our understanding of unconditional love, which is love given totally for the sake of the other, and mirrors Christ’s love for the Church and the Church’s love for Christ.

Dr. de Solenni underscored the foundational problems resulting from use of the pill and the unbridled sexual activity it has unleashed on college campuses. While talking to students at Seattle University, she pointed out that sex should convey intimacy, unity, trust, and love. The students were intrigued by her discussion of love, but had no idea how to find it. They told her that while sex was a given on campus, “love was completely elusive.”

Throughout most of society, sex and love have now been totally divorced. Traditional families are on the decline, as young people shun marriage and children. Sex has become a recreational activity, and the pill and abortion are used to prevent or eliminate the children resulting from those encounters.

Planned Parenthood founder Margaret Sanger’s mission to separate sex from total and mutual self-giving for the good of the other has run its full course, and cheats today’s young people out of the love and family foundation they need—but have no idea how to attain.

“Intimacy, unity, trust, and love—what they represent is the gift of self, which means I give my mind, my body, and my soul entirely to another person, including my fertility,” Dr. de Solenni said. Contraception says, “‘I’m giving you my body for the night, for the hour, for a few months, but I certainly don’t want to risk my fertility with you.’ It’s not a complete gift of self. That lessens our ability to love.” Love can be given without being diminished, quite unlike tangible items such as cars and clothes. And when given to others, love produces even more love.

Running the gauntlet against black genocide

EWTN personality Gloria Purvis, creator and host of the upcoming TV series Authentically Free at Last, spoke about the use of birth control and abortion to target the African American community for extinction. She also chairs Black Catholics United for Life, and serves on the board of Washington, D.C.’s Northwest Pregnancy Center, the advisory board of the Maryland Catholic Conference’s Respect for Life Department, and the National Black Catholic Congress’ Leadership Commission on Social Justice.

Purvis explained how deceptively the pill is marketed to the African American community. “You hear the terms like better health, women’s empowerment, family planning, and all these things sound good. But when you look at the origins of these euphemisms, you will find that they are neither good nor sound. … [Margaret Sanger] came in with her slick talk to try to talk the African American community into buying her program, which is really sterilization, birth control, and abortion.”

Sanger targeted the clergy and elite of the African American community, and many fell for her promise that promoting contraception would improve health and economic development. The results have been devastating. Thirty percent of all abortions kill the children of African American women today, while African Americans comprise only 12 percent of the total population.

Sanger’s destructive legacy continues in the African American community today. Among the disturbing evidence she presented was the fact that when she and her African American friends became pregnant, “it was like running a gauntlet to get to delivery,” with medical personnel at every turn advising abortion followed by birth control—even though the women were married, well-educated professionals who were well-equipped to care for children and wanted to have them.

Events around the nation

In conjunction with the symposium, protests, prayer vigils, and rallies were held nationwide to call attention to the perils of the pill. American Life League Associate group Pro-Life Wisconsin coordinated an extremely effective effort, with some 13 events across the state. In Dallas, Texas, STOPP of Dallas joined with Pharmacists for Life International for a prayer vigil outside Planned Parenthood. Similar events were reported in Tennessee, Florida, Pennsylvania, South Carolina, Michigan, Maine, and Virginia.

Rita Diller is national director of STOPP International and The Pill Kills, which are projects of American Life League. To watch symposium talks online, visit www.ThePillKills.com or www.youtube.com/AmericanLifeLeague.2  Clickhere to learn more about the birth control pill and view photos from this year’s Protest the Pill events.

2DVDs of the symposium talks are available from ALL free of charge.

American Life League’s The Pill Kills 2012 cosponsors include the following:

A complete list of cosponsors can be found at www.ThePillKills.com.

Rita Diller is a pro-life consultant, speaker, and investigative journalist with decades of experience confronting and stopping Planned Parenthood. She is past national director of ALL’s Stop Planned Parenthood International, and has served as Respect Life Director of the Roman Catholic Diocese of Amarillo, Texas, for 12 years. Contact Rita by email at rdillerusa@gmail.com.