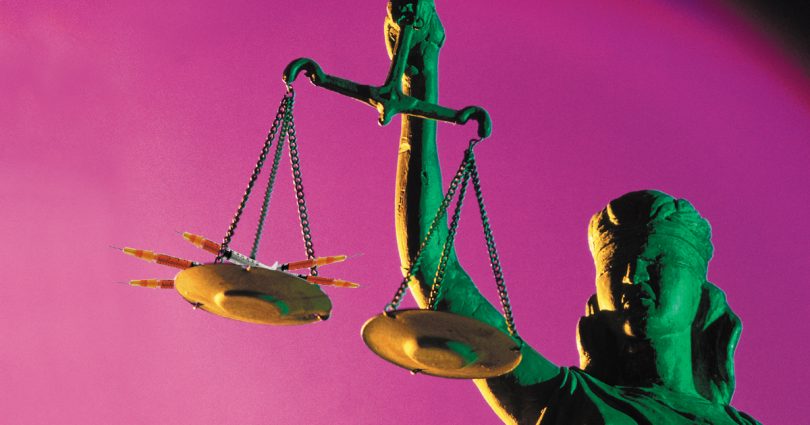 Shannon Law was not opposed to vaccines in general. In fact, her children’s required immunizations were all current. But after reading an article in American Life League’s Celebrate Life about several vaccines that were cultivated on the lung tissue of aborted babies, her heart sank. Her children had already received at least one of the vaccines mentioned—the MMR, and as she would reiterate later, “It mad me sick inside to think that my own precious babies were benefiting from the murder of their own tiny brothers and sisters in Christ!”

So when the chickenpox vaccine, which is cultivated on aborted fetal cell lines MRC-5 and WI-38, became mandatory in Arkansas for all school children, Shannon adamantly refused to allow her two boys Rob, a first grader and Joey, a kindergartner, to be immunized. So when the school notified her that Joey would be expelled if he was not vaccinated, she immediately contacted her local Church for assistance in filing a religious exemption. Unfortunately, upon hearing her predicament, the pastor admitted it had never been addressed before at the parish level and he recommended she contact the local diocese. After being bounced around among several diocesan officials, she was finally told, “someone will get back to you.” No one ever did.

With time running out, Shannon decided to call American Life League for help. But while she paced the room nervously awaiting a return call from their office, panic began to set in. Shannon had already been warned that the Arkansas law was formidable, if not impossible to overcome. Their religious exemption regulation was so stringent that, in effect, it could only be used by those faiths that refused to accept vaccinations of any kind. And even if she could somehow overcome the state objections, her Church was remaining silent and she needed its backing. In desperation, Shannon picked up the phone and with trembling hands, dialed the number for the Sacred Congregation for the Doctrine of the Faith at the Vatican.  Much to her surprise, a kindly, English-speaking priest, Monsignor Charles Brown, immediately answered her call. He listened sympathetically to her plight. And while he was not aware of this problem, he suggested she first make contact with the United States Conference of Catholic Bishops while he did some further checking.

“And you must tell Ms. Law,” he cautioned, “that if she turns away from her conscience on this matter, it would be considered a grave error!”

In the meantime, American Life League had called Children of God for Life, a fellow pro-life organization that was accustomed to dealing with such problems on a regular basis. They contacted Shannon later that day and promised to contact the Vatican directly and to get her some legal help. She was deeply grateful for even the slightest ray of hope.

Help on the way

The very next morning, Children of God for Life contacted Msgr. Brown at the Vatican and explained they were indeed working with the USCCB, but no clear-cut guidelines had yet been defined. And since the problem of using “tainted” vaccines was not confined to the United States, he agreed the Vatican needed to intervene. “The Magisterium has never ruled one way or another on the vaccine issue,” Msgr. Brown stated. “While we review this matter, all Catholics must be instructed to follow the Church teaching on Moral Conscience which is clearly defined in the Catechism of the Catholic Church and in several Vatican encyclicals.”

“And you must tell Ms. Law,” he cautioned,  “that if she turns away from her conscience on this matter, it would be considered a grave error!” Within 24 hours, the Church documents were assembled by Children of God for Life and rushed to Shannon. Upon receiving the news, she was elated and with renewed spirit, proudly exclaimed, “I have God and the Vatican on my side—what else do I need?”

She needed a courageous attorney. Within a week, Erik Stanley, from Liberty Counsel, a Christian law firm based in Orlando, Fla., agreed to take her case. It was not going to be easy, since by this time the state health department had formally rejected Shannon’s request for a religious exemption.

Weeks earlier, Shannon had asked her pastor to endorse a letter stating that she had the right to exempt in accordance with Church teaching, which he rather grudgingly did. But even with that document submitted, Arkansas state health official Kaleem Sayyed stated: “[Your Pastor’s] letter states that your view (exempting from vaccines) is not documented explicitly by Catholic teaching. The State of Arkansas does not grant religious exemptions based on personal statements.”  Her son was expelled. The battle lines were drawn.

As Liberty Counsel filed its motion against the state, another Catholic parent, Susan Brock, would become a second party in the lawsuit, giving the entire matter full media coverage. Those were dark days for Shannon, as her once friendly pastor publicly shamed her and ostracized her for putting him in the public spotlight. And as Shannon began to feel the pain of the countless saints who have suffered for their faith, she simply asked for prayers that she would have the courage to endure what was to come.

When Shannon Law v. the State of Arkansas was finally brought to court on November 9, 2001, the prosecuting attorney began his case by boldly displaying what he deemed to be appropriate Catholic teaching to the judge. “I have an article here with comments from Catholic ethicists who say that using vaccines from aborted fetal tissue is morally acceptable,” he stated rather smugly. Not to be intimidated, defense counsel Erik Stanley addressed the judge. “Your Honor, I too, am holding a document in my hands taken from the Catechism of the Catholic Church that is attested to be a valid teaching of my defendants’ faith.”  He then added, “You will note, Your Honor, mine is signed by Pope John Paul II.”

With the clear evidence of Catholic Church teaching, Judge Susan Webber-Wright moved on to the wording of the law itself, which Mr. Stanley pointed out was clearly in violation of the 14th Amendment, which gives equal protection to all religious faiths. The judge agreed. “At first glance,” she stated, “this law appears to be unconstitutional as written. However, I cannot change the law in this hearing. What I will do is grant the right for the children of these parents to attend school while the matter is further investigated by the state.”

It would take a year and a half before the state would finally concede defeat. During the April 2003 regular session, the Arkansas law was amended to provide both religious rights and personal philosophical exemptions to all who oppose the vaccines. It was especially good news for Shannon, who was preparing to relocate within the state and feared she would have to go through the entire ordeal again with another school. And it was a great triumph for all residents of Arkansas who were finally freed from an oppressive and clearly unconstitutional mandate. Even more far reaching was the first established guideline given directly by the Vatican that could not be denied for any Catholic, anywhere in the United States. The right to follow a properly formed conscience is sacred to Catholic Church teaching: undeniable, irrefutable and unchangeable.

During one of those many counseling sessions two years ago, Shannon was told that if somehow her litigation was able to get the law changed, people would always remember it by her own name. Rightfully we have dubbed it “Shannon’s Law.”  Sometimes it does not take an army but only one person willing to put on the armor of Christ to defeat the enemy.

Do we serve God in hope, looking to His promises, confiding in His love, seeking His kingdom, and leaving the rest to Him?  Do we rely on His merits, His pains, His sufferings, fulfilling our common duties in union with Him—our contrition united to His contrition, our tears to His tears, looking forward to the time when He will appear, when we shall see Him as He is, see him in His glory, and be glorified with Him—rejoicing in hope! —for hope shall never be confounded?