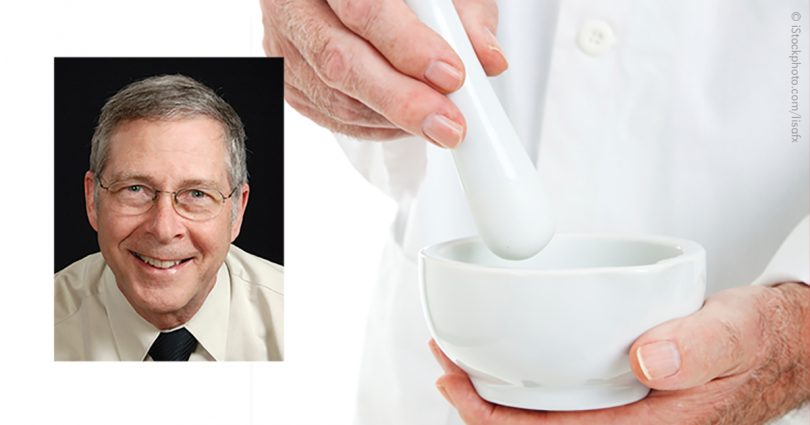 Devastated after learning that hormonal contraceptives can end the lives of already-conceived babies, pharmacist Michael Kelly had an agonizing, life-changing decision to make. On his knees, he cried out to God, “What should I do, Lord?” God answered. And Michael had a faith so strong that he did as God asked. He walked away from his lucrative, decades-long career as a pharmacist, even though it was his only significant means of support.

How could someone work as a pharmacist for decades and not know that hormonal contraceptives can prevent the implantation of a preborn baby in the earliest stages of development? That is a real sore spot with Michael and one that he hopes to remedy for up-and-coming pharmacists. During pharmacy school and all of his continuing education, he was never informed of the postfertilization actions of hormonal contraceptives.

“All pharmacy schools should disclose this information to their students,” Michael stated emphatically. “A lot of students get into pharmacy without full knowledge of the moral implications, and at that point their life is invested. Disclosure needs to begin very early in their assessment of pharmacy as a career option. But to my knowledge, there is no conversation out there about it.”

The Catholic Church beckons and enlightens

Michael was born in Munich, Germany, after World War II. His father, a devout Catholic, was a fighter pilot and was killed in a training accident after the war ended. Prior to his father’s death, Michael had been baptized in the Catholic Church. But he never made his First Holy Communion, nor was he confirmed. “Religion was never a part of our lives after his death,” he explained.

His marriage in 2001 to Kathy, his high school sweetheart, brought Michael home to the Catholic Church. His return to the Church ultimately brought him to God and gave him the courage to jump off the career ship that had kept him well afloat, financially, for his entire professional life.

Curiosity about this trend led Michael to embark on his own studies to better understand how oral contraceptives work. One evening, after questions about contraception began arising in his mind, he checked every oral contraceptive in the pharmacy, took out the package inserts, and began reading. He found that every single one had postfertilization effects listed.

Michael then started digging deeper to learn all he could about the subject. The research was tedious. “It was really hard to find information about the postfertilization effects,” he said. Most of the material he found on the Internet praised contraceptives.

Materials produced by American Life League and its Associate group Pharmacists for Life International (PFLI.org) played a central role in Michael’s research and subsequent discovery of the truth. “They really opened my eyes to something I had never considered: the real truth about oral contraceptives,” he acknowledged.

He noticed that in 1965, the American College of Obstetricians and Gynecologists redefined pregnancy as beginning at implantation rather than fertilization, apparently to legitimize and facilitate the acceptance of oral contraceptives.1

American Life League’s Declaration of Life by Pro-Life Physicians had a significant impact on Michael.2 “The declaration outlines the entire history of the culture of death,” he observed. “After reading the declaration, I became focused on the need to find the truth.”

Michael recalled, “One of the first things that made me sit up and take notice was a document from Dr. Walter Larimore, ‘Postfertilization Effects of Oral Contraceptives and Their Relationship to Informed Consent.’”3 Dr. Larimore’s research—originally undertaken to prove that postfertilization effects cannot cause unknown loss of already-conceived preborn babies—resulted in diametrically opposite findings, and ultimately led to Dr. Larimore’s decision to cease prescribing the pill for his patients.

“I discovered so much evidence about postfertilization effects in reading that document [that] there was now no question in my mind that they play a role,” Michael said. “I was shocked. I was back in the Catholic Church at that time, and I thought, ‘What does this mean to my faith? How much of my entire career was about aborting who knows how many babies?’”

While Michael was faced with the burning question of how to respond professionally and personally to his newfound knowledge, Divine Providence led him to Pope John Paul II’s 1994 address to Italian pharmacists, in which the Holy Father told the pharmacists, “The distribution of medication—as well as its production and use—must be governed by a rigorous moral code attentively observed.”4

“I suddenly realized the Church knows the truth and has all along. And I had been clueless,” Michael admitted. “The whole world is saying contraceptives are not a problem, when they are. This is crazy. What is going on here?” What is going on here, he concluded, is evil, plain and simple. “Satan’s fingerprints are all over this,” he declared.

“I have found that most women do not have a very good understanding of their own reproductive biology,” Michael disclosed. “They are easy prey [for those seeking to exploit them]. Women’s health has been twisted into this ‘right,’ which is really license. We have given women a license to kill their innocent children. No one else has a license to kill an innocent person, except for women in our modern society.”

The last document that made Michael “unbelievably uncomfortable” was “The Birth Control Pill: Abortifacient and Contraceptive,” an article written by Dr. William F. Colliton Jr., an obstetrician-gynecologist and former American Life League board member.5 “The document talks about the number of lives that have been lost to abortifacient contraceptives. He goes through the math, talks about breakthrough pregnancies, and boils it down to over 1.8 million lives lost to contraceptives annually in the US. That is a larger number than is lost to procured abortion [about 1.2 million annually],” Michael pointed out.

“I had to get on my knees, and pray and pray,” he said. His prayers led him to a conference with a parish priest. While understanding his concerns, his pastor advised him to continue the good work he was doing as a pharmacist, but find a way to avoid direct involvement with contraception.

“I had called all over the state of Oregon looking for pharmacies that don’t dispense contraceptives, to no avail. My pastor advised [that] if there was any way I could opt out, that would be the best,” Michael explained. “I said, ‘But the Church tells me I should have no part in this at all,’” he continued. “Even if I [were] not handling contraceptives, I couldn’t have a part in employment with a medical facility—making money off of them—when they are promoting these things that are killing unborn children. The Church tells me I can have no part of this, so I’m thinking I may have to quit my pharmacy career altogether.”

Michael’s pastor accepted that possibility and noted how obedient he was to consider putting aside his livelihood. “I just felt devastated for the part I played in the loss of the lives of all those children,” he said. Until then, he had been an integral part of a medical team, and dispensed medications while advising doctors, other medical staff, and patients about the same.

God speaks through a dream

Still praying fervently for peace and closure, Michael informed his employer he might be giving his notice of termination on the following Monday. His voice was filled with awe as he described what happened next:

That Sunday night, I had a dream. I was surrounded by light—the most comforting, warm, beautiful light. I was witnessing the birth of a calf. I knew that the light around me was Jesus. We were both observing this birthing process. I was amazed by it.

But Jesus said, “Something is not right.” I noticed, as the calf was being born,     that it was still encased in the fetal membrane, which was extremely thin. The calf was expelled from the membrane and hurtled headfirst towards the ground.

At that moment, Jesus intervened. He reached down and gently laid it on the ground. I said, “Lord, is it alive?” He said, “No, Michael, sadly not.” I could feel His great heartache.

I immediately woke up from the dream, sobbing uncontrollably. I knew exactly what the dream meant. I was being told I could no longer have a hand in this. It was basically a metaphor for what was going on with these contraceptives—not allowing implantation and expelling babies before their time.

Set free by the truth

That was it. I told my employer the next morning that I could no longer be a part of this culture of death. I left my pharmacy career in January 2010. At that time, my wife and I owned two houses, each with a mortgage and lots of expenses.

We went from a hefty income to basically nothing overnight. While it was quite a challenge, we lifted it up to the Lord. He worked it out for us. We eventually ended up with a modest retirement income. . . . Truth really does set you free. Until we realize that we are guilty of mass murder of these innocents, Satan will continue to steal souls through contraceptives.

Michael gives this advice for anyone considering a career in pharmacy: “First, consider the grave moral implications involved with dispensing any drug with inherently abortifacient properties. If Catholic, they should become familiar with the Church’s teachings on life and then be obedient to these teachings.”

Michael reports that his prayer life has blossomed since the truth set him free. He spends an hour every morning in pro-life prayer. “We have this challenge ahead of us, and I know we will win,” he said. “We are already seeing people’s hearts changing.”

Michael is available to speak the truth about contraceptives and about the journey of faith that led him to abandon his clinical pharmaceutical practice. You can contact Michael at mcgrathfx@charter.net.

1 In September 1965, the American College of Obstetricians and Gynecologists issued a Terminology Bulletin that “officially” changed the definition of conception from the union of sperm and oocyte to implantation: “Conception is the implantation of a fertilized ovum.” It then defined pregnancy as beginning at conception in accordance with ACOG’s new definition (i.e., when an already-conceived baby is implanted into the wall of the mother’s womb). —Editor

2 American Life League created this declaration (available on ALL.org) in 1998, and circulated it to members of the medical and scientific communities for their review and endorsement. The statements of the 229 physicians who have signed it are on file at American Life League’s office. —Editor

5 At the time he wrote this article (signed by 26 other distinguished physicians and available on ALL.org), Dr. Colliton was a clinical professor of obstetrics and gynecology at the George Washington University Medical Center in Washington, DC.