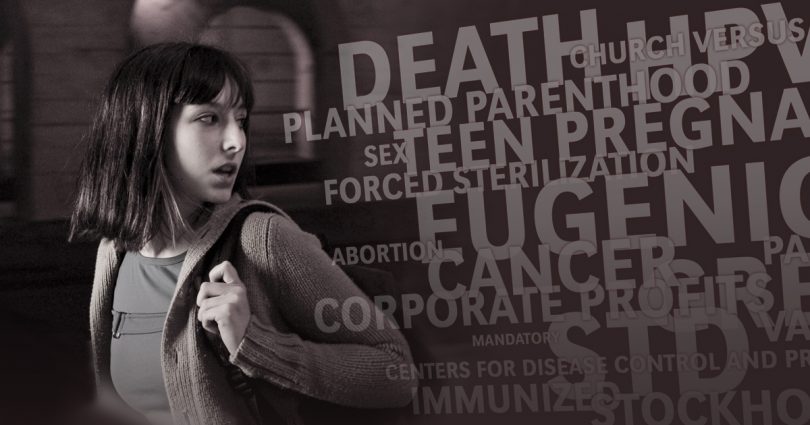 With these words, I will relate a story about what is going on in the United States regarding those who wish to control the lives of our young people and the future generations of our nation.

Most likely you have heard about a new drug called Gardasil® that purportedly immunizes young girls against human papilloma virus (HPV). Well, first it only works against four of 100 strains. Next, two of the four strains affected by this drug have been related to cervical cancer cases in this country. So this is a minimal drug affecting a small subset of viruses that are transmitted through sexual contact.

Thus if a young girl is not going to have sex, there is no reason for her to take the drug. According to the Centers for Disease Control and Prevention, less than one-third (31.3 percent) of all young girls under the age of 18 have engaged in sexual intercourse. If this is true, it means that Gardasil will be useless in almost 70 percent of teen girls because they will not be exposed to HPV.

Despite this, there is a major push across the United States to have Gardasil made mandatory for girls as young as nine. Why?

Before answering that question, let me take you through a bit of history.

In 1985, Planned Parenthood people were among the participants in an exercise that produced a document called Inventing the Future: Alternatives to Adolescent Pregnancy. The document was the result of creative thinking on the part of the participants on how they would want things to operate in the future. It was presented as a series of “visions.”

In one such “vision,” the participants described the development of “conception immunization” in the United States. The idea was that a drug would be developed for preteens so that they would be “immunized against pregnancy.” Here are some excerpts of the timeline foreseen by the participants:

Now all of this could be dismissed as flights of fantasy if it was not for the fact that there have been serious efforts to develop an immuno-contraceptive since the 1930’s. In 1973, some success was reported by K. Joshi in the American Journal of Pharmacy. In addition, a quick look at some of the developments since 1985 shows that this is, in fact, serious business.

At the International Conference on Population and Development held in Cairo, September 1994, the United States Department of State pledged that the U.S. would fund and conduct research on immuno-contraceptives.

In 1997, the European Society for Human Reproduction and Embryology reported that a human chorionic gonadotrophin (HCG) vaccine developed by Talwar was the first contraceptive vaccine to be clinically tested in the world and found to be safe for use in women. The first ever contraceptive vaccine to be tested in the male is the heterologous follicle stimulating hormone (FSH) vaccine developed by Moudgal et al., which has been proven to cause infertility in monkeys. Furthermore, phase one trials have purportedly shown that the vaccine does not cause any “ill effects” in men.

By 1999, the HCG vaccine had undergone human trials in Finland, Sweden, Chile, Brazil and the Dominican Republic and they were considered a success.

In 2002, the publication Trends in Immunology ran an article on the status of anti-fertility vaccines. This article clearly points out that any HCG vaccine would prevent implantation, not fertilization. The article also revealed that, currently, HCG is not given by itself, but is combined with either a tetanus or diphtheria shot. The article concluded with the following statement on the status of immuno-contraceptives: “The feasibility of using contraceptive vaccines in humans has been established, but issues remain regarding overall efficacy and general acceptability.”

So work on the “vision” is moving forward, but will it be accepted by the public?

This brings us back to the current situation with Gardasil.

Understand we are not against ethical vaccines that treat known diseases. But there are many questions about Gardasil. We believe a close look at this product will show that it does not live up to the media hype and certainly doesn’t warrant being made mandatory for every little girl in the country.

What’s even more alarming is the marketing that is taking place, the aggressiveness of the politicians and the complacency of the parents.

Perhaps you’ve seen Merck’s alluring “One Less” TV commercials with vibrant teenage or preteen girls saying, “Each year in the U.S., thousands of women learn they have cervical cancer. I could be one less… One less statistic… With Gardasil, you could be one less.” Meanwhile, the graphic reads, “For girls and young women ages 9 to 26.”

And it seems so benign. After all, who wants girls or young women to get cancer? But as mentioned above, the human papilloma viruses that are target of this vaccine are sexually transmitted. That means one cannot catch it through the air or by casual touching. It means young girls must engage in sexual activity in order to catch the viruses. Is Merck suggesting that parents condone sexual activity by their nine-year-old daughters?

Despite the fact that Planned Parenthood wants every one of our children involved in sexual activity, apparently only 31 percent of our young girls engage in sexual intercourse before they are 18 years old. Yet the drug company and politicians want to make this immunization mandatory for every girl entering sixth grade.

We can understand why the drug company wants to do this. It’s called profits. Merck stands to make billions of dollars in sales every year if Gardasil vaccinations at the price of $360 per child are made mandatory. Merck is funding the push for making the drug mandatory and we’re sure its stockholders are very happy. But what about the girls?

Initial media reports indicate that politicians are supporting this because of past and/or future political donations from drug companies. Governor Rick Perry of Texas (R) issued an executive order mandating that all girls entering sixth grade in Texas be immunized with Gardasil. Then news reporters found several ties between the governor and Merck. In February, the state legislature in Virginia became the first one in the country to pass a bill making this drug mandatory and Gov. Tim Kaine (D) signed it into law.

However, what about parents and average citizens? Surely they are outraged. Well, although some parent groups are expressing opposition, the majority just seems to be sitting back and watching what happens. Some parents even think it’s a good idea.

Of course, the background on all of this discussion is the “vision” of Planned Parenthood. It isn’t just coincidence that two Planned Parenthood affiliates in Michigan testified before the Senate Health Policy Committee in favor of mandatory vaccination of sixth grade girls with Gardasil. As so-called science marches relentlessly toward the day when it will be possible to inject teens with some kind of drug to prevent them from having a baby implant in their womb, the Gardasil episode is setting the foundation.

If the American public will accept mandates that all children must be given a series of shots to prevent a sexually transmitted disease, then it will be only a small step to mandate the immunization against conception, once technology makes that possible.

Please do not think it will stop there. When Planned Parenthood was founded by Margaret Sanger in 1916, there were three philosophies that permeated the organization: Uninhibited sex, birth control and eugenics.

Then comes the third philosophy of Planned Parenthood— eugenics. If nothing is done, we foresee the day when children are mandated to receive an immuno-contraceptive and then are eligible to receive a reversal drug—if and only if they pass certain tests. We’re sure the same people who will bring us the drugs, also will come up with physical and mental tests that must be passed by young men and women in order to receive the reversal shot. Only those considered “fit” will be allowed to marry and/or have children. This would be the eugenicists’ dream come true.

Some who read this article will say that we are paranoid. Some will claim that there is no way the American public would allow a situation where test results play into the determination of who does and does not have children. Yet just a few years ago, how many of these same people would have believed that the American public would allow the state to mandate that their children be immunized against a sexually transmitted disease?