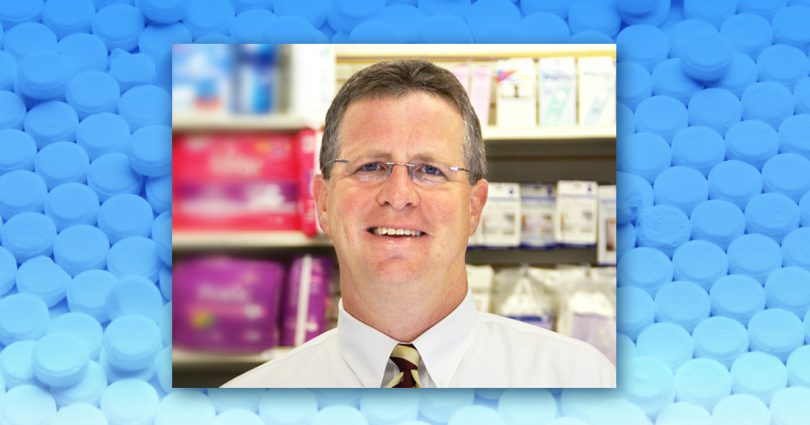 Catholic and other pro-life medical professionals are working in an ethical minefield today. Common practices in the medical industry conflict with the principles they hold sacred and inviolable. Mike Koelzer, a registered pharmacist, braved this difficult course as he worked in his family’s pharmacy and ultimately made the courageous choice to stop selling all contraceptives, despite criticism and objections from customers, colleagues and even family members.

A prick of conscience

While he was in pharmacy school at Purdue University, the fact that hormonal birth control methods can cause early abortions did not stand out to Koelzer. So, he was unaware of this when, after graduating in 1991, he started working at Kay Pharmacy, established by his grandfather in Grand Rapids, Michigan.

A few years later, Koelzer’s cousin called and happened to mention artificial birth control’s abortive properties. The information sent a shock wave through Koelzer’s perspective on the business. “I hoped it wasn’t true,” said Koelzer. “But I started doing research, reading up on the subject.”

His research proved that his cousin’s disturbing assertion was true—in fact, package inserts for hormonal contraceptives, including the pill, state that they work by preventing implantation. This takes place after fertilization and kills the developing child by keeping him or her from attaching to the wall of the mother’s uterus. Koelzer was now in a quandary. He and his father were co-owners of the pharmacy; thus the decision to stop selling them was not up to him alone.

Mike first proposed ceasing the sale of contraceptives to his father in 1998, during a weekend vacation. His father was not agreeable to the idea. “It was not a happy moment between us,” recalled Koelzer. “I could tell he didn’t want to hear it.”

His father’s dismissal of his proposal was not limited to mere displeasure upon hearing it. Two weeks later, Mike got a letter from his father listing nearly two dozen reasons why Kay Pharmacy should not stop selling contraceptives. “He told me that the pharmacy was not a Catholic or pro-life pharmacy, and we were not obliged to wave that banner,” Koelzer recalled.

Koelzer did not want to trump his father’s position as head of the business, but his concern over the pill’s abortive properties and his love for the Church and her teachings, including Humanae Vitae, were growing. He described his emotional experience during that time as “excruciating.” Not only did his father precede him in the family business, Koelzer had always considered him his mentor and hero.

The weight of the situation became too much to bear in 2001, when the Koelzers were building a new home and expecting a child. “I remember telling my wife, ‘I don’t want to build the house with blood money,’” he commented.

Koelzer discussed the policy again with his father over lunch, and his father reluctantly gave his approval for Mike to go through with his plan. “He told me, ‘I don’t agree with what you are doing, but you know you have to do this, and I support you,’” he recalled.

A threat to the status quo

In January 2002, Koelzer informed his employees and customers that Kay Pharmacy would stop filling prescriptions for birth control pills as of February 1.

Koelzer had to decide whether to stop filling all birth control prescriptions or keep filling them for those customers who were not using the pill for contraceptive purposes. Ultimately, he decided to stop selling all birth control so that his employees would not have to question the customers and also because a friend, who was an obgyn, pointed out there are other treatments for conditions for which the pill is currently prescribed, such as irregular menstrual cycles.

The response from his employees and customers was swift. Some employees questioned the viability of the business after making such a drastic change. Of the more than 200 customers who were getting their birth control prescriptions filled at Kay Pharmacy, many left. Some even likened the new policy to a grocery store deciding that it would no longer sell milk. The abusive phone calls, comments and letters continue to this day.

Kay Pharmacy has also caught the attention of the so-called mainstream media, as always occurs when the culture of death is seriously challenged. It has been covered by the Washington Post (June 16, 2008), ABC News (August 8, 2008) and USA Today (this past February 18).

In September, P.Z. Myers, the notorious biology professor who celebrated his desecration of a consecrated Communion host on his internet blog last July, unleashed his followers on Koelzer.

Koelzer remains unfazed by the hateful comments, which have included remarks such as “You should have been aborted.” “Once I made it through the ordeal of my father’s disapproval, no one else’s criticism mattered,” Koelzer explained. “It was all downhill from there.” A common theme Koelzer has identified is his critics’ failure to recognize that as a business owner, he has a right to set his own policies. “They say, ‘You’re taking our rights away. You’re a licensed professional,’” he reported. “But pharmacists are not required to dispense a medication. And there’s a patient that’s being harmed: the unborn [baby].”

Thriving with peace of mind

Despite the negative feedback and loss of customers, Kay Pharmacy has continued to thrive. Koelzer said he did not worry about the change, from a financial standpoint. To him, the new policy was not a choice, but something he had to change. “The business was no longer my concern,” said Koelzer. “If it’s wrong, it’s wrong, just like stealing and cheating.”

In his personal life, he and his wife, Margaret, have also exemplified the teachings of Humanae Vitae by generously welcoming nine children into the world.

Koelzer now travels the country, sharing the story of Kay Pharmacy and his wisdom about creating successful pro-life businesses. He is frequently interviewed on radio as well. For more information on his pro-life apostolate, visit www.prolifepharmacy.com, e-mail mike@kaypharmacy.com or call 616-901-8445.

In the moral domain, your federation is invited to address the issue of conscientious objection, which is a right your profession must recognize, permitting you not to collaborate either directly or indirectly by supplying products for the purpose of decisions that are clearly immoral such as, for example, abortion or euthanasia.

Pharmacists for Life president Karen Brauer told Our Sunday Visitor (January 18) that although it is not possible to determine exactly how many pro-life pharmacies there are in the U.S., growing numbers of pharmacists have stopped selling contraceptives, as awareness of their risks increases. “People change over time in how much they understand about the pill, and a lot of pharmacists are along that path, too,” she said. “A lot of them will dispense the regular birth control pills, but they will not dispense the ‘morning-after’ pill because it has too much of an abortive method, so they draw their line at that place… They are developing their understanding and probably sooner or later a whole lot of them are going to quit dispensing the pill, too.”

The Pharmacists for Life web site (PFLL.org) lists just six pro-life pharmacies (including Kay Pharmacy), but OSV reports that “Brauer said she is aware of many more that exist around the country. She suggested that customers can find other pharmacies in their area that have a pro-life approach through an Internet search. In many cases, she explained, the pharmacies have been the subject of local news stories or have garnered attention from prochoice groups such as Planned Parenthood and NARAL.”

One such example is Divine Mercy Care Pharmacy, which opened in Chantilly, Virginia, on October 21. It sells no birth control, tobacco or pornographic magazines, but does provide booklets on natural family planning. In response, NARAL Pro-Choice Virginia called for a boycott of pharmacies that do not fill birth control prescriptions.

“It won’t be just a Catholic pharmacy,” Dr. John Bruchalski, DMC’s president and chairman of the board, told the Washington Times (October 21, 2008). “It’s trying to build a culture of life.”