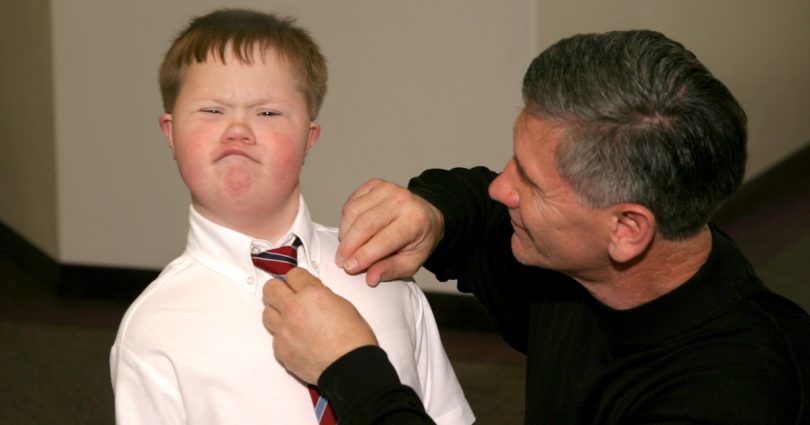 I don’t know how much he understands of his prayers. Regular guests at my parents’ table are accustomed to my youngest brother’s insistence on praying before each meal. Because Zachary rattles his prayers off at top speed, his speech, never easy to understand, becomes mostly incomprehensible. After Zachary’s enthusiastic “amen” my father usually provides a more intelligible blessing before eating commences. What he understands of them, or of God, I don’t know, but I do know that he is a blessing from God.

Of the four children in my family, I am the eldest. Nicholas, Isaiah and Zachary follow at one, nine and 10 years younger than I. My father is a small-town physician and my mother is a housewife and Bible study leader. But a list of the dramatis personae and the information that Zachary has Down syndrome cannot convey the dynamic of life in my family.

Whenever there is a birthday in the family Zachary maneuvers to be next to the cake so that he can blow out the candles, regardless of whose birthday it is. He no longer insists on helping open each present, though he still likes to. And he’s always especially delighted when the wrapping paper he’s tearing off covers gifts for him. He’s fond of Matchbox cars. One Christmas Nick bought him a pack of about 20 and wrapped each car individually. Christmas morning we all waited for quite some time as Zachary fumblingly unwrapped each, just as pleased with each new car as he had been with the last.

In the famous opening of Anna Karenina, Tolstoy asserted that “Happy families are all alike; every unhappy family is unhappy in its own way,” but I think it is quite the opposite. There is far less variety in selfishness than there is in charity and love.

Circumstances do not provide for happiness or unhappiness, as evidenced by the multitude of families miserable despite prosperity and those happy despite deprivation. The difference between a happy family and a wretched family does not arise from situation, but from the soul.

Many imagine themselves miserable if they had a disabled child in their family. My first reaction upon hearing that my new baby brother had Down syndrome was of sorrow for his sake—I thought he would surely have a hard time of life and vowed, in my young mind at age 10, to ease it at least a little by beating up anyone who would harass him. I needn’t have bothered. Zachary is remarkably happy and loved, not only by family, but by those he meets in church, school, soccer and tee-ball.

But when he was born, only the downside of his condition could be seen. We knew that his physical and mental development would be retarded and when most people think about disabled children that is where they end. Low IQ scores and delayed potty-training are easier to predict and understand than joy and love. Thus, when most people think of Down syndrome, they define it by the former and so in America a prenatal diagnosis of Down syndrome ends in abortion over 80 percent of the time.

It is human nature to plan and when people daydream of future children, grandchildren or even great grandchildren, many want them to be good-looking varsity athletes who ace the SAT and go on to professional success—our culture’s definition of the good life. We don’t want a child who is physically and mentally substandard and will need extra care.

For many, the determination to have the children they want, when they want them, is so strong that they will kill those who do not meet their standards. And so there is vast resource to contraception and abortion. In vitro fertilization, coupled with genetic screening, is now being used to produce “designer babies.” Americans don’t yet view children as commodities to be ordered from a magazine (or more likely an online store), but the cultural consensus is moving there.

This is an anti-Christ mentality; to declare that we ought to have full control over others’ entry into this world is to claim something that belongs to God alone. We are dependent creatures, reliant on God’s grace for our existence and hope of salvation; we have no right to demand that He comply with our demands regarding the children we are given. Furthermore, as Russell Kirk said, “Human reason set up a cross on Calvary, human reason set up the cup of hemlock, human reason was canonized in Nôtre Dame.” Indeed human reason minus grace crucified Christ, martyred Socrates and waged the French Revolution. Yet reliance on God produces much better results than playing God.

Above and beyond toleration

No one in my family asked for a disabled son or brother. But God gave us one and my parents were not going to abort him, institutionalize him, give him up for adoption or halfheartedly care for him. Instead they led the family in loving and welcoming him. In return he’s enriched our lives in ways that another “normal” person wouldn’t have.

It is common to say that caring for the disabled teaches patience and it’s true that Zachary has provided plenty of training in that and related virtues. But I find the usual emphasis on this disconcerting, for it wrongly implies that the main benefit we gain from the disabled is that of learning to put up with unwelcome things.

Zachary does not exist just so that we will learn to endure the unpleasant. He is, in fact, more pleasant than most people. People like Zachary remind us of what is important—and it isn’t MCAT scores or a pay raise. It’s love.

It’s love when Zachary rushes to the door to greet my father as he returns from work. It’s love when my mother takes the time to read with him. It’s love when I call home to Oregon and he always demands to talk to me. It’s love in the capers he cuts, the smiles and hugs he gives and the habits we indulge (like his prayer before each meal).

Sometimes raising him has been difficult when combined with my mother’s frequent health problems plus my father’s weariness from delivering babies in the middle of the night and working at an often understaffed clinic. And like all families, mine is composed of fallen humans prone to sin. These failings are predictable, but grace and love are there to cover a multitude of sins and move mountains of hardship. My family’s situation is more than a reckoning of our blessings and burdens; love does not calculate in such terms.

When asked to explain why we love someone, it is often impossible. We may point to the good qualities of the beloved, or to good the beloved does to us, but these are usually inadequate. Love, when it is closest to that godly love agape, is giving and cannot be simply a sum of regard for the deserving qualities of the beloved. Like all children, Zachary can be trying at times, but he is quite loveable. For example, in efforts to copy his older brother he would frequently appropriate Isaiah’s sports jerseys. But he was loved before he had done anything cute or adorable; he was loved simply because he was a son and a brother.

When Zachary was younger, we nicknamed him “Houdini” for his frequent foiling of our efforts to corral him with various gates designed to childproof homes. This tendency has led to many escapades, some humorous, some terrifying, some both (with humor usually coming in retrospect). For instance, one morning last summer my parents were away. Therefore, my brother Nick and his wife were watching the younger children at my parents’ house. Zachary woke very early, dressed and decided to walk to the fire station. He unlocked and went out the front door without waking Nick and Hanna, who were sleeping nearby, and made it a quarter-mile down the road before getting picked up and brought back home. There was much consternation when he was returned and while it was funny—who but Zachary would decide to walk to the fire station at five in the morning? It illustrated the terrifying precariousness of love.

“To love,” C.S. Lewis noted, “is to be vulnerable. Love anything and your heart will certainly be wrung and possibly be broken.” We’re extra-protective of Zachary, but we can’t shield him from everything and attachment to other people requires allowing ourselves to be hurt by them and by things done to them.

Zachary had a health problem common to people with Down syndrome. I remember when at two and a half years of age he underwent open heart surgery to repair a hole in his heart. It was a wrench to say goodbye to him before he went to that possibly fatal surgery and seeing him afterwards was grim. He had survived, but the sight of his little body covered with tubes and needles and the great incision on his chest stitched shut only emphasized how helpless he was. To this day, a massive scar on his chest reminds us that love requires accepting imperfection and hurt.

The upside of Down syndrome begins when parents learn that their baby has it and decide to love and care anyway, rather than getting an abortion or sending the child to an institution. Without this love, nothing beneficial can be seen in Down syndrome or any other disability. People who measure the worth of their son or daughter based on IQ scores, report cards and varsity letters will never be able to understand this because they are devoid of a proper parental love, let alone a godly love. In contrast, families who know that a disabled child also bears the imago Dei will accept and love that child and in doing so will find a joy that conquers hardship.