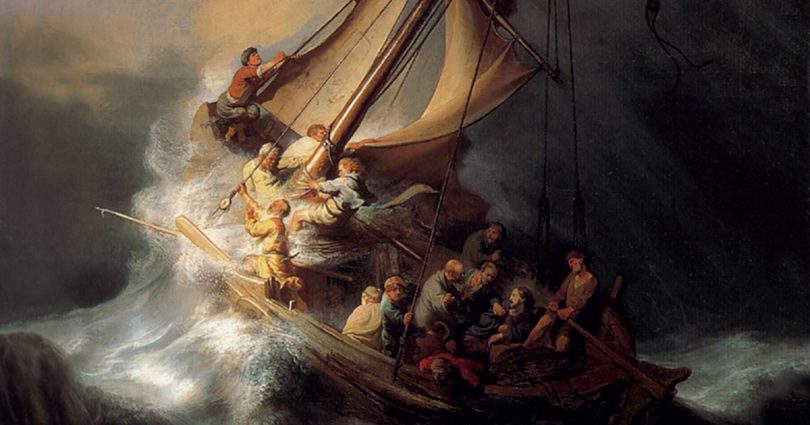 Hurricane season 2008. Everyone who lives on the East Coast knows that tropical storms and hurricanes can suddenly make a calm summer fierce. But if you live 100 miles inland, is it possible to still be battered in a “storm at sea”?

My answer came on Sunday, August 31, 2008. I was wrapping up a retreat I directed that weekend. Its theme was “The Storm at Sea,” and I incorporated the story we find in Saint Mark’s Gospel (4:35–41). In that Gospel, we read that Jesus is in a boat with His disciples and the boat is being tossed about in a storm. Jesus awakens from sleep to find His disciples frightened and panicked. He then calms the storm and calms their fears.

This story is depicted well in Rembrandt’s The Storm on the Sea of Galilee, a print of which was shown to the retreatants. In this painting, you see two groups of disciples. First, there’s a group of disciples panicking as they try to save the boat. Then, in the rear of the boat, there’s a group sitting with Jesus, and these men are completely calm—even though they’re in the same storm-tossed boat. They weathered the storm by keeping their focus on Jesus.

I never thought I would need that message. I figured it was a “cute” theme for a retreat, and while I believed in that Gospel’s message, it was a theme that was meant for those attending the retreat, not for the retreat master.

Not only did I need that message myself—I needed it that day.

My wife and I were expecting our first baby. We did what most expectant couples do: We tracked the baby’s size, thought of names, and started decorating his or her room. Days turned to weeks, and weeks to months, and now our little baby had grown from just a cell to the size of a piece of fruit—so small, but so loved.

Our storm began on August 31, with signs that something was wrong with our pregnancy. As much as we willed to keep our baby, over the next two days it became apparent it wasn’t going to happen. Early on the morning of Wednesday, September 3, Deanna delivered our baby boy, Matthew Sean. He had only been in her womb for 14 weeks, which wasn’t long enough for him to survive outside of her womb.

I don’t recall feeling such dread before in my life. Today, I think back and wonder if that’s how Mary, Jesus’ mother, felt as she watched her Son suffer and die—knowing there was nothing she could do. My pain was intense, but the feeling that my heart had been ripped out of my chest couldn’t have compared to the pain my wife felt.

But then, we were given a gift many moms and dads never receive: We were given the chance to hold our baby. I’ll never forget the feeling of my wife placing Matthew’s body, now wrapped in a small piece of cloth, in my hands. His tiny body fit into one hand, with room to spare. In those few seconds, the bond with my son took root and grew.

We made it very clear to the nursing staff that Matthew was to be treated with the utmost respect and dignity. I’m usually not the type of person to demand anything from anyone, but this situation was entirely different. This was our son, and although his tiny body no longer held life within it, I was going to protect him in the only way I could, which meant anyone who held him would do so with care. After a local priest baptized our son, the nursing staff took him away, handling him with a loving and gentle touch. Days later, we buried our baby boy.

In the coming days and weeks, our storm at sea slowly calmed. There have been ups and downs since those days, but Deanna and I are sure God had a reason for calling our son back to Himself. We also know that God has been with us during this storm at sea. In fact, He sent us a couple of reminders over the next year.

While each holiday since then has been painful because we wonder what it would have been like to have Matthew with us, there was one holiday I dreaded even more than the rest: Father’s Day 2009. It took perseverance for me to get through the beginning part of Mass that day. I could see all of the dads around me with their babies, and I felt empty. Mass progressed and I went through the prayers, but the whole time I was thinking that my son should have been with me. Then came this message from God: “It’s OK, Mike; he’s here with Me, and we’re with you.” While I didn’t hear those words, I didn’t have to, because when the deacon stood up to read the Gospel, he read the Gospel account that had become my strength. He read “The Storm at Sea.”

As if that weren’t enough, a few months later, Deanna and I went on a pilgrimage to Rome, Italy, with about 200 other people, including Archbishop Timothy Dolan of New York City. During the pilgrimage, my wife and I were inspired to write personal notes to Archbishop Dolan and our Holy Father, Pope Benedict XVI. We wanted to share our baby’s story and thank them for fighting for the lives of all preborn babies. Later that day, we were able to attend Mass with the archbishop. The Gospel proclaimed during that Mass? “The Storm at Sea.”

Transforming grief into helping others

Deanna and I aren’t sure why our baby wasn’t able to stay with us, but we know where he is. He’s with God, and someday we hope to embrace him again. In the meantime, we take comfort in knowing our little boy’s death will bring healing to moms and dads who have suffered as we have.

In 2009, Deanna and I developed the concept of the Shrine of the Holy Innocents, a shrine dedicated to honoring miscarried babies. Since then, we’ve put together a board of directors that includes women and men who have fought for preborn babies’ right to life. We have married couples and singles, as well as our local bishop (New York Auxiliary Bishop Dominick Lagonegro) serving on our board. One day, we hope to have a shrine where moms and dads can bury the remains of their babies, giving their babies the dignity they so much deserve.

I have to admit I’d rather have my son with me, but as long as we can’t be with each other, I’m proud that he’s helping to bring healing into this world he so briefly knew.

“Why, My child, do you ask why? Well, I will tell you why. You see, the child lives. Instead of the wind, he hears the sound of angels singing before My throne. Instead of the beauty that passes, he sees everlasting Beauty—he sees My face. He was created and lived a short time so that he, who has the image of his parents imprinted on his face, may stand before Me as their personal intercessor. He knows secrets of heaven unknown to men on earth. He laughs with a special joy that only the innocent possess. My ways are not the ways of man. I create for My Kingdom, and each creature fills a place in that Kingdom that could not be filled by another. He was created for My joy and his parents’ merits. He has never seen pain or sin. He has never felt hunger or pain. I breathed a soul into a seed, made it grow, and called it forth.”

I am humbled before You, my Lord, for questioning Your wisdom, goodness, and love. I speak as a fool—forgive me. I acknowledge Your sovereign rights over life and death. I thank You for the life that began for so short a time to enjoy so long an eternity.

Michael Sweeney writes from Saugerties, New York, where he lives with Deanna, his wife of six years. They’re active in their parish’s music ministry and have assisted with religious education programs. Mike and the Board of Directors of the Shrine of the Holy Innocents continue working on plans for the shrine, which will likely open in 2012 in Kingston, New York, and later in other locations.