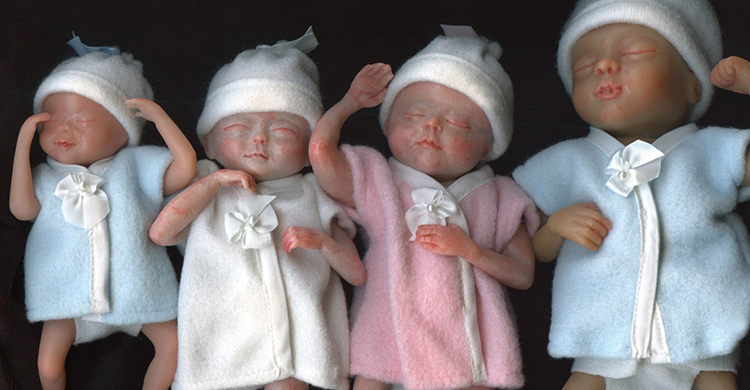 “Catherine, I’m sorry, but you’ve miscarried again,” Catherine Jacobs’s doctor told her in 1994. “We need to do a dilation and curettage.”

Just three months before, Catherine had suffered a miscarriage, and now her doctor was giving her that heart-breaking news for the second time.

“The Holy Spirit spoke to me and told me not to allow the D&C,” Catherine said. “Instead, I had an ultrasound, which showed that I was carrying twins, but that I had placenta previa.”

The doctor advised Catherine to abort one of the twins to give the other a better chance of survival. Catherine refused and was sent home on bed rest.

For many years, Catherine had worked as an elementary school art teacher, but now, she was unable to work because of the pregnancy complications. “My daughters were two and four at that time, and I wanted to show them what the babies in my tummy looked like, so I began to research fetal development,” Catherine said. “Then I sculpted life-sized models of my tiny babies.”

Catherine also sculpted a model of the baby she had miscarried. “It helped me to heal by honoring that life,” she said.

The pregnancy progressed until Catherine’s water broke at 31 weeks’ gestation. Doctors kept her in the hospital on bed rest to try to give her twins more time to develop. “At the hospital, I was very fearful that my twins were coming too early and wouldn’t survive,” Catherine said. “A kind nurse wheeled me into the NICU and showed me a baby who had been born at 24 weeks’ gestation. That baby had weighed just one pound at birth, and now, he was getting ready to go home. That’s when I knew my babies would be all right.”

Catherine’s twin boys were born healthy one week later. But even after she took her miracle babies home, she couldn’t stop thinking about that baby at the hospital. “It broke my heart to realize that at that time, that precious baby could have been aborted legally in New York, no questions asked,” Catherine said.

From contest to ministry

Catherine sculpted a life-sized doll of that baby and entered it into an international doll contest in Ontario, Canada. “I won a first-place ribbon,” she said, “and after the contest, when I picked up the doll, there was a note pinned to it.” The note was from a grandmother, requesting that Catherine make two dolls for her, to symbolize her twin grandbabies who had recently passed away. “She wanted to hold the dolls and rock them. She thought it would help her grieve,” Catherine said. “Her note made me realize what God wanted me to do.”

Catherine’s unique ministry, which she calls “God’s Little Ones,” had begun.

For the past few years, Catherine had volunteered as a counselor for her local pregnancy resource center. “I made a set of models of babies at each gestational week, and I showed them to the clients I worked with,” she said. “It helped them to realize that they were carrying a baby, not just a mass of cells. They had a real impact.”

Catherine began taking her dolls to her county fair for their right-to-life display. “My dolls have been displayed there every year for the past 23 years,” she said. “Thousands of parents have held the babies and grieved for little ones they’ve lost through miscarriage or abortion. I know for sure that they helped save at least one life.”

Ten years ago, a grandmother named Sharon brought her pregnant granddaughter to the fair. They stopped to look at Catherine’s dolls and talk to the volunteer. That day, after holding a model of a baby, that young girl decided to carry her baby. Last summer, Catherine had the honor of meeting that young girl’s son. “I handed him a balloon, and suddenly, God told me who he was,” she said. “I’m so thankful that I got to meet him.”

Catherine’s models have been on display at the fund-raising banquet for her local pregnancy resource center, and they have even been commissioned to prove personhood in a court of law. “I don’t know the details of the cases, but several times, I’ve created a model to represent an actual baby in a court case,” she said.

An Inuit tribe in Canada ordered 1,800 of Catherine’s dolls for an educational program to teach pregnant women about fetal development and the dangers of drinking alcohol while pregnant. A doctor took several of her dolls to Africa to teach mothers of premature babies about kangaroo care. A film crew from South Korea made a movie about Catherine’s dolls, hoping to prevent abortions in their country.

Ten years ago, Catherine had a display at the National Perinatal Bereavement Conference in Las Vegas. “Parents were able to hold the dolls and heal,” she said. “There was a nurse there who used to help doctors perform abortions. Seeing my display changed her heart.” Catherine sees the importance of putting clothes on her dolls. “It makes them human and proves that they represent real babies,” she said. “You can’t put clothes on a mass of cells, but you can on a baby.”

God works all things for the good

But not everyone likes what Catherine is doing. Jane Magazine ran a spoof ad using photos from Catherine’s website. “That’s okay because God used it for good,” she said. “A woman who’d had an abortion saw the ad and contacted me, requesting that I make her a memorial doll to help her grieve her loss.”

Over the last 23 years, Catherine has made more than 5,000 dolls at various gestational ages. They have been used as dolls to help parents heal from miscarriage and abortion, as models to educate in prenatal and pro-life settings, and they even saved a life.

Catherine’s greatest desire is to get her models into the public schools. “I created them to teach my own daughters what their baby brothers looked like in the womb, and now, I want all children to see the miracle of life,” she said.

Diane Stark is a wife, mother of five, and freelance writer. Her work has been published in a variety of secular and Christian magazines, and she currently works as a contributing editor for Guideposts Magazine. Diane writes about the important things in life: her family and her faith.