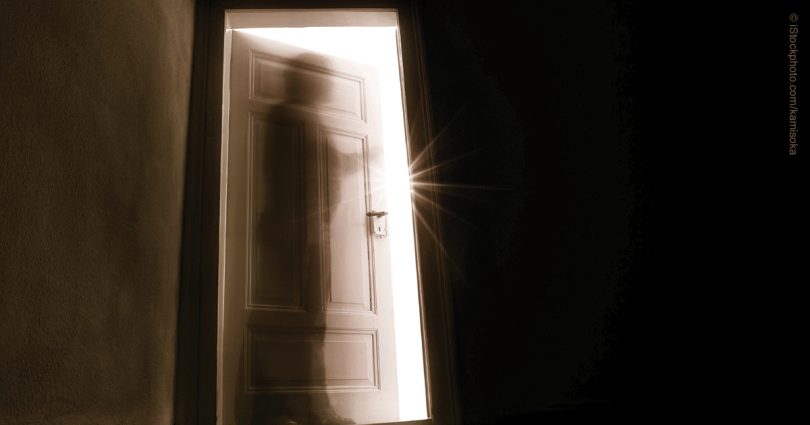 Editor’s note: This eloquent testimony to the value and meaning of suffering and death also reminds us that November is the Month of the Holy Souls in Purgatory, and we must pray for our brethren who comprise the Church Suffering within the Mystical Body of Christ (see sections 1030’1032 of the Catechism of the Catholic Church).

I couldn’t bear to look at her—or to look away. I watched her, wondering how long she could suffer like this and still evade death. My 69-year-old mother was dying from breast cancer that had spread to her bones and major organs. Watching her on her deathbed, struggling for breath, I realized (and am still coming to understand) that her suffering had meaning.

My mom and I were very close. She was my best friend. Before I moved from Iowa to Idaho two years ago, we saw each other almost every day. After I left, we talked several times a week on the phone. Last July, the summer before she died, I went back to Iowa to care for her for a month. I saw that things were dire; she was a mere skeleton resting day and night on the couch. She had a lot of back pain, so I would rub her back before she fell asleep. Afterwards I would lie staring at the darkness into the wee hours, thinking about the numerous lumps protruding from her body. I was particularly disturbed by the growing golf ball-sized one on the back of her head. My heart ached for her, and I was consumed with worry.

Somehow, I still had hope that she would live—God might grant us a miracle. I felt optimistic that she would live through the year, so my family and I returned to our home in Idaho in August. We had plans to come back to Iowa for Christmas.

A month later, during one of our phone calls, I realized she would be leaving us sooner than I had expected. But I had no idea how much sooner. In the past, no matter what her health problems were, Mom had sounded deceptively strong on the phone. When I heard her sound normal, I could convince myself that everything was actually okay. But now I could hear the weakness of her body in her voice, and I could no longer deny reality. My four children and I flew home again.

On the morning we returned to Iowa, my two young children were sitting on my mom’s bed while the three of them had a good time doodling (Mom was an excellent artist). I was prepared to stay and take care of their grandma for months. Her frail body was attached to an oxygen machine, but she was in good spirits. Whenever she needed us, she would ring a bell. More than once, she talked about the possibility of getting better. She still had hope. I wouldn’t have believed she was only seven days away from her departure from this life to the eternal one.

A few days later, she allowed me to see her cancerous breast for the first time, because the hospice nurse requested that I learn how to dress her wound. Before then, Mom had never wanted me to see it. She was a private person, and she’d wanted to keep me from being sickened by the sight of what her breast had become in the end stages of cancer. When the nurse lifted her gown, I was not disgusted. Instead, my whole being wept at the sight of the gruesome wound that made her breast unrecognizable. I wept for the months my mother had suffered from such a wound without consolation from any of her family.

I knew she had cancer, but it wasn’t until the last week of her life that I truly understood the extent and the duration of her sufferings. Those days were the longest of my life. Mom’s condition deteriorated quickly, and I was caring for her as if she were an infant. She knew she was going to die, but she couldn’t accept it. She was afraid; I could see that she was suffering in mind and body.

Watching her misery was torture for all of her family. My father, my siblings, and my eldest daughter, Ella, and I would sit with her day and night. She was afraid to be alone, and we were afraid to leave her alone—lest she die alone. She was no longer drinking liquids and her breathing was labored. As if in a trance, I would hold my own breath, counting the number of seconds that she stopped breathing before she’d begin again. This helpless woman didn’t resemble the mother I used to know.

My mom had been an attractive woman, and both physically and emotionally strong. She rarely cried before she had cancer. I often marveled at her physical strength. She was robust up until a year and a half before she died. She did everything: she had a huge garden, cooked everything from scratch, and took care of the yard and home. And she still found time to help her children. She was renowned for her delicious homemade bread, and in the year before we moved to Idaho, I fondly recall her delivering fresh baked bread to me at 9:00 p.m. so that my kids could enjoy a bedtime snack. Only weeks before she died, my eldest brother found her trying to make him some lunch, slowly pushing her walker around the kitchen. She could barely take care of herself, but she was still trying to cook for him.

Watching her die made me contemplate my own death. It made me objectively take stock of my life; it allowed me to clearly put my life in perspective. I could see that nothing mattered as much as the people around me—that I had spent too much time worrying about trivial things and material affairs. It also reminded me that I needed to be praying daily for the dying. “[I]f you would do an act that would endear you to your Lord, pray for the dying, suffer for the dying, work for the dying! Today they need your prayers; tomorrow will be too late,” exclaims Venerable Mother Mary Potter (1847’1913) in her invaluable book called Devotion for the Dying.

I can hardly think of the dying without also recalling the souls in purgatory. I have always felt drawn to the devotion of praying for the suffering souls. Mom told me several times in her lifetime that she wanted her family and friends to pray for her when she died, and not to assume she was in heaven. “We must say many prayers for the souls of the faithful departed, for one must be so pure to enter heaven” (Saint John Vianney).

On the afternoon of her death, Mom’s eyes suddenly flew open around 3:00 p.m., the time when Christ died and thus the hour of Divine Mercy. I knew instantly, by their far-off, vacant look, that these were my last moments with her. I’m still haunted by those eyes. She looked as if she were seeing both all and nothing simultaneously. Within minutes, each of my four siblings, my eldest daughter, my father, and I were gathered around her bed, fervently praying the Rosary. We finished and started the Divine Mercy Chaplet when Mom took her last belabored breath. Dad, remembering an old Czech tradition passed down by his ancestors, opened the door to the outside to free her soul. The door slammed shut, and I released my mother’s hand. Never again would I touch it in this life. And I so much wanted to make sure I would deserve to hold it close in the next life.

The graces of God’s timing

At first glance, one may think that Sharon Hadacek’s prolonged agony was meaningless, but I can see now that if her life had been ended before God’s time, then we would have been denied God’s gifts—His graces. Before, there had been division amongst us. Our family had experienced growing pains with three marriages in two years’ time and 11 grandbabies in seven years.

Mom’s death resulted in fences—figurative and literal—being torn down. The morning after she died, my father removed the tall fence that had been erected to block access to a driveway that connected his property to my brother’s. That fence was symbolic of all that was wrong in our family. I wish that this could have happened without her illness and death, but I’m not sure that it would have. “At the hour of your death, you will see that you have saved more souls by your illness than by all the good works you might have accomplished in health” (Saint John Vianney).

Mom’s suffering and death served to call her spouse, her children and their spouses, and her grandchildren closer to the Lord and to each other. Her end of life was beautiful and holy to us—even in the midst of our grief. As C.S. Lewis said, “God whispers to us in our pleasures, speaks to us in our conscience, but shouts in our pains: It is His megaphone to rouse a deaf world.”

A Prayer for the Dying

Most merciful Jesus, Lover of souls, I pray Thee, by the agony of Thy most sacred heart and by the sorrows of Thine immaculate mother, to wash in Thy most precious blood the sinners of the world who are now in their agony and who will die today. Heart of Jesus, once in agony, have mercy on the dying. Amen.