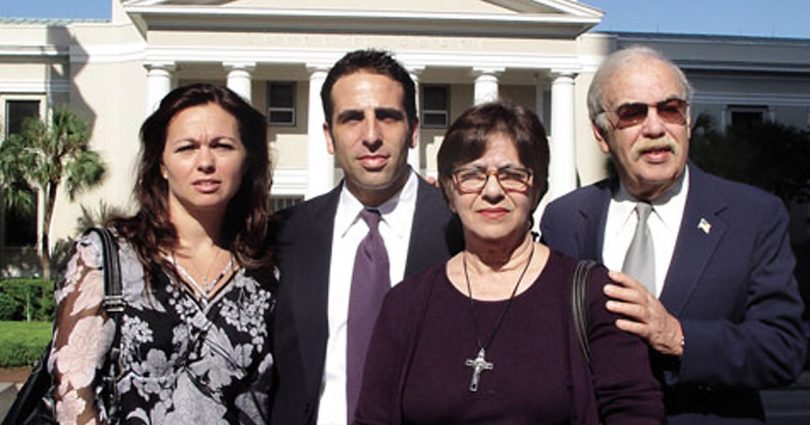 From Terri’s Schiavo’s collapse on February 25, 1990 to her hastened death on March 31, 2005, the Schindler family learned several lifetimes’ worth of lessons about love and loss.

Terri’s parents, Robert and Mary Schindler; her brother, Bobby Schindler; and her sister, Suzanne Vitadamo; never stopped fighting for Terri’s protection. Although they ultimately lost the battle to save her life, they gained an unparalleled conviction of the need to fight for disabled people in peril.

The experience motivated both of her siblings to leave their professions—Bobby as a Catholic high school teacher and Suzanne as a stockbroker—to devote themselves full-time to assisting vulnerable persons threatened by euthanasia. “Terri’s life changed our lives in so many ways,” Suzanne explained in an interview she and Bobby recently granted to Celebrate Life. “It really opened our eyes to what is happening to disabled people across the country. We don’t know why Terri’s case received the public attention that it did, but we are taking what we learned through our family’s tragedy and helping other people like Terri.”

The focus of the Terri Schindler Schiavo Foundation (established in 2001 and based in St. Petersburg, Florida) has thus shifted from fighting to save Terri’s life to helping other families. “Even with a disabled sister, I didn’t realize the discrimination against people with disabilities and the blatant disregard for human life,” Suzanne continued. “Through Terri and now through the work of the foundation, I see our disabled community in an entirely different light. The greatest reward comes when we are able to help a family save their loved one from a dehydration death. Knowing we can help to save one life is worth it.”

The foundation’s staff, consisting of Bobby, Suzanne and Mary, works to enlighten the public about the growing threat of euthanasia, and serves vulnerable patients and their families directly by providing advice, referrals, moral support and, in some cases,in-person visits. Bobby also travels nationwide and abroad to raise awareness by sharing Terri’s story.

The Schindlers faced yet more heartache with the passing of their father, Robert, last August. “My dad was truly the patriarch of our family,” Suzanne commented. “In so many ways, he was Terri’s Foundation. He brought wisdom, knowledge and heart to this effort, and it has been a tremendous struggle without him.”

The Schindlers are persevering, despite Robert’s absence, and even hope to expand the foundation’s mission by eventually creating a medical safe haven for patients whose lives are threatened by policies of other health care facilities. “There is a prevailing attitude toward the elderly, chronically ill and disabled that says they are not worth protecting,” Bobby lamented. “A profound prejudice exists against people like Terri, which leads to the devaluation of life and to life-threatening situations. That is when families come to us for help.”

The foundation has communicated with and supported over 1,000 families nationwide that are seeking guidance. “We see many families battling institutions that are threatening to end the care of their loved one,” said Suzanne. “We do what we can to assist the family in trying to have the patient moved to another facility or trying to connect them with attorneys.”

The foundation is currently involved in the Gary Harvey case. Gary became disabled in January 2006 and could face a fate similar to Terri’s if he is not removed from a government guardianship and allowed to return home to his wife, Sara, for care. The Schindlers have offered support and have traveled to New York to visit the Harveys.

The Schindlers also assisted the parents of Jesse Ramirez as they fought to save their son, who suffered severe injuries in a May 2007 car accident. Suzanne recounted, “Just days into his recovery, Jesse’s wife was ready to have his feeding tube pulled, but his parents fought her efforts and were able to restore his basic care.” Jesse recovered and walked out of a rehabilitation center in October 2007.

The ordeal inspired Arizona’s legislature to enact Jesse’s Law in 2008, making it possible to obtain an emergency order preventing a surrogate decision maker from denying food and water to an incapacitated patient. Ramirez family members wrote the following to the Schindlers: “Your family planted the seed for our family to fight for our loved one Jesse Ramirez, Jr. We honestly feel your foundation is the reason our brother is alive!”

Another of the many testimonials on the foundation’s web site states, “I can state unequivocally that were it not for Bobby Schindler and Terri’s Foundation, my cousin, Janet Rivera, would most likely not be alive today. It was through Terri’s Foundation that I found an excellent lawyer to negotiate with the County of Fresno [California] to discontinue the euthanasia of Janet [in 2008], which, as her conservator, they were intent upon carrying out.”

While Terri’s death certainly increased awareness of end-of-life matters, the risk to the vulnerable remains a stark reality, as Bobby explained:

Following Terri’s death, there was a strong push for people to sign a living will or [other]advance directive. But these documents can be very dangerous if the language is not fully understood. People don’t realize that simple food and water is now considered artificial life support. We need to educate the public on the facts. There is so much confusion about this issue—especially in Terri’s case. She had a profound brain injury but had healthy organs,was not on machines, was not in a coma and was not brain dead. She simply needed care. People must realize that this can happen to any family. This issue doesn’t discriminate.

One of the greatest threats to the disabled community is ethics committees, which can decide the fate of individuals in hospitals and other health care facilities. “These ethics committees really are death panels,” Bobby emphasized. “We may not want to discuss them, but they do exist and the power they hold is chilling. They unilaterally make decisions.” With the passage of the controversial health care reform bill, Bobby fears that such committees will become even more prevalent and more powerful: “We currently have an administration that surrounds itself with individuals who do not value human life. How can it not get worse with any form of government-run health care?”

President Obama inflicted a personal wound on the Schindler family during debates in both 2007 and 2008, when he referred to his 2005 U.S. Senate vote to intervene on Terri’s behalf as the “biggest mistake” he had made politically. “My parents were really hurt by his comments,” Bobby reported. “However, they weren’t surprised.”

The Schindlers have come to expect attacks on themselves, but they are sickened when the attacks are aimed directly at Terri. On March 21, Fox TV’s vulgar The Family Guy aired an episode mocking her death and describing her as a “vegetable” and “mashed-potato brains.” The foundation is now gathering signatures on a petition requesting that the show’s advertisers drop their sponsorship. “It really makes you question how our society has become so nasty and mean-spirited,” Bobby reflected. “The message is that people like Terri are less than human and have no worth. All these individuals need is the love of others to live, and [yet] they are made out to be monsters.” Bobby hopes that, at the least, the petition drive will raise awareness of the senseless denigration of the disabled.

Hope for the future

Despite the many challenges they have faced, the Schindlers have also seen tremendous growth in their mission. To honor the five year anniversary of Terri’s death, the foundation hosted the first ever Terri Schiavo Life & Hope Concert. The event, held in Indianapolis on April 11, featured country music stars Randy Travis and Collin Raye, and was attended by numerous pro-life leaders. “It was really a memorable night, and it was all because of Terri,” said Bobby. “The goal was to raise financial support for the foundation, but also to raise awareness about [threats to the lives of the disabled and infirm]. We hope to make this concert an annual celebration and hold it at different locations across the country.”

On March 31, Ave Maria University in Naples, Florida, hosted the second annual national Mass for Terri’s Day, which was established by the foundation and Priests for Life two years ago to foster education, prayer, activism and advocacy on behalf of the disabled. Among the many concelebrants were Father Frank Pavone, executive director of Priests for Life, and Father Tom Euteneuer, president of Human Life International.

These memorials demonstrate that Terri did not die in vain, and that her legacy lives on and serves as inspiration for the entire pro-life movement. In Suzanne’s words, “The more awareness we can raise by educating people on Terri’s story and countless others like hers, the more families will be spared heartache and more lives will be saved.”