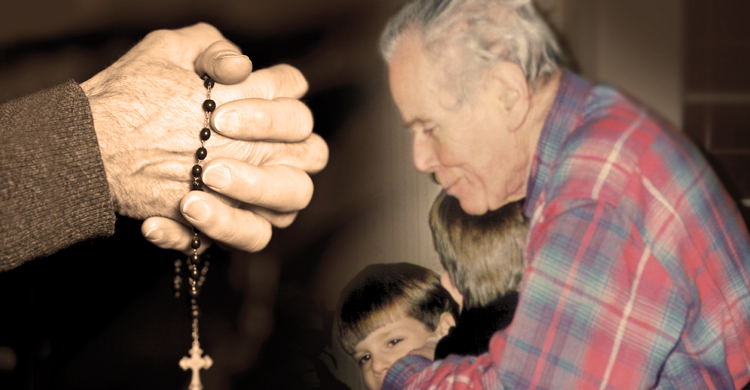 Hey, Dad, I’m here to take you to my house for the weekend.”

My father looked up from his rosary beads to see me, his youngest daughter, standing over him with his suitcase in my hands. My mother had been called away suddenly to attend to a family member who lived out of state. Although my dad had visited often, he had never stayed overnight at my house. He was a little nervous; I was very apprehensive. Mom didn’t have time to verse me in the day-to-day caretaking of my father.

This was the turn of the new millennium and my parents were in their 80s. My mother had the health and energy of someone half her age but my father was becoming more disabled. Hearing aids helped somewhat, but his vision was poor. He had been diagnosed with early-stage Alzheimer’s and walking was difficult, mostly because of his artificial leg from a battlefield injury.

During World War II, my dad was stationed in France. One morning he woke up when shots rang out. He felt a searing pain in his upper thigh, but didn’t think much of it until his friend yelled through the din, “Gus, you’ve been shot!” My dad looked at his leg and saw blood. The next thing he remembered was being removed from the foxhole on a stretcher. His good friend bade him goodbye and wished him well.

My father wasn’t expected to live through that night, but he proved the army doctors wrong by not only surviving the first twenty-four hours, but by living for many more decades. Though he had to have his injured leg amputated, and the original artificial limb was heavy and wooden, he managed to drive a car and walk with hardly a limp for many years. It was only in later years that he required a walker for his lack of balance.

That day I picked up Dad. Carrying his pillow, suitcase, and the small electronic keyboard that he loved to play, we slowly made our way to my car. I took a deep breath and managed to help him into the front seat, placing his gray metal walker and the rest of his things into the back seat and trunk.

We drove through the streets of the town where I lived. The look of fear in both our eyes must have been a sight. Mine was the fear of wanting my dad to be okay and not hurt himself in his new surroundings; his was the fear of the unknown. While we drove, I silently prayed for help and guidance.

My sons, Matthew, who was 12 at the time, and Michael, who was 10, met their grandfather at the door with open arms; well, at least half open arms, since they were also holding containers of juice and a few cookies, eagerly offering some to their grandfather. My husband brought in my father’s suitcase and keyboard and we settled in.

My dad clanked his walker through each room, inspecting everything his weakening eyes were able to see. He slept downstairs on a sofa bed, with the bathroom nearby.

We all pitched in helping my dad to change at night, taking off his artificial leg, and making sure that he was tucked in tightly.

In the mornings, we learned together how to put the prosthesis back on and help him out of bed. I found that, when standing and facing my dad with my knees slightly bent and with my arms fully extended under his underarms, I could lift him without hurting him or me, though this took the better part of an hour that first day.

With much laughter at our foibles, I began to relax. And so did Dad. We all sat down to breakfast where my sons delightfully discovered that their grandfather loved the same cereals as they did.

Over the next few days, my father saw that there was never a dull moment in our household. The phone rang incessantly, his grandchildren quarreled loudly and laughed just as loudly, and my dad merrily joined in. Hugs were frequent and randomly given. Each night, when we sat down to dinner to thank God for the abundance of food we were about to share, we also gave thanks for the opportunity to have my dad with us.

The conversation at the table ran the gamut from today’s technological advances, which boggled my father’s mind, to my father’s past when he saw Thomas Edison walking down a street in West Orange, New Jersey. The boys and my father mutually enlightened each other with their experiences. We included my dad in our evening table discussion of naming the best thing that happened to each of us that day. Unanimously, the best thing was having my dad stay with us for the weekend.

By Sunday afternoon, my father was so happy. He was even singing Christmas songs, though it was far from December. His fingers flew over his keyboard remembering different tunes from the deep recesses of his mind.

His stay with us came to a close all too suddenly. At first, my father was excited when it was time to pack his rosary beads and keyboard, and take him home, as he missed my mother.

But as he was leaving, it was not just I, my husband, and our two sons who were close to tears. My father’s eyes were moist also. He said he truly enjoyed the ongoing activity in my house and I knew that he also gained something by staying with us. He realized that, even though his usual caretaker, his wonderful wife, hadn’t been there, he had us to love him and care for him always.

As for my sons, my husband, and me, what we learned was priceless: No matter what, love with a dose of humor and abundant faith in God’s divine guidance can help ease any of life’s adjustments that come our way.

Dad passed away a short time after those wonderful days spent with him. Our hearts are still heavy, but we know that our weekend with Dad was a true gift from Heaven.

Anne Skalitza is a freelance writer. She taught second grade in her parish school, St. Catharine’s, for nine years. In her free time, Anne enjoys the beach, especially in the winter when the only sounds are from the ocean and the seagulls.