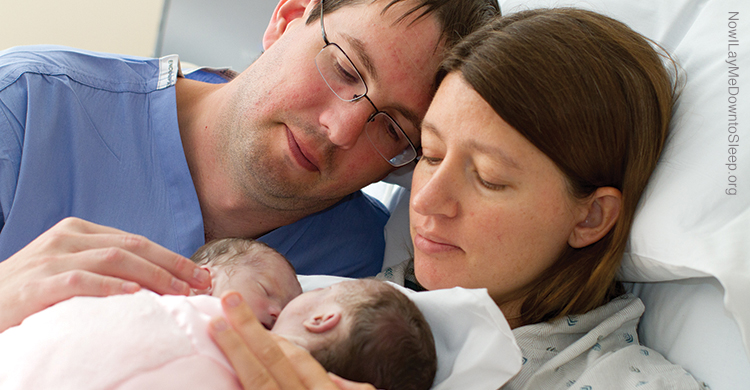 When Amy and James Fornshell of the Minneapolis suburb of Plymouth, Minnesota, learned in March 2011 they were expecting twins, they were elated. They imagined life with double diapers, double feedings, and double the baby coos and giggles. But their joy burst when an ultrasound revealed the unthinkable: The babies shared a heart.

“How can we carry the babies, knowing they will die in utero or shortly after birth?” Amy asked that day, sobbing in James’ arms. Yet, courageously they did. This is their soul wrenching journey through the valley of impending death—and the 53 minutes of life they will cherish forever.

Everything appeared normal during Amy’s first prenatal visit at seven weeks, and she and James were eager to welcome baby number four into their family of three girls. “Because of my advanced maternal age (pregnancy after age 35), I went back at nine weeks to be monitored more frequently,” explained Amy, then age 39. An office ultrasound revealed she was likely carrying twins, and a level-1 (more extensive) ultrasound was scheduled the following Monday to confirm the finding.

Amy spent the weekend researching the topic of twins on the Internet. Because they appeared so close together on the ultrasound, she feared the twins might be monoamniotic (sharing one amniotic sac) and she would need vigilant monitoring, due to the high risk of cord entanglement or cord compression. But nothing could prepare Amy, a finance manager, or James, a 39-year-old human resources information technology manager, for what was to come.

While Amy lay on the ultrasound table, the technician moved the wand over and over and over her belly. “What’s taking so long?” Amy wondered, her fears growing as dark as the examining room. “Can you find two sacs?” she summoned the courage to ask. “No,” the technician replied. “Can you confirm there are twins?” Amy inquired further. “Yes, but I was able to locate only one heartbeat.”

Later that day, the doctor’s office called Amy with the devastating news: She was indeed carrying twins and they were likely conjoined. A level-2 (more detailed) ultrasound and an appointment with a perinatologist (an obstetrician specializing in high-risk pregnancies) was ordered for the next day to confirm the diagnosis.

With James at Amy’s side, they watched the flickering monitor as the ultrasound technician took a closer look at the anatomy of their 10-week-old developing babies. “The twins are conjoined at the chest and share one heart, cannot be separated, and will probably be stillborn,” the perinatologist said bluntly, sketching the babies’ anatomy on paper. “The condition is incompatible with life, and you can terminate the pregnancy.”

James and Amy were stunned. According to Heart, a cardiology journal, conjoined twins occur once in 200,000 live births (R.E. Andrews, et al., “Echocardiographic Assessment of Conjoined Twins,” March 2006). They had suffered their first miscarriage the previous November —and now this? What should they do? Terminate?

“We’re Catholic and don’t believe in abortion,” Amy said, about the emotional and spiritual agony that ensued. She was tempted to consider abortion because, in her words, “This was a situation where the outcome wouldn’t be any different if we terminated the pregnancy or they died at birth.”

Amy met with her obstetrician to discuss ending the pregnancy. Would the attending doctor “put the babies to sleep before the actual suction?” Amy asked, concerned the babies would feel pain. “No,” her doctor replied, “the babies would be alive and their heart would be beating.” It was then Amy understood that “termination”—a kinder-sounding euphemism—was indeed abortion.

“In my mind, termination was a medical procedure performed on the baby—not abortion,” Amy said, thankful that she had had to wait for a day while pondering it, which prevented her from getting a quick abortion—a decision she and James would have regretted the rest of their lives.

Amy’s next ultrasound was administered at 15 weeks by a new perinatologist (one Amy hoped would be more compassionate). It brought mixed news. James and Amy learned they were expecting twin girls—yes, more girls! Sadly, though the babies’ heartbeat was strong, more abnormalities were found: fluid on their brains, umbilical cords with two blood vessels instead of three (resulting in diminished feeding), omphaloceles (internal organs that protrude from the navel), and markers of other chromosomal problems.

“The diagnosis is lethal, and you can terminate,” the perinatologist said matter-of-factly, as though their pregnancy were a situation to be remedied. Feeling alone and without support, Amy and James sank into a personal Gethsemane of despair. “Now what, Lord?” they asked.

Angels of hope and help

But Providence had not abandoned them, and Amy encountered an “angel of hope”: Annette Klein, an RN and perinatal high-risk support and education specialist in Saint Paul, Minnesota. Annette had helped many parents of babies with a likely fatal diagnosis, and not one had expressed regret about continuing their pregnancy, Amy learned.

“It was very eye-opening, knowing other families had been down this path and had embraced it,” said Amy. “The medical condition of our babies was unique, but the journey wasn’t.” Annette also recommended several resources (see sidebar), including the books Waiting with Gabriel and A Gift of Time, written by mothers who had carried their fatally diagnosed babies to term, and a perinatal hospice program that provides support to families before and after the death of their babies.

Within days, Amy had a referral for a pro-life perinatologist. “We want to carry our girls as long as we can, until God takes them to heaven,” they told Dr. Steve Calvin at their first appointment, his compassionate support an answer to prayer.

On Mother’s Day weekend, Amy and James told their other daughters—Lauren, 9; Shannon, 6; and Natalie, 3—about their twin sisters in Mommy’s tummy and that God might take them to heaven once they are born or shortly thereafter, and they probably wouldn’t be coming home. The big sisters prayed for their little sisters, and Amy and James asked God for the blessing of holding their babies alive.

Meanwhile, the family cherished the time they had with the twins, if only in Amy’s womb. During a camping weekend, the family went tubing on a lazy river (when Amy was 29 weeks pregnant and not very mobile!), a memory that still thrills the big sisters. “Remember when the twins went tubing?” they ask. Each night at bedtime, Amy played a favorite lullaby CD, Sleep Sound in Jesus, for the twins, a CD she had played for her other girls when they were babies.

In midsummer Amy and James met with a funeral home director and selected a burial plot in their parish cemetery. They took the big sisters shopping so each could select a special toy for the twins and then bought two of each toy—one to place in the casket and one as a keepsake. Amy also bought white burial dresses and socks. “Every girl needs a pretty dress and a pretty bow in her hair at least once,” she said, her blue eyes tearing.

Together the family picked out biblical names with special meaning for the babies: Julia Marie and Isabella Grace. Julia means “daughter of the sky [heaven],” and Isabella, “consecrated by God.”

Doctor appointments came and went. Amy and James prepared their birth plan (their expressed desire of what they wanted at birth, e.g., providing comfort care for the twins and a private room away from other newborns). A September 15 date was set to deliver the 35-week-old twins by Caesarean section.

As James held his beautiful girls, a hospital chaplain baptized Julia Marie and Isabella Grace into new life. Then the proud big sisters, grandma and grandpa, aunts and uncles, and cousins each cradled and kissed the babies. The family collected footprints, handprints, and locks of thick black hair, and snapped hundreds of photographs. This wasn’t the day the twins died, but the day the twins lived!

About 53 minutes after birth, Julia and Isabella’s tiny heart gave out. They live forever in eternity and in the hearts of Amy and James, who chose to give them life. “All they knew was love,” said Amy. “What is more beautiful than that?”

Photos appearing in this article are courtesy of Angela Boone Photography and NowILayMeDowntoSleep.org.

Resources for parents who receive an adverse prenatal diagnosis

A Gift of Time: Continuing Your Pregnancy When Your Baby’s Life Is Expected to Be Brief, by Amy Kuebelbeck and Deborah L. Davis, Ph.D. (The Johns Hopkins University Press, 2011)—This compassionate guidebook provides insights by dozens of parents who carried their babies to term, knowing they would die. Chapters include receiving the fatal prenatal diagnosis, telling children and friends, and preparing for death and the funeral.

I Will Carry You: The Sacred Dance of Grief and Joy by Angie Smith (B&H Publishing Group, 2010)—The wife of Todd Smith, lead singer of the Christian band Selah, Angie chronicles the pregnancy and brief life of her daughter, Audrey Caroline, while interweaving her deep belief in the goodness of God. Angie cowrote the song “I Will Carry You,” which ends with “And I will praise the One Who’s chosen me to carry you.”

Waiting with Gabriel: A Story of Cherishing a Baby’s Brief Life by Amy Kuebelbeck (Loyola Press, 2003)—A former Associated Press writer and editor, this mother describes with great grace and dignity her journey of discovering Gabriel’s fatal heart condition at their 20-week ultrasound to deciding to carry him and loving him into the arms of God.

Elizabeth Ministry (920-766-9380)— This American Life League Associate group is an international movement offering encouragement, hope, and healing for problems related to childbearing, sexuality, and relationships, including prenatal, infant, or child crisis; as well as miscarriage, and infant and child loss. It can provide mentoring from others who have experienced similar situations, and a wealth of resources is available through its website.

Now I Lay Me Down to Sleep (720-283-3339 or 877-834-5667)—Provides professional portrait photography (free of charge) for parents suffering the loss of a baby, in order to honor their child’s legacy. Upon request, a NILMDTS photographer will come to a hospital or other facility to sensitively conduct a private photo session. Professionally retouched digital images are then delivered on a CD or by e-mail.

Prenatal Partners for Life (763-772-3868)—Founded by Mary Kellett, of Maple Grove, Minnesota, after her son Peter was born with trisomy 18, PPFL is an international support group of parents, medical and legal professionals, and clergy that connects parents facing an adverse prenatal diagnosis with pro-life professionals and other parents who have received similar diagnoses. The website includes stories of regret by women who aborted their imperfect babies.

PerinatalHospice.org is a clearinghouse for perinatal hospice/palliative care programs and support for families whose babies likely will die before or shortly after birth. Click on “List of Programs” for states and countries offering perinatal hospice.