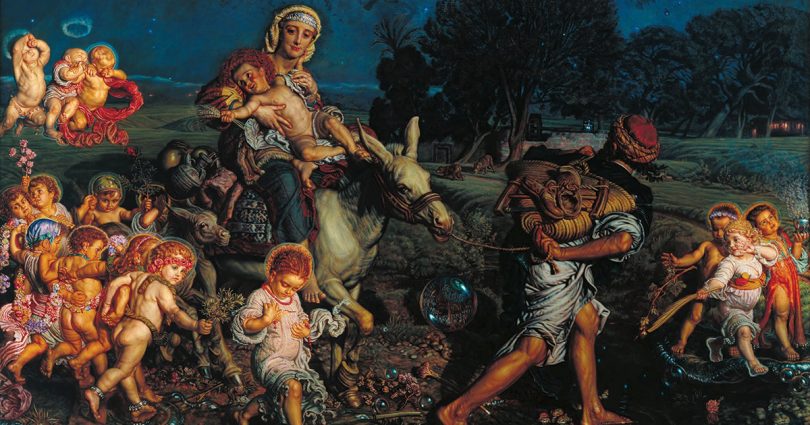 Almighty God’s mercy and grace are a warming touch of heaven upon the soul of a penitent, even if that penitent is a mother who aborted her child and even if mercy seems to take decades to manifest itself. Over 30 years ago, I was one such mother. I was a volunteer at right-to-life clinics, counseling young unwed pregnant women against abortion. Yet suddenly, I was in that same position myself.

To this day, I can see myself in the pharmacy obtaining the pre- and post-surgical prescriptions written by the abortionist. I wanted to run out right then, but what flashed before my frightened eyes were images of family members who, I thought, would call me vile names, and cheapen or make dirty that which I thought to have been an act of love, albeit outside the bands of matrimony.

I could also hear, over and over again, my fiancé’s words: His very Evangelical Protestant mother would never let us get married if she found out we had slept together, and if I wanted to stay engaged to him, I’d abort our baby. I tried to hear my child’s little voice and my heart’s own strains. But I let my fear drown them out, and followed through with what became the worst cataclysm of my life and the most difficult test of my faith—and both were of my own making.

I remember lying on the table, after being prepped for the abortion, and placing my hand upon my abdomen, begging my child to forgive me. I remembered my Catholic upbringing and being taught the importance of baptizing babies, and I desperately prayed that God would somehow give him the graces of this sacrament.1 With tear-filled eyes, I made the sign of the cross upon my abdomen and named my baby Matthew. Again, I begged his forgiveness as well as God’s, and I quietly told Him why I believed I needed to do this. I wanted to change my mind, but I didn’t. I asked God to have mercy upon my child, if not me, and let my father (already long deceased) hold and take care of him, until such time as I was called home and could hold him too—if granted forgiveness.

The following week, still devastated by my actions, I sought out a priest for advice and counsel, as well as the sacrament of reconciliation. While it took me years to forgive myself, it took only an instant for the mercy of God to take hold. And 13 years later, I saw the proof.

Soon after the abortion, my fiancé and I broke up, and over the next several years, my life began to change in many ways. I returned to college, entered the workforce, and became a married mother of four living children. With each pregnancy, I tried unsuccessfully to recapture the same sense of wonder and excitement I had during my first, before my tragic decision. While I deeply love all of my children, my subsequent pregnancies were not quite the same. They never could be. But when I found myself pregnant again in the spring of 1991, I knew that something about this pregnancy was going to be very different.

After discovering my pregnancy, ironically on the day that would have been my first child’s 12th birthday, I began a novena2 to the Holy Innocents.3 I begged them to pray for me and take my fervent petition to God. I asked that I be granted the gift of seeing the face of the child I aborted. While I had every intention to have this new baby, I was also filled with a hunger to see the face of my first child. Dutifully, each morning, after taking the kids to the parish school, I would go over to the church, sit in the back, and pray my novena.

On the night of the third day, I remember being exceptionally tired and starting to feel the effects of first-trimester pregnancy. My husband told me to go to bed, that he’d take care of the kids and make sure their lunches were ready for the next day, and he’d even get them to school in the morning. Naturally, it wasn’t long before I fell asleep, and it wasn’t long before other things occurred after that.

What some might see as merely a dream induced by praying my novena, I see as divine intervention. It’s a dream I still remember vividly to this day—over 20 years later. Shortly after I drifted off to sleep, an unseen force took me by the hand. I was told, “Come here,” followed by “Wait here.” I don’t know where I was specifically, but this place looked like the foyer of a grand house, with a staircase descending into it. Coming down the stairs was my father, holding a baby. A voice said, “Your prayer has been granted, and your own father is bringing him to you.”

As my father approached me, he was smiling, and he placed in my arms a small bundle. He said, “Look down at your son; this is your baby.” The baby smiled at me. I could hear a voice saying He had just been waiting for me to ask for this—to see my baby. Previously, I didn’t think I had that right. I stood there for what seemed like a long time, with Dad’s hand resting upon my shoulder as he stood next to me. Then the angelic force that had guided me in the night said, “It’s time for the baby to go back.” I didn’t want to let go; I didn’t want to give him back. My father looked up at me and said, “Don’t worry, daughter; you’ll see this face again.” And taking the baby in his arms, he ascended the staircase.

In thanksgiving, for the next several days, I finished the novena and prayed additional prayers. But the vision I experienced in that dream, through the gift of God’s mercy, was only the half of it.

Weeks and months went by, and then the hustle-bustle of Christmas was upon us. It was difficult to be pregnant during the holidays, with four children in tow and a husband whose own health was beginning to falter, due to a congenital abnormality. Yet I persevered, and on the second day after Christmas, my mother arrived to help me prepare for the baby’s arrival, which was expected within the next few weeks. After Mom got settled in, I decided to take a walk. I don’t know if it was the stress of caring for little children or the holiday, but I needed to get out for a bit, despite the 38-degree temperature outside and the remnants of what had been a white Christmas.

The face of forgiveness

Reflecting on the novena and the divine gift of seeing my first baby’s face, I decided to walk to the cemetery where my father’s grave was located, several blocks away, and share my heart and my hopes for this new baby. It was a brisk, easy walk there and back, and it was quite calming and peaceful to visit my father’s resting place and say a prayer. But my body also cried out for a warm bath afterward, and I quickly returned home to enjoy one. I’m not sure if this was caused by the walk or the hand of God, or a combination of the two, but that night I went into labor.

After undergoing maternity assessment at the hospital and being informed that the placenta was leaking, I was admitted. But my baby and I were facing a crisis. The baby was having trouble, and in order to keep blood flowing smoothly, I needed to lie on my left side during the entire labor; otherwise, the cord would be compressed, which would deprive the baby of oxygen and circulation. So, for the next 12 hours, there I lay. In the morning, my obstetrician informed me that my baby needed to be delivered by Cesarean section. For certain, I had experienced labor, but there had been no progression, and the baby had been in and out of slight distress all night.

A flood of memories came back to me, and tears filled my eyes as I lay in the operating room while the C-section was performed. The last time I had been in an operating room while pregnant was when I had Matthew aborted. This time, however, instead of a death, there was a celebration of life: the birth of a healthy baby girl. Elinor was born on December 28, the Feast of the Holy Innocents, to whom my novena had been directed months ago. This moment was the most marvelous completion of the circle of life.

My father’s prophecy that I would again see my baby’s face also came full circle. The face of the baby he brought to me in my dream was also the face of my newborn daughter—living proof of the mercy and forgiveness of God.

Margaret Dagastino is now the mother of eight living children, including her three stepchildren. After her husband’s death in the mid-1990s, she remarried and obtained a college degree. She writes children’s books, and works for causes that help the homeless, the hungry, and veterans.

1 The Catechism of the Catholic Church teaches, “As regards children who have died without baptism, the Church can only entrust them to the mercy of God, as she does in her funeral rites for them. Indeed, the great mercy of God . . . Jesus’ tenderness toward children . . . allow us to hope that there is a way of salvation for children who have died without baptism. All the more urgent is the Church’s call not to prevent little children coming to Christ through the gift of holy baptism” (paragraph 1261). —Editor

2 A novena is the practice of offering prayers or Masses for a specific intention for nine consecutive days. Its scriptural basis is the nine days after Christ’s Ascension during which the Apostles and Mary fervently prayed together prior to Pentecost. Praying a novena doesn’t guarantee a desired result, and such devotions must always be practiced with acceptance of God’s will. —Editor

3 According to St. Matthew’s Gospel, King Herod, the brutal ruler of Judea at the time of Christ’s birth, learned from wise men visiting from the east that a new king of the Jews had been born in Bethlehem, but they foiled Herod’s plot to learn His exact location. To eliminate a potential threat to his power, Herod then ordered the slaughter of all male children in Bethlehem two years old and under. “The Church venerates these children as martyrs . . . ; they are the first buds of the Church killed by the frost of persecution; they died not only for Christ, but in His stead” (“Holy Innocents,” Catholic Encyclopedia). The Holy Innocents are commemorated yearly on the fourth day of Christmas. —Editor

Margaret Dagastino is now the mother of eight living children, including her three stepchildren. After her husband’s death in the mid-1990s, she remarried and obtained a college degree. She writes children’s books, and works for causes that help the homeless, the hungry, and veterans.