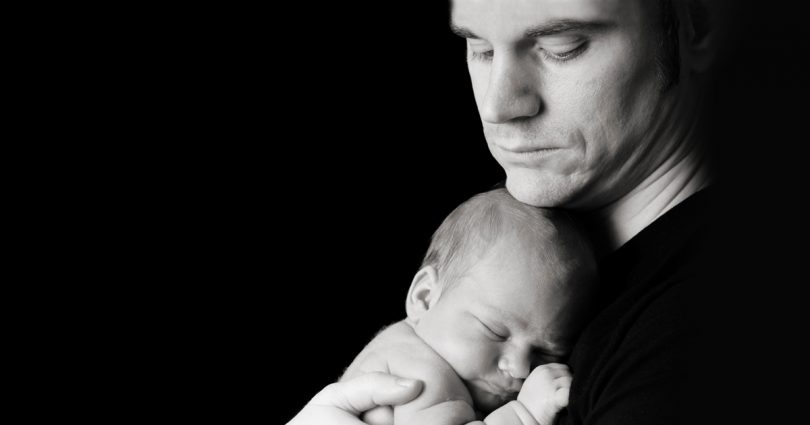 If our society has been uncharitably silent about the pain women feel from abortion, it has been even crueler to men who have been affected by the trauma of losing a preborn child—voluntarily or involuntarily— by abortion.

To create awareness, share research and personal experiences of how abortion affects men, and offer hope for healing, the second Reclaiming Fatherhood conference was held in Chicago on September 8 and 9. The first such conference was held in San Francisco in November 2007. Both conferences garnered a surprising amount of “mainstream” media attention, given that there is widespread and often vehement denial of post-abortion trauma in secular circles.

Speakers at this year’s conference presented studies and stories of men’s pain and grief resulting from involvement with abortion. It was sponsored by the Knights of Columbus, coordinated by the National Office of Post-Abortion Reconciliation and Healing and attended by 150 people, representing 27 of the United States and four countries.

“What we overlook is, in every abortion experience, there is a man involved in some way,” Vicki Thorn, founder of Project Rachel and executive director of NOPARH, pointed out in her opening address. “There have never been so many fathers whose lives have been touched by abortion in a room together.”

While the first book on men and abortion was not written until 1984, the stories of those who have undergone the pain of an abortion began much, much earlier than that. The Reclaiming Fatherhood conference began with the testimonies of several post-abortive fathers.

Bruce Mulligan, a facilitator of a men’s post-abortion healing group, recounted the tale of his fiancée getting pregnant just months before their wedding. Their abortion decision, a product of fear of expulsion from the Christian college they  attended, saddled their new marriage with the debt, shame, secrets and guilt of their decision. Energy that should have been directed toward positive things in the new marriage was instead directed to keeping a terrible secret. Referring to a popular pro-life bumper sticker, Mulligan said that it needed to be updated. “I’m here to tell you, from personal experience, it is one dead, two wounded,” he said. “Or even one dead, many wounded.”

When Jason Jones and his girlfriend discovered she was pregnant, he dropped out of school and joined the Army to support her. He received a call while at boot camp that her parents had forced her to get an abortion. He was so enraged that when the drill sergeant took the phone and hung it up, Jones punched him. His anger and pain lit a fire under him, and he promised that he would end abortion. Unaware of other prolife organizations, he began going door to door in his free time to talk to people about abortion. He previously served as Hawaii Right to Life’s director and Human Life International’s public relations director, and was a producer of the pro-life movie Bella.

Rev. Brian Walker spoke of the pain he and his wife endured following the abortion of their first child, Stephan. Having put his faith on the shelf, Rev. Walker mournfully told of how they had “sacrificed their child on the altar of convenience.” Even though he did not pressure his fiancée into the abortion, Rev. Walker considers himself as having broken his promise to love her, and her resentment and anger towards him created a 17-year “silent hell” in their marriage.

“If there have been millions of men who have been wounded by abortion since 1973, where are they?” asked Greg Hasek, a marriage and family therapist and executive director of Misty Mountain Family Counseling Center in Portland, Oregon. “Until we find the answer to that question, those in the media, those that do not believe abortion hurts men, will continue to believe they are not there.”

While men are typically portrayed as forcing the woman to get an abortion, Vicki Thorn explained the many roles a man can play in a woman’s abortion. For instance, a man may be vehemently opposed to the abortion, but denied a say in the matter. Or he might oppose the abortion, but feel voiceless as everyone around him says it is the woman’s choice. He may also find out about the abortion afterwards or might even be a grandfather, brother, uncle or a friend who helped another obtain the abortion.

We are only just beginning to recognize the hormonal impact that pregnancy, as well as abortion, has on men. Thorn explained that in some cultures, the hormonal reaction is so strong that the man experiences “couvade,” a sympathetic pregnancy and labor. While that may be an extreme case, researchers have found that there are shifts in male hormones and pheromones when a man’s partner is pregnant, including increases in prolactin, the nursing hormone that makes the man more helpful, and vasopressin, a bonding hormone. When the pregnancy is abruptly terminated, as in the case of abortion, men are unable to complete the hormonal cycle. Thus abortion’s damage to men may be biological as well as psychological.

Vincent Rue, Ph.D., director of the Institute for Pregnancy Loss in Jacksonville, Florida, explained that in many ways, men’s experience of abortion mirrors that of Vietnam War veterans and the discovery of posttraumatic stress disorder. So far, the most reliable data is anecdotal—just as identification of individual cases of PTSD in soldiers preceded organized studies. So far, there have only been 28 studies of men and abortion, and only two of them included more than 1,000 men in the sample.

“Abortion is the most common surgical procedure in the U.S.,” said Dr. Rue. “We know this: In every abortion, fatherhood too is lost.” Therefore, regardless of the exact number of abortions, the number of men affected is tremendous. Hasek estimated that onequarter to one-third of all men in America are post-abortive.

Hasek also remarked that the most common reason for men to grieve is the loss of a father relationship and fatherhood. Since it is socially taboo for men to show feelings, men tend to seek help for their pain less than women. And since it is not politically correct for men to be affected by abortion, most therapists do not ask men if there is an abortion in their past and the wound goes untreated.

“Our sexualized culture provides a perfect backdrop for men to act out their unresolved grief from abortion,” explained Hasek, who asks new male patients about past abortion. “What I’m finding right now is about 50 percent of the guys who come to me for sexual addiction have an abortion in their history.”

While it only constitutes anecdotal evidence, Catherine Coyle Ph.D., codirector of the Alliance for Post-Abortion Research and Training, said that one study on homosexuality (J. Berger, “The psychotherapeutic treatment of male homosexuality,” American Journal of Psychotherapy 48[2] [1994]: 251-261) mentioned a couple of cases in which men began entering homosexual relationships after a partner’s abortion. While it was merely an aside in the study, both Dr. Coyle and Thorn confirmed they have seen similar cases of abortion triggering homosexuality in men.

The Reclaiming Fatherhood conference not only explored research on the ways in which men are hurting from abortion, but new healing models as well. Since men feel and process emotion differently than women, healing programs and therapy designed for women are ineffective for men.

Tom Golden, a licensed clinical social worker and the author of Swallowed by a Snake: The Gift of the Masculine Side of Healing, explained specific differences in how men grieve, observed in his experience and research in therapy. While his graduate school training emphasized eye contact, Golden found that men interpreted this as threatening and that in one-on-one sessions, arranging the chairs in a side-by-side position was more productive.

Men also use a different part of the brain to process feelings than women, and as a result, even answering the question, “How do you feel?” can be difficult for a man. Questions about physical sensations, such as, “What is your body telling you?” or “How does your body feel?” will generally be more effective at helping a man to express his emotions.

Most importantly, Golden explained that men grieve through action, while women grieve through interaction. While it may appear as withdrawal, men will find the most healing through repetitive activity, whether physical, such as memorializing their loss; mental, expressed by reading or writing; or creative, exemplified by rock star Eric Clapton writing the song “Tears in Heaven” after his own son’s accidental death.

The tremendous pain felt in the aftermath of abortion can lead to anger at oneself, anger at others and anger at God. While a religious approach to healing may not be effective for every post-abortive man, Thorn very powerfully reminded men who had lost their fatherhood to abortion that they are never alone in their grief: “I believe God the Father understands your pain, because His Son died.”

SIDEBAR: Where to get help

The following is by no means a comprehensive list, but an introduction to a few of the resources now available for men who have been involved in abortion and those who help them.

LifeIssues.org/men/MAN/index.html The Men and Abortion Network is comprised of several groups that offer services to men hurting from abortion.

ProjectRachelKC.com/HelpforMen.html This is Project Rachel’s post-abortion outreach program for men.

Healing a Father’s Heart: A Post-Abortion Bible Study for Men

by Linda Cochrane ISBN: 978-0801057229 This book presents a practical program for helping men to work through the grief caused by an abortion.

Men and Abortion: A Path to Healing by Dr. C.T. Coyle

ISBN: 978-0919225237 Based on the author’s own research, this book provides a tested and effective grief counseling program for post-abortive men.