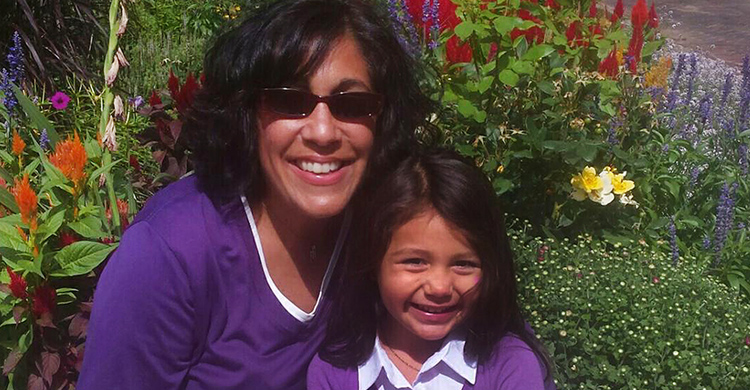 A sonogram brings home the beautiful reality of motherhood

Three-and-a-half years ago, single and pregnant at age 45, afraid to tell her family, an abortion was very much on her mind.

At that point in her life, Alice Vega’s life had changed dramatically. After 14 years, she and her husband had gone through a gut-wrenching divorce.

“I’d raised four step-kids,” she added, “and didn’t want to disappoint them.”

The divorce was devastating. To cope, Alice took up running. “The physical activity kept me sane,” she says.

Two years after, longing for companionship, Alice began dating a coworker and was romantically involved for a year before differences caused a separation.

Depressed, Alice drifted. She finally decided she needed to do something positive to change her life and signed up for the Chicago Marathon. She began putting in many miles running. One day, on a long training run, her body shut down. “I didn’t know what was wrong,” she says.

Although she was healthy, Alice had wildly irregular periods. Her doctor had put her on birth control pills to correct the problem, and more recently, he’d wanted to do a hysterectomy. Alice had declined. She was training for a marathon!

“I’d been doing a lot of running,” she said. “I was in great shape. I just couldn’t figure out what was going on.”

A girlfriend had a suggestion that made her laugh. “Maybe you’re pregnant.” Still, Alice thought it over. She hadn’t seen her ex-boyfriend for over a month, but . . .

She kept the news to herself for three weeks, her mind racing. Would the baby be okay? Could she carry it at her age? How could she support a child? She couldn’t keep from crying.

Did you consider an abortion? I ask. Her eyes widen.

“Oh, yes!” she says emphatically. “I was so terrified. I couldn’t see any other way out.”

She finally got an appointment for a sonogram at the OSF Galesburg Clinic operated by The Sisters of the Third Order of St. Francis. Alice reports that the woman who did the sonogram was wonderful. “She was so nice and so understanding,” she says.

Right until she looked at the sonogram, Alice was still considering abortion. “When I saw the heartbeat,” she says, “and actually saw the baby, it was a feeling I couldn’t describe. I fell in love. I was pregnant with a baby!” Alice went out to her car and sat in the parking lot, looking at the sonogram. “I was sick at heart that I’d even considered an abortion,” she says. “I cried and cried.”

She learned she was actually past the first trimester. “I’d been running all that time and even drinking wine,” she says. “I was so scared I’d caused something to be wrong with the baby.”

Further tests confirmed a healthy girl. What decision would Alice have made if the baby hadn’t been okay?

But Alice was still afraid to tell anyone, even her mother. “I didn’t know what their reactions would be,” she said. Her sister was the first one she told.

“She was so supportive,” Alice says. “She went with me to tell Mom.”

To her surprise and great relief, her mother and family were wonderfully supportive of her decision to give birth to this child.

Alice says he’s been amazing. “I told him, as long as he puts the baby first, he can be in her life,” she says. “The thought that she’d be raised without a father broke my heart. So I gave him a chance to step up, and it’s worked out.”

A tall, slender man walks in the back door to Alice’s kitchen, and I have no doubt who he is. The little girl beams with happiness and runs to the man’s arms.

Alice smiles. “She loves her dad,” she says. “All I asked him was to be there for her, and he’s been so supportive. We’re working on trying to be together. I know everyone wants us to be married, but sometimes life doesn’t work out that way.”

The baby’s father lives across the street. He works nights and cares for his daughter during the day while Alice is at work. He helps with finances and does whatever he can to help raise the little girl. “He goes grocery shopping with me,” Alice says, “he mows the lawn, takes out the trash, cooks. . . .”

She doesn’t know what the future holds for herself and the baby’s father, but she says, “I know in my heart that God is here for us. I am open to God every day, and I am thankful every single day for my blessed family.”

“Having her was the scariest thing I’ve ever done,” Alice says. “But I’m really happy with the way things have turned out.”

The smiles on Adelita’s and her daddy’s faces agree.

Judie Gulley is a Catholic freelance writer from Illinois. A retired secretary, school bus driver, and massage therapist, she’s written over 500 articles for both Catholic and secular publications, and published two young adult novels as well as a collection of short stories.